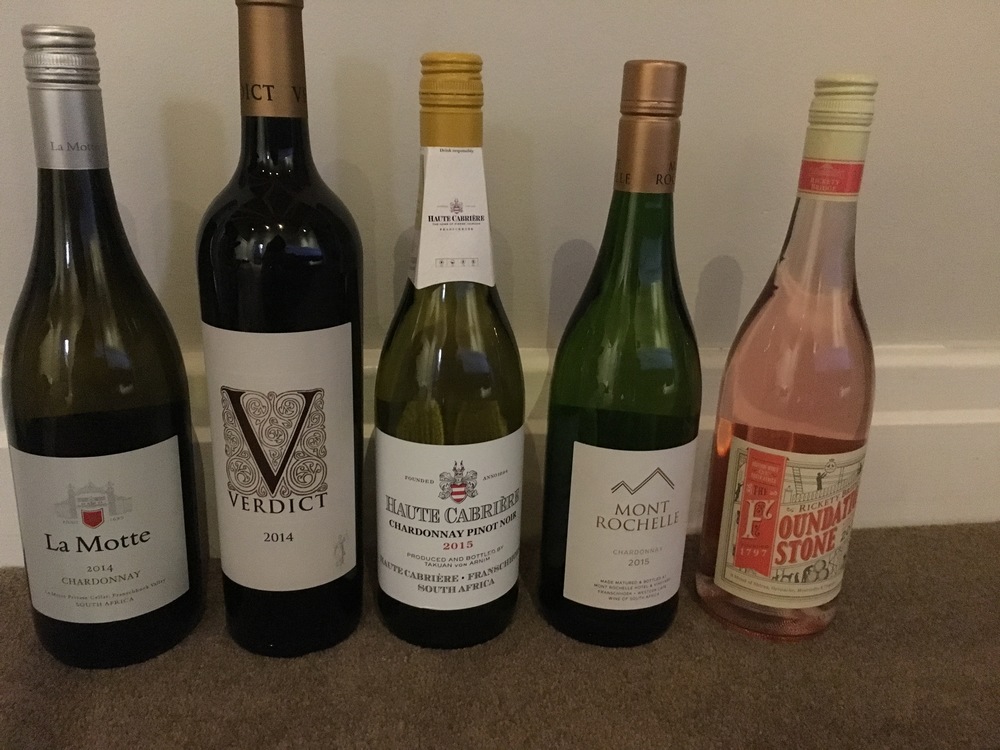 Before we arrived in South Africa, I was convinced that we would use the Wine Tram to go wine tasting, their hop on, hop off service sounded like it could be fun. When it came down to booking it, I couldn’t decide which of the four tours to do, not knowing any of the wineries made it difficult, so we left the decision until we arrived at our hotel in Franschhoek.

Osmond, the concierge at our hotel confirmed that the Wine Tram was available for the following day or if we preferred he organised small group tours of 5 wineries including a cellar tour, tastings and lunch. Opting for the latter, we set off at 10.45 the following morning with Jonathon, who was going to be our guide and driver for the day. Our cellar tour and tasting was conducted by Avron, a lovely guy who was so passionate about wine and the history of “the little farm”. They have 100,000 vines on the farm and produce around 100,000 bottles of wine per year. We learned a lot about the local wine culture during our time here, for example to be called a wine estate, the wine has to be bottled and labelled on location. If a farm doesn’t invest in this expensive equipment they can hire a bottling van with a mini production line when required. We also discovered that although Sauvignon Blanc is hard to grow in the region due to the climate, it accounts for half of the farm’s production, as it’s the country’s most popular wine. At Le Petite Ferme they harvest the Sauvignon Blanc at 4am to protect the harvest from the high temperatures and hot sun. We laughed at the baboon story and how the winery came to produce their Baboon Rock. You are not allowed to feed or kill the baboons, and they love to eat the Chardonnay grapes which grow in the mountains. The farm has tried scaring the baboons away by throwing rocks, but they just came back at night, when the workers had gone home for the evening. Baboons are scared of snakes, so another attempt was made to keep them away by using fake rubber snakes amongst the vines, the clever baboons learnt to throw rocks to test if they were real and posed a threat, before feasting on the grapes. So a truce was called, and a wine created in honor of the biggest baboon, there’s around 70 of them that visit the farm.

We were saddened to hear of the fire which left only the foundations standing, although good came of it and all the staff helped build a bigger and better version of the farm as seen today. Despite the high fire risk in Franschhoek, their nearest fire station is an hour away.

We discussed the merits of American Oak versus French Oak barrels, did the €1,000 price difference per barrel warrant the romantic notion that wine tasted better from French Oak. The screw top was another topic, it’s inevitable that this seal will become standard in the future. We all love the pop of a cork, but the test results over recent years, have proved screw cap is better for the wine.

Although all of the staff at Le Petite Ferme would personally like to take the credit for their fabulous wines, from the farm labourers to the ladies who work on the final blend purely by their nose, the wine success is due to the magic found on this wine estate.

90% of Le Petite Ferme wine is sold onsite, only 10% of production is shipped to the UK, where it is also distributed to America.

We tasted 4 wines including the Sauvignon Blanc 2015, Batonnage, Cabernet Sauvignon and Verdict 2014.

We purchased a bottle of the Verdict, this red wine is a blend of 80% Cabernet Franc, 10% Merlot and 10% Cabernet Sauvignon. It is deep garnet in colour, with mulberries, cherries, liquorice and spice on the nose.

Haute Cabrière
Our second tasting was only a moment, away, Haute Cabrière are situated on the other side of the road, sharing the same stunning view across the Franschhoek valley. This winery was on my to do list as it had been recommended to us by a travel writer via social media. I was eager to try the Pierre Jourdan bubbles and visit their cave restaurant. As it was a beautiful day, we sat outside on the terrace. We tasted 6 wines at this location which included the Brut & Belle Rose from the Pierre Jourdan range, followed by the Chardonnay Pinot Noir 2015, Unwooded Pinot Noir 2015 and Pinot Noir Reserve 2013 from Haute Cabriere range. Our final wine was the only sweet wine of the day, Ratafia which is produced from 100% Pinot Noir. We purchased a bottle of the Haute Cabrière Chardonnay Pinot Noir, this wine was created out of diversity when the 1994 crop was small and not suitable for the Pierre Jourdan Cap Classique. The blend of 60% Chardonnay and 40% White Pinot Noir was a success and has remained in the range ever since. We liked the interesting concept and balance of this white wine, which has notes of peach and lychee. We were so surprised by the Rose that we bought a bottle, which is unheard of, we rarely ever drink rosé wine. The Foundation Stone Rose 2015 is 38% Shiraz, 37% Grenache and 25% Mouvedre. The grapes were harvested by hand in the early hours of the morning, and the skins only left in place for 2-4 hours. 10% of the wine was fermented and aged in French Oak barrels and the wine was aged on lees for 6 months. It’s a French style Blanc de Noir. This is a dry rosé with cherries, strawberries and a hint of Turkish Delight on the nose.

Leopard’s Leap
By 2pm we were definitely ready for lunch! Jonathon took us to Leopard’s Leap, a family vineyard created at the turn of the century. We had one thing on our mind…… food! The relaxed rotisserie buffet style restaurant here is interesting, you pile a selection of salad onto your plate which is weighed along with a choice of meat. We decided on the slow cooked lamb, which was tasty. After a small dessert and coffee, we were good to continue our tour. We bought a bottle of the La Motte Chardonnay 2014. The Chardonnay grapes are grown from one specific site in the Franschhoek area, these are combined with a secret French barrel selection to produce this classic Chardonnay.

Mont Rochelle
Our final winery was Sir Richard Branson’s Mont Rochelle South African Hotel and Vineyard. We were booked in to do the White Wine Flight which included Little Rock Blanc, Sauvignon Blanc and Chardonnay, all from 2015. We bought the Mont Rochelle Chardonnay 2015 this wine has been aged 55% in oak and 45% in stainless steel to preserve the aromatics, before 4.5% of Viognier is blended to lift the aromatic profile. The wine is pale straw in colour and contains fresh citrus tones, with notes of apricots and peach. The finale of our guided tour included a stop on the Franschhoek pass to see the baboons who can generally be found feeding in this area each day between 4-5pm. Our private wine tour cost R1200 per person (€60) and included tastings at 5 wineries, lunch, transport and guide for the full day.

Môreson Family Vineyard
We also visited the Môreson vineyard, run by the Friedman family on a friend’s recommendation the day before, on our arrival in Franschhoek. They have a bread and wine vineyard restaurant, which was just closing as we arrived, although we were able to enjoy a tasting and bought 3 wines. Our selection included the FYM2012, (Fox.Yankee.Mike), Mercator premium Chardonnay 2013 and Solitaire (Methode Cap Classique). The interesting names have a aviation theme due to the influence of a pilot in the family. It’s worth noting that some of the 105 wine farms in Franschhoek close during the quieter winter months, from June to September.

Having bought 8 wines during our tastings, we will have to select 3 of them to enjoy in South Africa before flying home.