When’s a good time to visit the Far East? 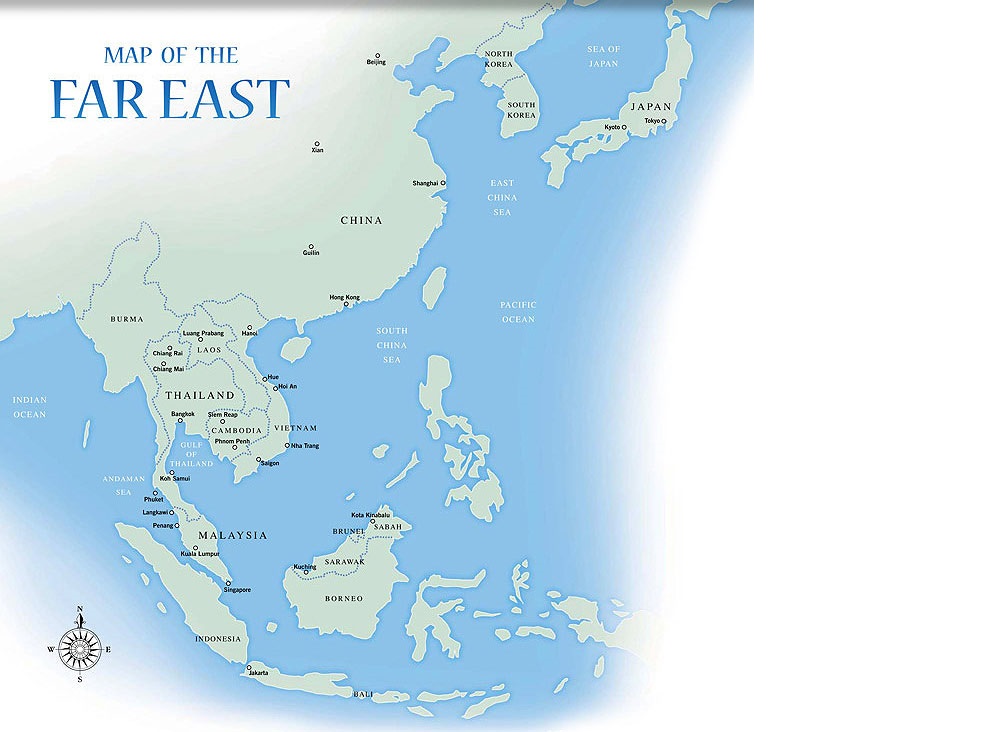 The best time to visit Bali is in the dry season (May to September) although it’s generally considered an all year round destination with temperatures only fluctuating a few degrees from an average of 27-29 degrees. Monsoon season is October to April.

Bangkok is hot all year round with average temperatures of 30-35 degrees. The best time to visit is December and January when it’s cooler and drier. The rainy season is from May to October.

Beijing has four seasons. Spring (April to May) is windy and dry and prone to sandstorms, temperatures can vary from –14 at night to 12 degrees in the day. Summer (June to August) is hot and wet, heavy rainstorms are common and the average temperature is above 24 degrees can reach the 40’s. Autumm (September to October) is the best time to visit with cooler temperatures and plenty of sunshine. Winter (November to March) is cold, the average temperature is below zero with lots of sunshine.

Borneo has an unpredictable tropical climate and average temperatures range from 27-32 degrees. The main tourist season is May to September, whilst generally the most rainfall occurs from November to March, there isn’t a clear dry period.

Burma has a monsoon climate, the driest time to visit is February to May which is also the hottest time of the year with temperatures reaching 30-35 degrees. The monsoon season stretches from May to October with temperatures of 25-30 degrees, and the winter months October to February are drier and cooler at 20-25 degrees.

The best time to visit Hong Kong is November to February as these months have the least humidity and average temperatures of 17-22 degrees. The hottest months are July to September with an average temperature of 29 degrees and the rainy season is April to June.

Temperatures vary greatly in Japan with the average spanning from as low as 6 up to a high of 27 degrees. The best time to visit Japan is spring (March to May) expect average temperatures of 9-19 degrees. The monsoon season is in summer (June-July).

Laos has a dry season from October to April and wet season May to September. The best time to visit is in March and April, the early months of the wet season (May & June) is also the hottest time of the year, with short periods of rainfall. Average temperatures range from 23-29 degrees, and as high of 35 degrees during March and April.

Malaysia has a year round tropical climate enjoying average temperatures ranging from 23-32 degrees. The west coast islands including Penang, Langkawi and Pangkor are best visited during December to April, the rainy season is April to October. Whereas the east coast including Kuala Terengganu, has the best weather from May to October, and the monsoon weather during November and December. The capital of Kuala Lumpur is 30-32 degrees most of the year and best visited from June to August when there is less rainfall.

The best time to visit Shanghai is during the spring (March to May) when it’s pleasantly warm rising from an average of 9 to 20 degrees. The summer tends to be hot and rainy with temperatures reaching mid 30’s. Autumn is comfortable and cool 14-19 degrees and the winter is generally overcast and cold when temperatures drop to an average of 5 degrees.

Singapore is known as an all year round destination, the monsoon season is from November to January.

Hanoi is best visited from November to February, March to October is hotter with more rainfall. Hoi An, Hue and Danang are best visited in May and June, this region is affected by monsoon winds from September until January. Nha Trang is lovely most of the year, best to avoid November and December. Likewise with Phan Thiet and Mui Ne anytime other than September to November. The best time to visit Saigon is from December to March, the average temperature is 31-35 degrees and the rainy season May to October. The island of Phu Quoc is at it’s best from November to March with average temperatures 25-28 degrees, the monsoon is from July to September.