Visiting The Peak In Hong Kong 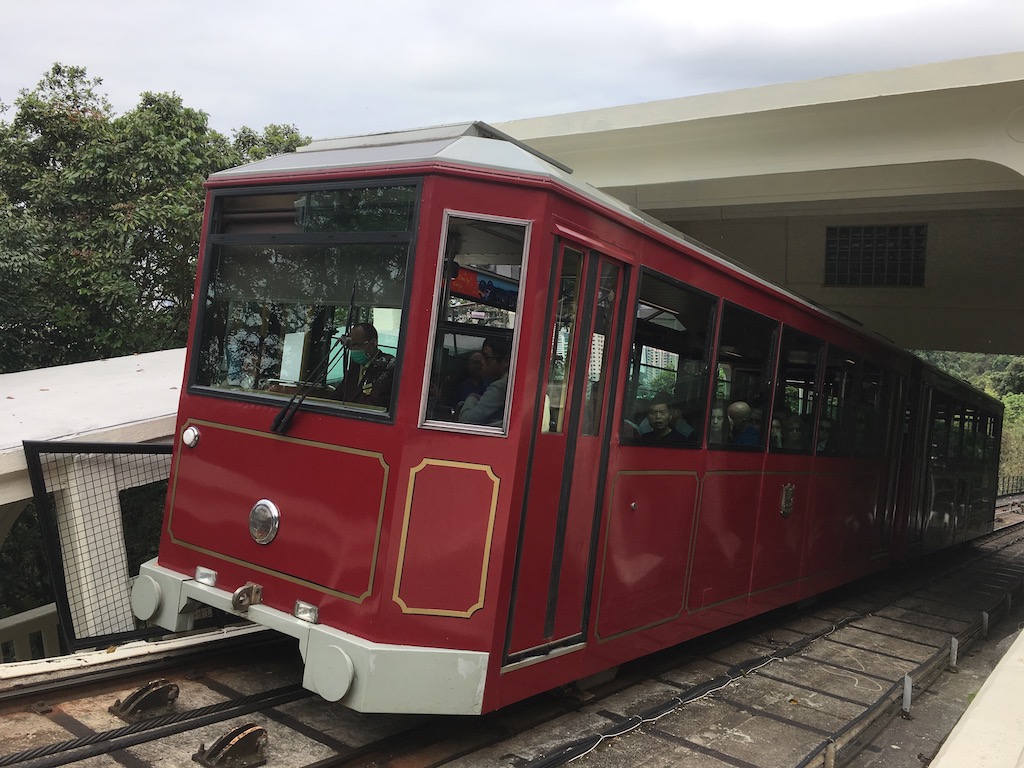 Hong Kong’s peak is 550 Metres above sea level, so it affords incredible views of this most spectacular city, the harbour, and Kowloon, across the water.

There are basically three ways to get up there – by car, on foot, or via the world famous Peak Tram, which has been running for around 120 years. We chose, quite sensibly, to go up on the tram and to come down on foot! The tram station is in Garden road, and easily accessible from Central district and it is well signposted. The tram and line were a work of British Victorian engineering in the 1880’s, when they were looking for a way to allow people to travel easily between their homes at mid levels and the peak, and their offices in central. The tram is single track, with a central twin section for overtaking, and the machinery is built underneath the top terminus. There are four intermediate request stop stations en route. At times, the route is incredibly steep, leaving you wondering how much power is need to pull the cars up the slope. It was once a mode of transport, but it is now very much a tourist attraction. Prepare for lengthy queues on clear days, when a lot of people want to head to the peak. You can pay using an Octopus card, or the cash price is HK$45 return or $32 single. There are displays showing the history of the tram company. Views going up aren’t great – you need to look backwards to see the city as it gradually reveals itself through the trees.

Arriving at the top station, you alight into The Peak Tower, which is a shopping centre with one of the world’s great views. The centre is shaped like and anvil and is almost all glass, so wherever you are – perhaps buying some clothes, or enjoying a coffee or a meal, you can see the city below. If you want to get to the very top of the building, for the best view of both sides of the island, you’ll need to stump up an additional $45 to visit Sky Terrace 428. We’d highly recommend doing so, because the views, uninterrupted by glass, are incredible, and there are telescopes you can use to see the city, and Pok Fu Lam reservoir and Lantau island in the other direction. We decided to walk down Findlay Path, named after the man who built the Peak Tram, to get back down to central. Be warned, even though it’s downhill, it’s a thigh burner! The path is incredibly steep in places, and could be slippery when wet. There are plenty of benches on the way down, if you need a rest. You eventually come out into the botanical gardens, which are completely free to walk through, and you can enjoy seeing the animals, birds and plants there. You eventually come out where you started, by following the roads all the way down to statue square. A fabulous few hours!