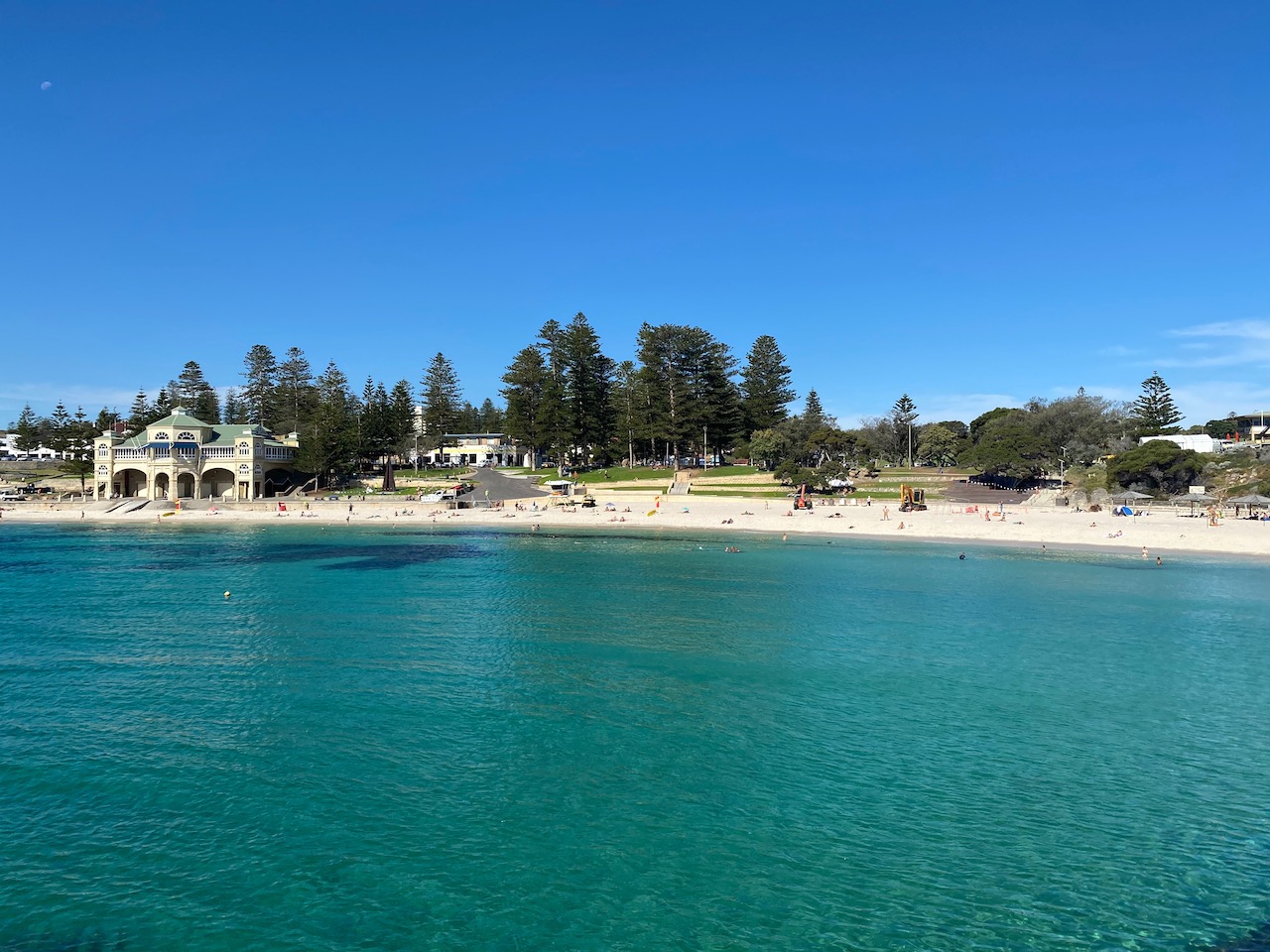 Perth, was our first stop on our Australia trip in March 2020. Colonised by British Captain James Stirling, the Swan River Colony was founded in 1829.

Perth, the capital of Western Australia is known for being the most isolated city in the world.  Locals soak up more sunny days here, than in any other Australian capital city. Flanked by beautiful white sand Indian Ocean beaches at Cottesloe or Leighton and surrounded by the great Australian outback. You can find the perfect balance of city & nature in Perth.

Elizabeth Quay is a lovely place for a stroll in the evening. The quayside is lit up with neon lights after sunset, including the rainbow coloured BHP Billiton Water Park.

You can’t miss the giant bird in a boat sculpture, known as First Contact by Laurel Nannup.

There’s a labyrinth of laneways and arcades within the city of Perth, which were designed to keep residents out of the heat. The brick walls tend to be decorated with murals and access to hidden bars. We visited Wolf Lane twice, considered to be one of Perth’s coolest laneways. Once for breakfast at The Wolf Espresso, then again in the evening for a drink at the Cheeky Sparrow. London Court on Hay St is a quirky place styled from the Tudor era with boutique shops and cafés, built in 1937. Have a look at the entrance clocks, there’s a replica of the Great Clock at Rouen with 4 knights that move when chiming, at the other end is St George battling a dragon.

During our Eat Drink Walk Perth – Bar Tour we also visited Helvetica (specialist Whisky bar) in Howard Lane which has chandeliers at either end of the laneway for reference to the historic grand ballroom that once existed on this site. We were intrigued by the Foxtrot Unicorn Bar at basement level 101 St Georges Terrace. Situated in an old bank vault, with upcycled vintage furnishings, this bar is found on reputation rather than signage. We met Dimitri the owner who explained it’s not a speakeasy, more an ode to good booze. Another find during our bar tour was the underground Caballitos (the little horse) on Queen Street, a place for tequila, tacos & bad decisions! The Flour Factory is a gin bar located over 3 floors including a roof terrace, in an old flour mill, situated on Queen Street.

The Lotterywest Federation Walkway was definitely on our list of things to see during our time in Perth. We wanted to walk on this elevated pathway amongst the treetops to witness the spectacular views of the city skyline over the Swan and Cannings Rivers.

Entry is free and open from 9am to 5pm. For the adrenalin junkies you can combine this with Jacobs Ladder, a challenging pathway with 242 steps.

Cottesloe is a beach side suburb in Perth, and the place to head for if you want a beach day whilst visiting this city. The iconic Indiana Tearooms still stand, however their future is currently under debate.

We enjoyed a seafood lunch at the Blue Duck and a walk along Marine Parade. It was easy to get there, we walked through King’s Park to Crawley (8km) then took a taxi, returning by train ($4.90pp). There was lots of activity preparing for the Sculptures by the Sea exhibition, which was due to start 3 days later.

Rottnest Island is about 18KM off the coast of Western Australia. It’s beautiful, but it has a pretty dark history.
First landed by the crew of a Dutch ship in the 1690’s, they named it Rottnest (Rat’s nest in Dutch,) because they mistook the native Quokkas and their nests for very large rats.
In the 19th century, it became a prison island for aboriginal prisoners, in the 20th century a prison of war camp, and at one stage reformatory island for badly behaved boys.

Cycling is a popular method of transport

Quokka in the picnic area

Quokka under a tree

In these more enlightened times, it has become a wonderful holiday haven, with stunning beaches, fascinating salt lagoons and a plethora of wildlife, including something like 12,000 quokkas – charming, curious marsupials, who hop around the place, looking extremely cute.
The ferry takes 30 minutes from Freemantle, and you can visit for the day, as we did, or stay in accommodation there for a few days at a time.
We walked 15KM around the coast, and through the salt lakes, and there are loads of information boards explaining the history of the island and the various buildings you come across.
Fremantle
We only spent a short amount of time in Fremantle. The first thing you notice when leaving the train station is the mythical beast sculpture Chimera. We were on the lookout for a breakfast stop before our ferry, Chalky’s was an excellent choice. It’s situated next to the Round House and a short stroll from the B Shed, where we were due to board the Rottnest Express ferry.

Man & Dingo at the ferry port

Deciding to eat again in Fremantle after our day trip to Rotto we bought fish & chips at Cicerellos in the Fremantle Fishing Boat Harbour as the sun was setting.
Swan Valley
Our last day was devoted to wine! We had booked a full day tour with Andy from Stylish Kombi Tours. Our transport was a gorgeous VW kombi van, in fabulous condition. The Swan Valley vineyards were approximately a half hour drive from our hotel, we were served bubbles and given control of the tunes. We started at Pinelli, an Italian winery. Moving on to Yahava Koffeeworks to load up on caffeine. Little River was next, a French winery.

Mead tasting at the Honey House

Toffee Topaz
Then we met Ryan from Old Young’s who gave the best ever tasting demonstration of vodka and gin! Our lunch stop was Rustique. Time for more wine at Twin Hill a Croatian winery with a dancing cockatiel. Mead tasting at the House of Honey, before our last stop at another Croatian winery called Windy Creek. The boot was full of our purchases, we’d had a fun day and met some interesting characters along the way.
That wraps up our 3 days in Perth, next stop Adelaide.

Visit our Perth photo album on Facebook for more photos and information.