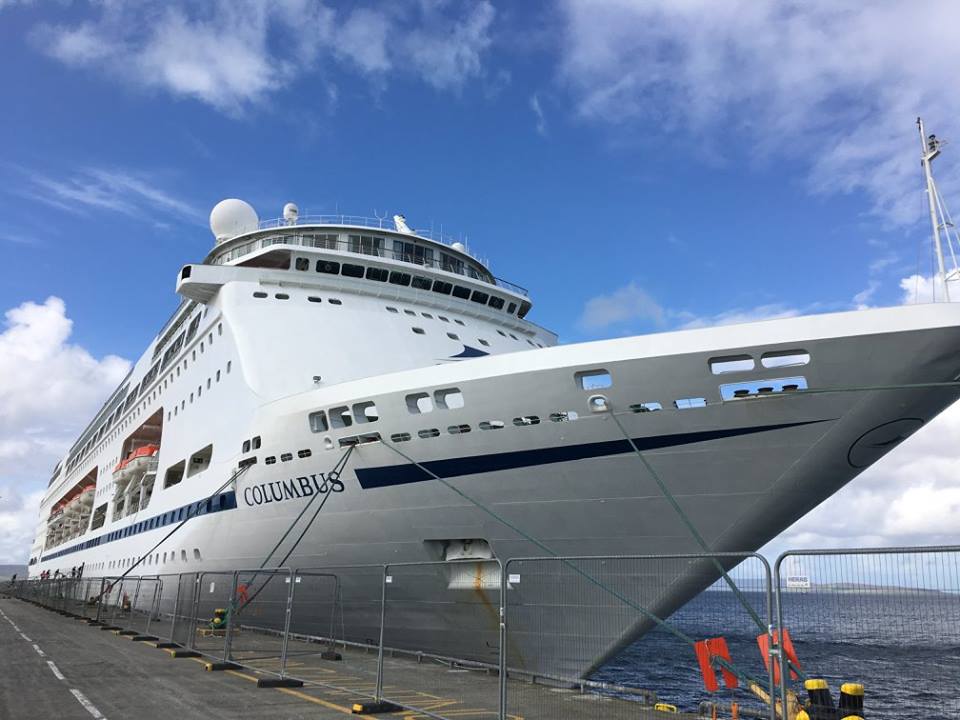 You can read the detail of our trip around the British islands and Highlands elsewhere on the website, but these are my personal thoughts on my first cruise experience. I should say that I approached this with some trepidation – I’ve never seen myself as a “cruising type” because we prefer holidays where we are in control of where we go, what we eat and we love exploring new places, so being aboard the same ship for 7 days was always going to be a challenge. But as it turned out, I thoroughly enjoyed many parts of the experience and I’m left keen to try another cruise in the future. So here are my thoughts:

Cruise and Maritime Voyages are a small company, and their service, from the moment of booking to disembarking the ship was just fabulous. As a travel agent I seem to spend my life going around in circles on automated switchboards, but with CMV I always got straight through to a real person who was able to help me quickly and efficiently. And that extends to the people at Victoria coach station and all the crew aboard ship as well. The service is competent, friendly and you get the feeling they really care about you.

The crew have multiple jobs – on each excursion we were accompanied by a couple of crew members, who not only looked after us, but they also got involved with what we were doing.

Columbus was built in the 80’s and served with P & O and several other lines before CMV took her on and refurbished her as their flagship earlier this year. These days, she would be described as medium sized and that means she can get into ports the really large ones can’t and that there’s an intimate feel aboard – by the end of the trip, we were regularly bumping into “friends” all over the place.

It might sound strange, but I also think ships like Columbus are much more attractive than the current giant ships, which look like top-heavy blocks of flats!

I was really amazed at the cabin, which was much larger than I expected. It was about the size of a decent 4 star hotel room, but with much more space to put clothes away – I kept losing things in the drawers as there were so many of them! Even the bathroom was a decent size and the shower was spacious hot and powerful.

I liked being on deck 10, which meant we were well away from any engine noise and vibration, so I’d recommend higher decks to anyone, and we loved having a large window with an unobstructed view.

As you’d expect, there are plenty of bars aboard Columbus – you’re never more than a few steps away from the nearest, and the drinks and service are superb. We elected to take the drinks package, which cost us £17 per day each. That included all the standard spirits, beers, house wine and cocktails, and gave us a decent discount if we chose better wine or premium spirits. Having said that, the drinks aboard ship aren’t expensive – a little cheaper than typical British pub prices. I would recommend the package, though, because it would be too easy to spend a lot without realising it, as the ship is cashless, so unless you tot up your receipts, you don’t really know what your bill is going to be at the end of the trip.

I fully expected the entertainment to be a let down, but I was amazed! The entertainment team were really very good, and the shows they put together were worthy of decent live performances you would normally pay a lot of money to see. There were some real stars among them as well – the lead vocalist, Raul, a most incredibly versatile violinist called Tatyana and a female singer whose name escapes me, but who could sing most things, but who also had the most amazing operatic voice.

Waking up in a new port every day

I loved this aspect. As mentioned, we like to move on and discover new places, so travelling overnight and waking up each morning in a new port was perfect for us.

The itinerary also appealed to us – we travelled to Orkney, Shetland, The Faroe Islands and Invergordon in the Scottish Highlands. These are places we probably would never have visited otherwise, and to be able to do them all in 7 days was a real treat.

I was going to title this section “Things I didn’t like,” but that would have been unfair, as there was nothing about this trip I actively disliked, but there were a few things I would change from a personal point of view.

I have a picture in my head now of the executive chef reaching for a cleaver, but hold on! The food aboard was excellent – well prepared, served with panache, plenty of it and using good ingredients. But it wasn’t to my taste – I love sumptuous buffets with mountains of sea food, and interesting delicate fish dishes. The food aboard Columbus is perfectly tuned to their market – traditional British style food like beef with Yorkshire puddings and stuffed chicken breast.

We did have a meal in the Indian restaurant which “pops-up” every few days and that was superb. We also signed up for a gourmet evening with wine pairing, but not enough other people did so, so the event didn’t run.

Don’t get me wrong, you will never go hungry on Columbus and everything you eat will be good quality, and the traditional British tea with scones was a winner!

I’d guess the average age of the passengers aboard would be in the mid 70’s, and that was to be expected on a trip that was themed “Antique’s roadshow.” It meant there were few people aboard we had much in common with – I can’t think of a single person we met who was still working full time, for example. Whilst we met many fascinating people and had some fabulous conversations with them, it was often a struggle to find common ground and go beyond the superficial “how many cruises have you done?” discussions.

The exception was a lovely couple from Norwich we shared most of our meals with, who were more our age, and I wondered if CMV’s system cleverly placed us together on a table, using age as the common denominator. If so, good planning!

There were two large groups aboard, one from Saga and one from Norway. This meant that parts of the ship we wanted to use (for example the observation lounge which we loved) were blocked off for those groups at certain points of the cruise. It wasn’t a big deal, as there were plenty of other options, but it was a little frustrating when we planned an hour’s book reading one day, and we wanted to watch the world go by, only to find the Norwegian group there having a lecture.

The Norwegian group also tended to stay together in each port, where their guide used a portable PA system to describe everything they could see, so we were quite focused on avoiding them! So, there you have it, the ups and downs of our first cruise. Overall, it was a good experience, and the best part was having our own, comfortable space with us for the whole week and the fact that our “hotel” also magically transported us to a new destination each night. It’s certainly given us the appetite to try more cruises.