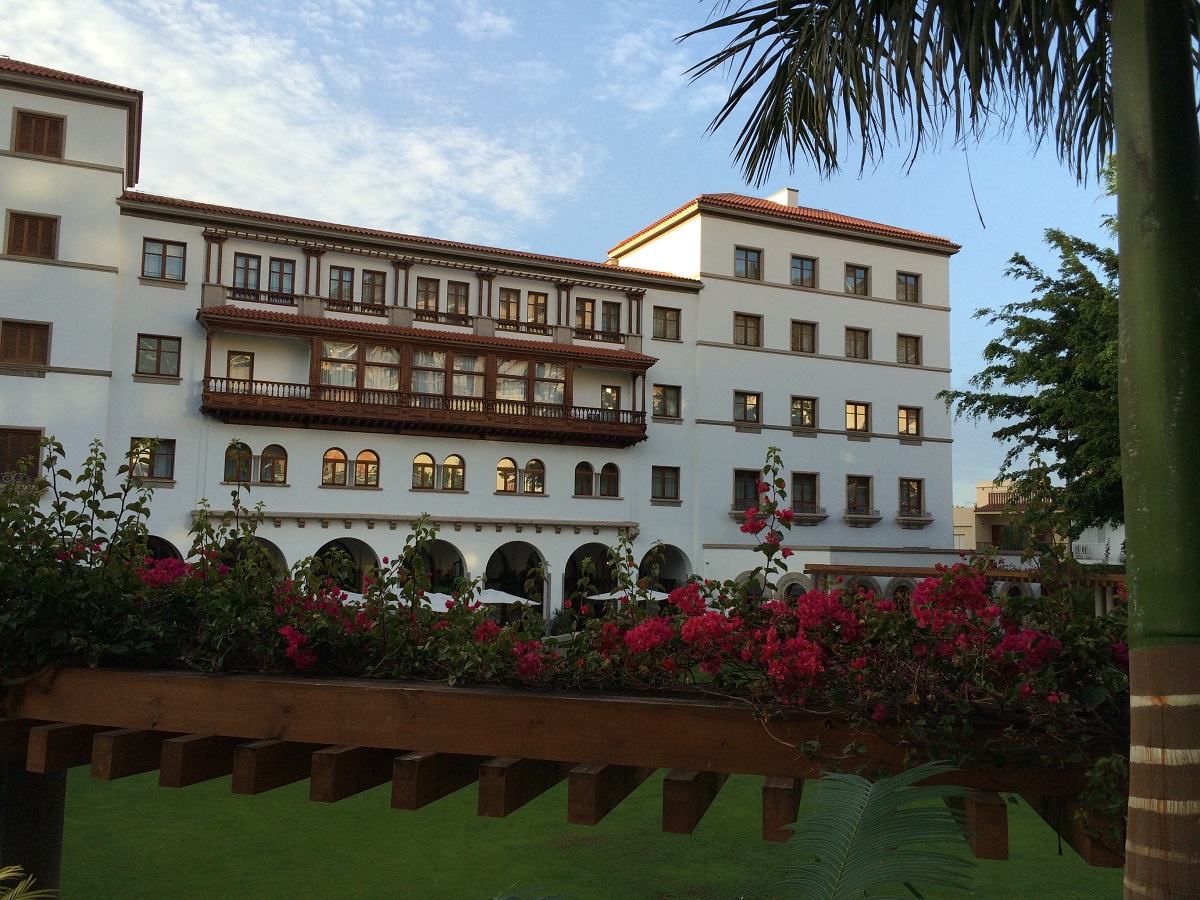 We flew into Tenerife North Airport from Lanzarote, and wanted a base in the capital for a short stay. We selected the 5 star Iberostar Grand Hotel Mencey because it’s probably the best known hotel on the island, having been there since the 1950’s and only recently taken over by the Iberostar group. The hotel is reasonably easy to find – it’s just off the Ramblas, which are a kind of central ring round in the city. The car park is just a short way uphill from the hotel entrance and there are marked spaces for hotel guests. I wasn’t impressed at having to pay €12 a day to park there – surely a 5 star hotel should have access to a free car park?

The building is lovely- very colonial in style as you can imagine from its age. The casino downstairs is heavily promoted outside, and we were given tickets for a free drink there when we checked in, but we didn’t try the tables. It’s a fair walk from the car park to reception, but you can park outside for a few moments to drop cases off. You do get to see the inner patio area while walking, and there are fabulous gardens and a large pool and bar there. The lobby is elegant, and the public areas feature some fabulous art depicting local dignitaries from down the years. We had a bit of a kerfuffle when we arrived – we knew we were early, so the plan was to drop the cases and get some lunch, but the receptionist insisted on checking to see if our room was ready, which meant a wait while he found out. In the event it wasn’t, so we did drop the cases.

After a terrific lunch at a local restaurant, which was a short walk through the park directly opposite, we returned to check in, and that took another 20 minutes. Only two desks were operating, and the people in front of us seemed to want to know everything about their stay before actually taking their keys and getting going! When we finally made it to the front of the desk, it was all quite painless, and we were given a welcome glass of Cava while the card was swiped and passports copied. We were upgraded to a garden view room, despite having booked a city view, and we were very happy about that – I suspect the city view rooms could be quite noisy. The room was good – two single beds, which were a little hard, pushed together. The room was very modern in style, with laminate flooring and bright walls and furnishings. It felt quite small, though. We had the usual disappointment at the lack of English language TV channels – basically BBC World service, CNN and Al Jazeera. We went for a workout at the gym, and it was excellent! Well equipped and with a very friendly manager, Guillermo, who is a three times Lanzarote Ironman finisher! They have all the machines you need, and the front is open so you get a cooling breeze there. We didn’t use the spa – the charge was a special offer of €15 each, but that seemed expensive when time only would have allowed us an hour in there. I much prefer hotels which include use of the spa, even if its effectively hidden in the room price.

Considering the city centre location, the gardens were lovely, and beautifully maintained. We enjoyed a pre dinner drink at the pool bar, but we had dinner away from the hotel, so we can’t comment on the evening meals there. We had read on Trip Advisor that the breakfasts were really special, so we were looking forward to it. Sadly, we were disappointed! The restaurant is very nice indeed, with plenty of tables both inside and outside, and the service is good, although being a buffet, the waiters don’t do more than bring the coffee or tea. There was nothing different from the usual offer of cold meats, cheeses, croissants and breads, and the hot section consisted of the usual slightly runny scrambled eggs and floppy bacon. Everything also tasted very under seasoned to me, and the coffee was diabolically stewed. Maybe we caught it on a bad day, but we really didn’t rate the breakfast. The best thing about The Grand Mencey is the location – it’s superb for exploring Santa Cruz, and it was great to cross the road into a fabulous park and quickly get anywhere in town. The room was perfectly acceptable, although it didn’t have any “wow” factor, and the service and breakfast can only be described as average.

Travel and the area

We flew into Tenerife North with Binter from Lanzarote. It’s about a 20 minute drive to the hotel. We loved Santa Cruz – it’s a fabulous city.

If you’d like to stay at The Iberostar Grand Hotel Mencey we’d be happy to arrange it for you, just contact us and we’ll get to work on getting you the best price for your dates.