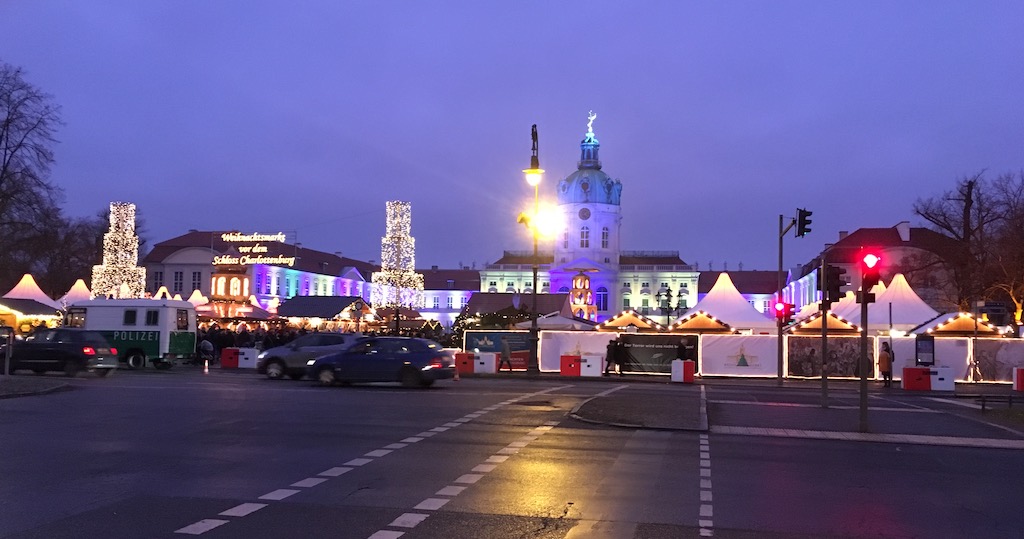 I’ve heard people talk about the Christmas markets in Germany for years. I thought they were huge markets where people bought Christmas trinkets and decorations, but I was completely wrong!

So for anyone afflicted with a similar misconception, here’s what they are all about. They spring up in different neighbourhoods in late November or early December, and generally last until Christmas Eve or Christmas day.

They vary, but the core of each is the same –  stalls selling beer, Gluhwein and punch (more on that later) others selling food, and finally ones that sell clothing or arts and crafts. The drink stalls at the Christmas markets range from conventional stalls to very large wooden sheds, which are basically like pubs. But mostly they are open stalls, and some have table centre fires blazing or outdoor heaters. The vast majority of people drink Gluhwein, which is the perfect drink for a cold winters night in the outdoors. Some drink beers, and a few drink the Eierlikör punsch, which is like a hot Egg Nog, and which packs quite an alcoholic kick – I loved it!

You’ll be surprised at how expensive your first round of drinks is, but don’t worry, there’s a glass deposit system – usually €2.50 or €4 a glass. You can take them back when finished and get your money back, or you can take the glass away as a memento – they’re generally engraved with the market name and date.

At the markets that are open on Christmas day, you’ll find plenty of stalls selling Champagne.

There’s a wide, but pretty standard offering at the markets. As you’d expect, you’ll find a lot of curry wurst and other types of sausages. You’ll also see mushrooms everywhere, cooked in huge frying pans in butter and garlic, pizzas, a kind of fried dough with toppings and twirly cake sticks dipped in sugar and cinnamon. There are pretzel and bread stalls, gingerbread and sweet stalls, stalls selling strudel, and in some of the more upmarket markets (!) full blown pop up restaurants serving Schintzels and knuckle of pork.

You won’t go hungry at the markets – in fact you could eat solely at them for a week and not repeat a meal. Prices are very reasonable, but the downside is places to sit and eat are limited, so you’ll often end up scoffing on the move.

And on Christmas day markets, you’ll find turkey roasts – we enjoyed a turkey roll, with all the trimmings including cranberry sauce.

It’s hard to be specific here, as we visited four markets and they vary quite a bit. All had stalls selling hats, gloves and scarves, some had huge craft sections where you could buy everything from stunning wood carvings to hand made leather goods, while others had blown glass, and yes, a few were selling Christmas decorations.

Many markets have some kind of entertainment on – it could be music from a PA playing cheesy Christmas songs, or a live entertainer, and several have something for the kids, like a merry go round.

But actually, it isn’t about the stalls selling goods…..

It took me until my second visit to realise the Christmas markets aren’t about buying “stuff.” They are about people getting together before Christmas.

Basically every market consists of a series of interconnected “pubs” in the open air. People stop in on their way home from work, or to take a break from their Christmas shopping, and wander from bar to bar, chatting to friends and family, occasionally buying a bite to eat. And as it gets closer to Christmas, the excitement builds and the chatter becomes more animated, creating a wonderful and very warm atmosphere to join in with.

We loved being a part of it, and you will too!

You can read the full article about our trip to Berlin for the Christmas markets here: A week in Berlin.

If you’d like to visit the Christmas markets in Germany, get in touch with us. We can arrange anything from a few days to a week or more.