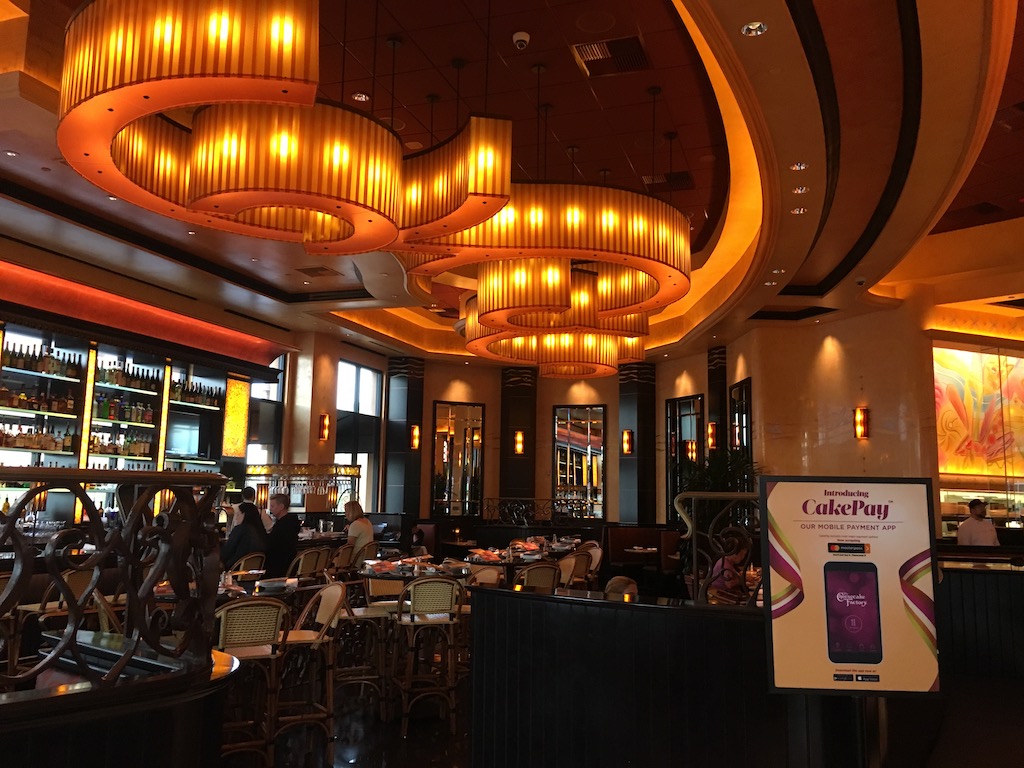 There are four Cheesecake Factory restaurants in Las Vegas, we popped in to the one at the Las Vegas North Premium Outlets for a coffee break whilst shopping and ended up having lunch instead, as the dishes looked fantastic. If you don’t know the Cheesecake Factory brand, their menu has a whopping 250 dishes, which are made fresh daily. I counted 37 different cheesecakes on the menu, it’s a staggering choice and actually makes it very hard to pick one. It was during our study of the detailed menu that we noticed the dishes passing by with waiters, the portions were huge and they all looked delicious. Having decided to lunch rather than just eat cake, I asked the waitress for advice as I really couldn’t decide which dish to try. I was advised to order a lunch sized portion of Sheila’s Chicken and Avocado Salad as it was one of the best sellers and also her favourite dish. As it was only salad, I thought I could fit in a piece of cake and ordered the Salted Caramel Cheesecake to follow. The “lunch sized” salad portion was still huge! I adored this combination of grilled chicken, avocado, mixed green leaves, carrots and cashew nuts, which had been tossed in a citrus, honey and peanut vinaigrette and topped with crispy pieces of tortilla. It was superb, the best salad ever and one I’m going to try and recreate at home. Now for dessert, which was the reason we popped in for a coffee here, to be honest I was disappointed. My cheesecake had a topping of salted caramel, caramel mousse and blonde brownie base. The flavour combination worked, but the base wasn’t crunchy, it was spongy, more like a trifle than a biscuit. I was also disappointed with the outlet shopping, whilst there was a good selection of famous and high quality brands, none of them were offering any decent discount offers during our visit. I had been led to believe from a number of different sources, that we could save hundreds to thousands of pounds compared to the UK. We didn’t buy a thing! The prices were comparable to home, and we ended up travelling back with our half empty suitcases. Maybe it was the timing of our visit, it was Black Friday the following week, I came to the conclusion that they were saving the mega deals for that event.

It was time to head down to the airport, we were going to weigh in with a few more pounds than planned for our helicopter flight.