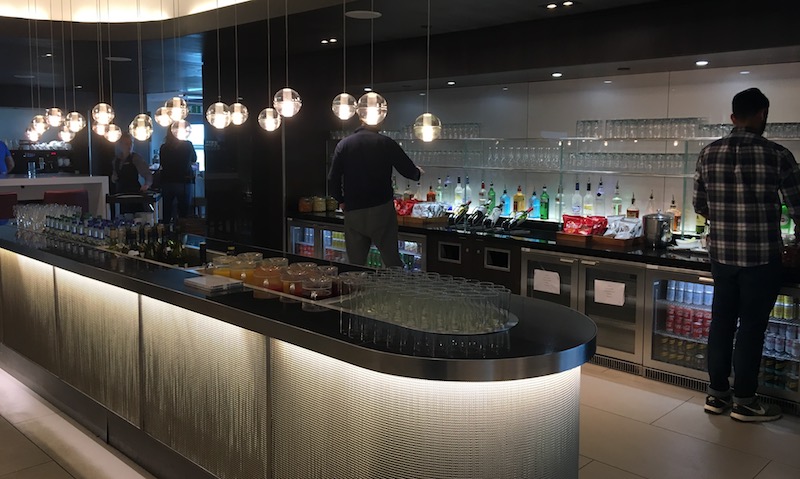 Is it worth paying the extra for Club Europe? A lot depends on the aircraft – we flew from London to Barcelona in 2017, and the aircraft was a Boeing 777, so we enjoyed the full business class experience, even down to fold flat beds. But on most European routes BA flies Airbus A320’s and it isn’t that exciting. Read on for more….

We flew business return from Lanzarote to London Gatwick. We elected for the offered upgrade to Club Europe, having already booked economy tickets. The deal was offered in the BA app, and persuaded us to go for it. As we needed luggage for a cruise, the increased luggage allowance was tempting.

With an upgrade to Club Europe you get:

Both at Lanzarote and London, there’s a dedicated check in for Club Europe. In Lanzarote, we were able to go straight to the desk and avoid the much longer queue for economy passengers.

In London, the Club Europe check-in area is sumptuous and curtained off from the main airport. It even has couches and carpets and feels very special. Again, we were straight through, with no delays.

There isn’t a fast track option in Lanzarote, so we went through the normal channel.

London’s fast track is fabulous! You turn off into a separate area, and basically there is no waiting around at all, and none of those interminable winding queues.

The lounge in Lanzarote is not part of BA’s Club Europe programme, although that wasn’t clear on our tickets. In the event, we have Priority Pass anyway, so we were able to use Lanzarote’s lounge, which is basic, but does the job of getting you away from the very busy main airport areas. BA either need to do a deal with Lanzarote, or make their documentation much clearer when upgrading.
(Update: The Lanzarote lounge has been included on subsequent flights)

The lounge at Gatwick, however, was a different story. The Club Class lounge at Gatwick is brand new and is simply superb. On two levels, with views across the apron, there are loads of different seating areas – comfy couches, desks to work, or tables to enjoy food. There are power sockets everywhere and the Wifi is super fast.

There’s a huge range of drinks to choose from, including Champagne and premium spirits, and the food was top quality and regularly replaced. There was hot food on for lunch  when we arrived, and within an hour or so, that had been changed to scones and cakes to reflect that it was tea time. There was always an abundance of snacks like crisps, peanuts and olives available.

This is where it all starts to go a little wrong. What BA have done is to select a section at the front of the aircraft and call it Club Europe. The seats are no different to the ones everyone else is sitting on – the only difference is that they fit a cover over the middle seat in each row, so effectively the row becomes a two seater. It does mean you get plenty of elbow and side room and a useful centre table for bags, phones and things. But anyone hoping for more legroom will be disappointed. There isn’t any.

Once the aircraft is in the air, a curtain is drawn between the two cabin sections, and the crew get to work. We had two crew in our small section of about 20 seats, so the service was excellent. We didn’t have to wait long before we were given a hot towel, and then a pre meal drink with our meal menu. There’s a choice of main course, with standard starters and desserts. We were disappointed on the outward leg, when they ran out of our choice for the main, so we had to make do with something different. On the return, we made sure we chose seats nearer the front, so that wouldn’t happen.

The meals were accompanied by a choice of excellent wines, and the crew regularly came round offering more drinks.

There are no screens and no in-flight entertainment available.

The food is really very good – full of flavour and well presented. It’s nice to have metal cutlery, real glasses and linen napkins. It sounds old school, but it makes you feel good.

The service, the food and and the whole “special” feeling from check in to the flight are excellent, and I really enjoyed those aspects. BA’s club lounge at Gatwick is genuinely world class, and that alone makes me want to fly Club Europe again, but the let down is the aircraft seating. Lanzarote is a 4 hour flight, so comfort is important, and if only the seats in Club Europe offered more legroom, I think it would be a much more attractive option.

The lack of fast track and lounge access in Lanzarote is also an issue. The first leg of our journey left me wondering what I’d paid for, whereas the second leg felt worth every penny.

Would I do it again? It depends on the cost. At the normal Club Europe prices, I don’t think it’s worth it, but when an upgrade offer comes along, I’d be very tempted, especially as the trip is worth 80 tier points each on our Executive Club Cards and enough Avios to give us every fifth flight free.