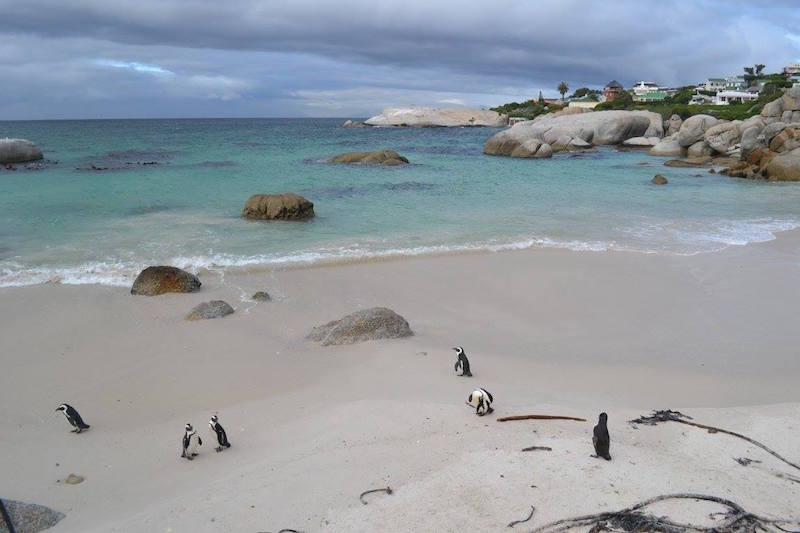 The African penguins that can be found on Boulders Beach near Simon’s Town, are a popular attraction for visitors to South Africa. The Boulders Penguin Colony was founded when a pair of African penguins were spotted on Boulders Beach in 1983, today there are around 1000 breeding pairs in residence at this sanctuary. These penguins were commonly referred to as “jackass penguins” due to the braying noise they make. The African Penguin has been registered as an endangered species since 2010, as they have lost 80% of their breed over 50 years. Boulders Penguin Colony is part of the Table Mountain National Park and there are rangers on patrol to ensure the safety of the penguins and public. This is definitely a place to stop on your way to or from Cape Point. There are three boardwalks and beaches along the Boulders coastline where penguins can be spotted, as well as the penguin viewing area. It is possible to get on to a beach where you can swim with the penguins, although you are warned not to touch or feed them, they might look cute, but they have a nasty bite. We paid to visit the visitors centre at Boulders Beach, which gave us access to a great viewing platform on the beach with lots of penguins. The penguins are all around the boardwalks pharmacy online too, we saw lots of nests in public places, there’s even a sign to check under your car before driving off! We stopped at the first kiosk from the car park to pay our fee, but was told to go around the corner to the other. What we didn’t realise until afterwards, was that we could have returned back to the first place and gone down onto the beach, where you can get even closer to the penguins. We visited in June, there were lots of big fat baby penguins visible at that time of year. Apparently Foxy Beach is the place to head for if you don’t want to pay the R60 entrance fee. Windmill Beach is also recommended as a good place for children to picnic and swim, which is accessed from Burghers Walk, on the other side of the car park to the visitors centre.

I was so pleased that we found time to visit the penguins during our short trip to South Africa, they are cute and their antics make me laugh. I could have easily spent a day exploring this section of the coast the huge smooth granite boulders and pale sand beaches are stunning.

Our album of photos can be viewed on our Facebook page Boulders Beach Penguin Sanctuary.