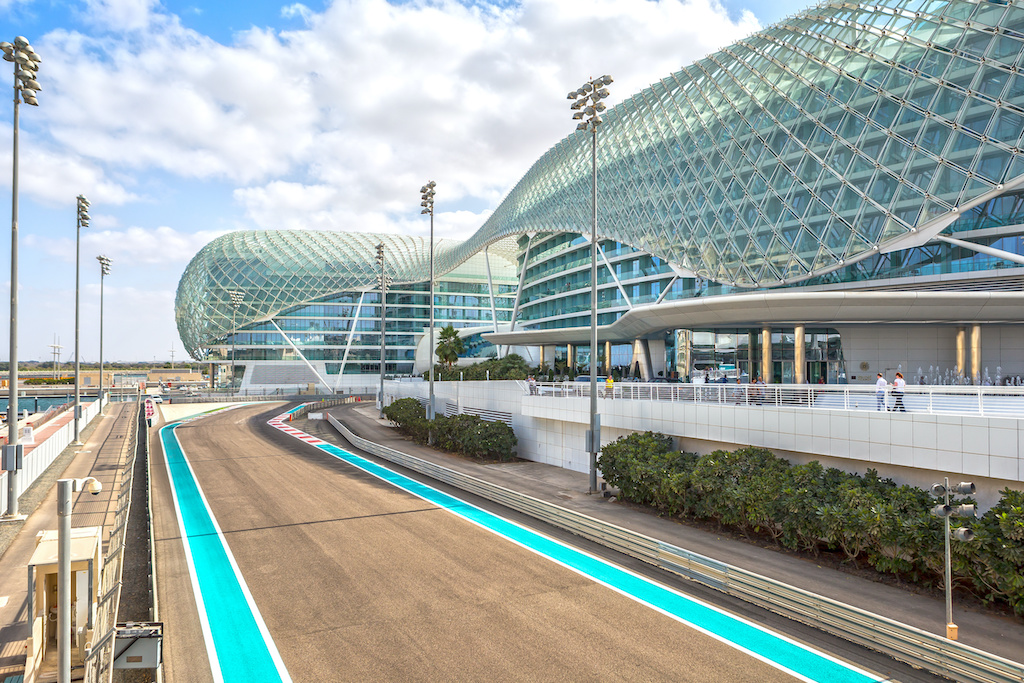 Abu Dhabi is the second city of the United Arab Emirates, and the most populous. The city is on an island in the Persian Gulf. It offers a spectacular city scape and guaranteed hot and sunny weather.

The city has about 1.5 million inhabitants and is a bustling, modern metropolis with a real international flavour.

The inaugural race, in 2009 was F1’s first Day / Night race, starting at 5PM local. It remains the only race which offers both daylight and night time running.

The race is traditionally the last of the season.

The Yas Marina circuit is in Abu Dhabi’s incredible marina area of the same name. The circuit is twisty, with 21 turns, but also features a single, long straight and another gently curving straight. Although purpose designed, and quite wide, overtaking has been an issue at the Abu Dhabi Grand Prix.

One unique feature is the pit exit, which uses a tunnel to go under the track, allowing drivers to rejoin the circuit.

There is also a theme park, hotels, a water park and beaches all within the circuit area. The end of season party is generally excellent, with top acts and many drivers and teams staying on for testing, which follows the Grand Prix.

The championship for both teams and drivers has normally been won some time before the Abu Dhabi Grand Prix, so everyone tends to be quite relaxed and there is an end of term feeling at the race.

Nevertheless, expect some tough competition further down the order as teams try hard to consolidate points for the end of season payout.

Lewis Hamilton is the King of the Abu Dhabi Grand Prix and has won the event 5 times.

Before 2021 there hadn’t been many vintage races at Abu Dhabi, but the atmosphere and after event party are well worth going for. And of course it was the scene of F1’s most notorious Grand Prix ever, when Michael Masi stole a certain 8th world championship from Lewis Hamilton.

It’s also a fascinating part of the world to visit, and you’re guaranteed hot sunshine, even in December.

There’s not a huge capacity at the Abu Dhabi Grand Prix – a total of 41,000 seats. There are five grandstands, all served with huge television screens.

The main grandstand, as you’d expect, is on the start / finish straight, but we favour the North grandstand, which allows a long sweep of the cars in the tight section at the end of the main straight.

Both the west and south grandstands are on interesting part of the circuit too, with the marina grandstand being on a very fast section, so great for action shots, but you’ll have to be quick!

Other options available so do get in touch for a personal quote. For example, we can tailor a package to fly in overnight on the 16th, including 3 day F1 tickets to access the pit lane walk on Thursday and access to all 4 evening concerts.