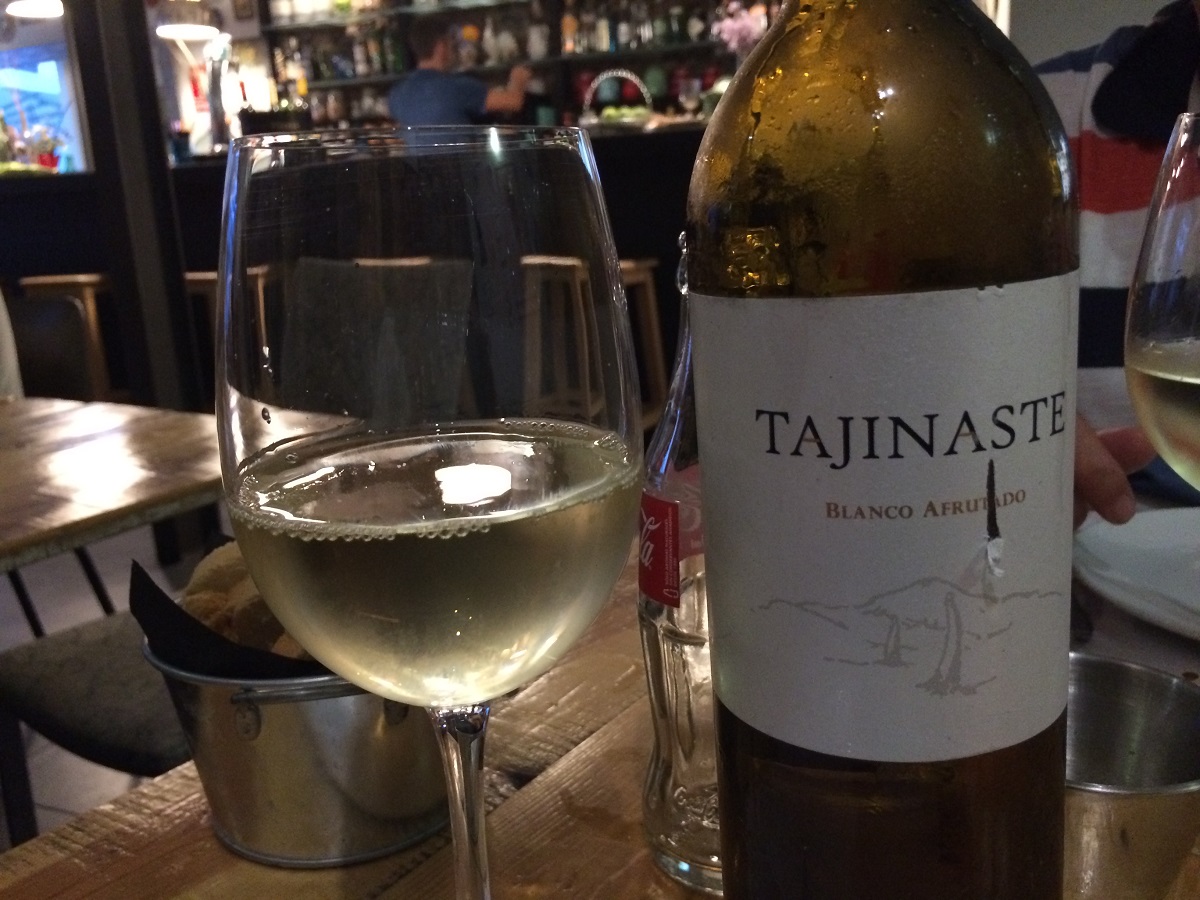 Having asked for wine recommendations before setting off to Tenerife, we were pleased to find 4 of them to taste during our stay. Our next find was actually a really thoughtful gift from Linda Wainwright, an online friend who has lived in Tenerife for 28 years, who we met in El Médano. We enjoyed this bottle of Flor de Chasna Blanco Seco with a take away curry from Bombay Babu one evening, which we ate on the terrace of our frontline apartment in Callao Salvaje, whilst watching an incredible electrical storm out at sea.

Flor de Chasna is produced by a co-operative society called Cumbres de Abona which was founded in 1989 to combat the deterioration of vineyards in the South of the island. The co-operative has a modern production facility situated between Teguedite and Arico and is an impressive collaboration including some 720 wine growers. The Flor de Chasna Blanco Seco is made with 100% Listán blanco which is cultivated in the higher areas of the district. Denominación de Origen Abona We also had an opportunity to sample another Flor de Chasna, buy cheap propecia online this time the Blanco Afrutado at Bodeguita Algarrobo in Puerto del la Cruz. We also ordered a tapas of Queso Manchego which in our opinion, paired beautifully with this semi sweet wine made from 100% Listán Blanco. I had spotted our final wine in one of the tourist supermarkets and hesitated at the price which was €14.95, I was therefore delighted to find the Brumas de Ayosa Blanco Seco on the wine list in The Oriental restaurant at Hotel Botanico & Spa, priced at €20. Bodega Comarcal Valle de Güímar is a collaboration of 152 families dedicated to winemaking and situated on the road to Teide close to Arafo. The vines are planted in 1500 hectares within the municipalities of Candelaria, Arafo and Güimar, at altitudes ranging from 200 to 1,500 metres. This bodega pioneered the manufacture of sparkling wines in the Canary Islands. The Brumas de Ayosa Blanco Seco is made from 100% Listán Blanco. Denominación de Origen Valle de Güímar.

It was actually quite difficult to taste local wine in Tenerife, the hotels, bars and restaurants were often caught out by our request, they could usually rustle up an odd bottle but definitely not a wine selection. We normally drink dry white wine and were pleasantly surprised by the afrutado (fruity) white wines of Tenerife.