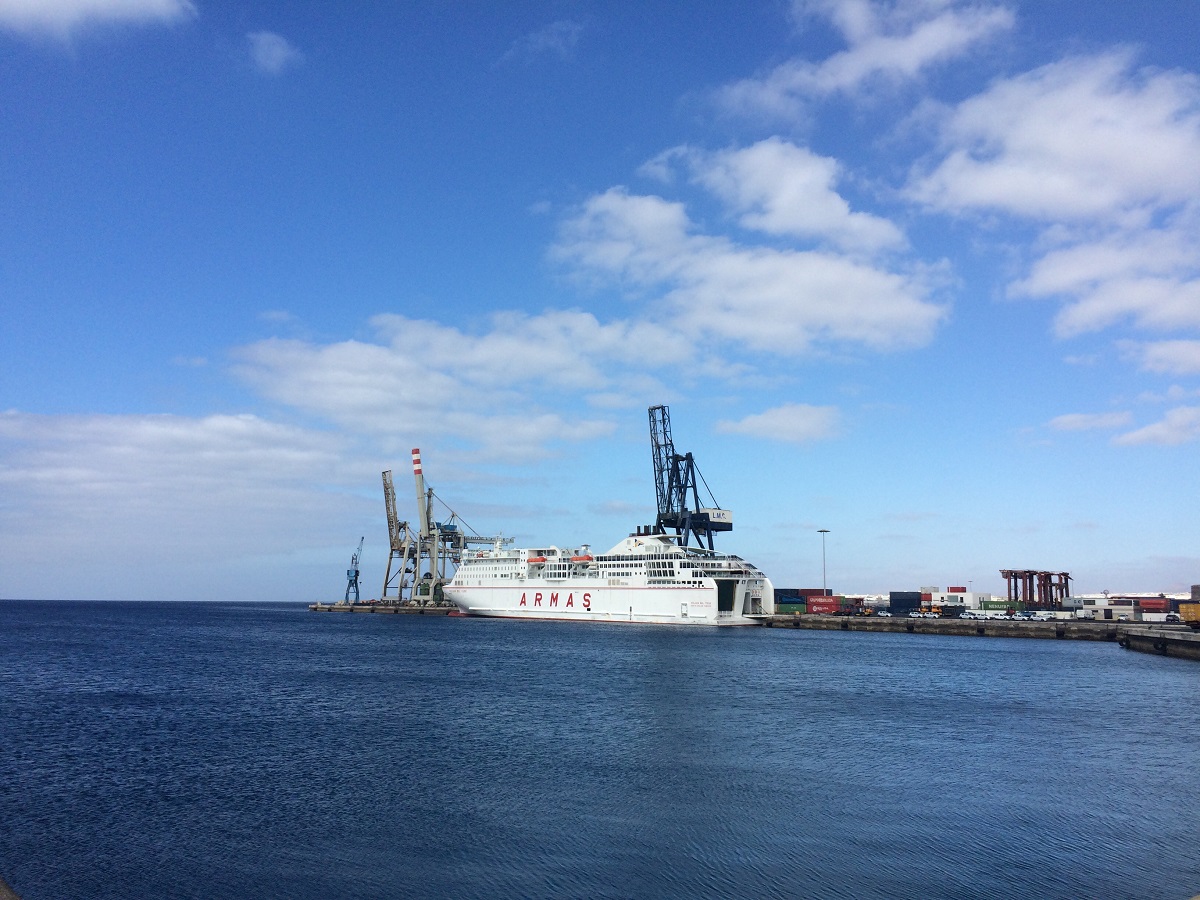 We were planning a trip to Gran Canaria from our home in Lanzarote, and our first thought was to fly there and hire a car. But I decided to look at the comparative costs of using the ferry service, and I was surprised to find that they were broadly similar, so we elected for the ferry, on the grounds that we could take our own, convertible, car and enjoy cruising around Gran Canaria.

It turned out to be a classic journey of two halves!

The outward leg was going to be a daytime one, and the return overnight. Sadly, there were no cabins available for the return trip, so we selected “Pullman seats.” We turned up at Arrecife docks an hour before our 1100 AM departure and were directed aboard the ship. I was surprised at how modern and comfortable the ship was, and gobsmacked to find that it had a swimming pool! There were not many people or vehicles aboard, and only one small bar was open – the duty free shop didn’t open at all, so there wasn’t much to do, and we’d left our bathers in the car, so we couldn’t even have a swim. We decided to explore the ship, to learn what we needed for our return journey, which we knew was going to be much busier.

We found the Pullman seating areas, and they were furnished with very comfortable leather seats, which reclined, bringing up a foot rest. We felt we could sleep alright in those. We had some lunch when the self service restaurant opened and it was dire! The choice was Lasagne, unidentified meat in a sauce or fish fillets in Mojo sauce. I went for the lasagne, Julie for the fish and neither of us enjoyed it! It didn’t even have the redeeming value of being cheap, so we promised ourselves we’d bring our own food next time.

The journey passed slowly, and once we’d gone down the length of Fuerteventura, we didn’t see land again until we sighted Las Palmas in the distance several hours later. The run into port seemed to take ages, and we actually docked almost an hour late, so although the crossing had been smooth, something had been amiss somewhere. There were no announcements to explain our lateness.

But we were there, and you can read about our stay here: Playa del Inglés and Bohemia Suites & Spa.

Return Journey
We spent the evening having dinner in Las Palmas and headed for the docks there with an hour to spare for our 2350 departure. The docks are an absolute nightmare! The signage is useless and we spent some time going to all the wrong places before we spotted a Naviera Armas ship with cars queuing beside it. We rocked up and joined the queue, and sat there waiting, but then we spotted another Armas ferry and checked with another driver, to find we were in the wrong place. There wasn’t a clue anywhere as to which ferry was going where!

We eventually got into the correct vehicle queue, at which point we realised we were travelling on a smaller and completely different ferry! All our planning for the return trip had gone to pieces, so we decided to rush aboard and investigate our Pullman seats. On the smaller vessel, there were four sections of seats, three had loud TV’s playing in them, but we eventually found a fourth where the sound was turned down. We were dismayed to find that the seats on this vessel didn’t recline at all! I hardly slept, and spent most of the night wandering around the ferry, meeting other lost souls doing the same thing, to try to keep my legs moving. The bar and restaurant didn’t open at all, so the only option was a vending machine that served coffee and chocolate.

It’s really quite bizarre that we had a big, comfortable ferry with hardly anyone on it for the daytime trip, and a small cramped one, packed to the gunwales for the overnight leg. It’s also atrocious that nothing was open – at one stage I had to find a crew member to open the bar so I could buy a bottle of water!

We did really like the idea of having our own car with us, so we may use the service again. BUT, we’ll always book a private cabin for an overnight leg, and we’ll be sure to take plenty of food and drink from the car into the ship, so we’re completely self sufficient. Oh, and our swimming trunks!