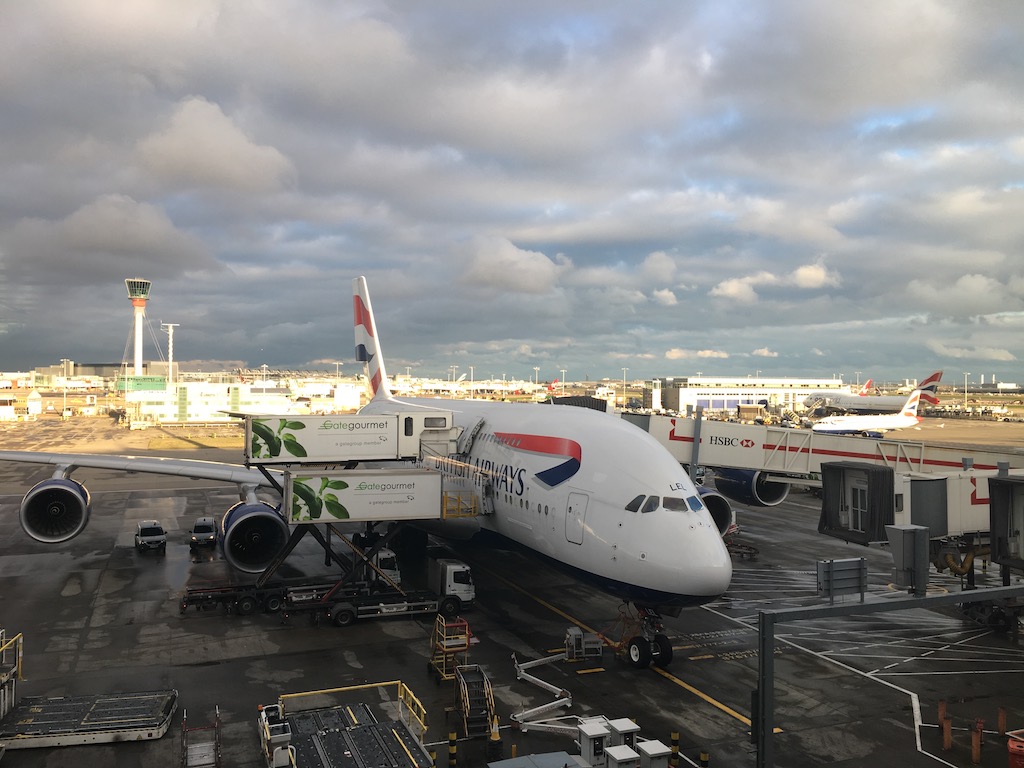 Our flights from Lanzarote to Madrid with Ryanair and Madrid to London with Iberia were uneventful, although the Iberia A320 felt too cramped for comfort after the Boeing 737-800 with Ryanair. I’m doubtful we’ll use this airline as a codeshare with British Airways from the Canaries in the future. The Iberia seat pitch in economy is 28 compared to the 30 in Ryanair, which left us short on legroom, although both have the same seat width of 17.

Our flight was on one ticket from Madrid to Hong Kong, so we didn’t have to worry about collecting our luggage and checking in again at London Heathrow, in fact we were travelling in and out of the same terminal, which made our transit easy, other than a delay through security. We enjoyed lunch at Gordon Ramsey’s Plane Food restaurant overlooking the apron. They offer an express menu for anyone short on time, and even a picnic menu to carry onboard your flight. The food and service was excellent, there were some grumbles from other tables about the cover charge £1.50 per diner and 12% service charge which is automatically added to the bill. The flight boarding wasn’t as slick as some of the other long haul airlines we’ve travelled, with priority given to First, Club World and Executive Club members before a general boarding was announced. The queues moved pretty quickly and before long we arrived at our seats. We had opted for the back row upstairs 83 A&B. Mike’s foot room on the window seat was pretty restricted with two metal boxes at the base of the seat in front. Worryingly we couldn’t fit our standard hand luggage cases in the overhead lockers, they weren’t deep enough, luckily we were one of the first passengers to arrive and after searching the section, we found two single lockers that could accommodate our cases. Our seats were comfortable, they reclined without restriction and there was a useful luggage compartment built in under the window which was handy for storing our personal items. Personally I liked this small area of just 4 rows of seats, the toilets were handy and the proximity of the galley didn’t disturb us. We departed at 18:25 and our arrival time was 14:20 the following day, 8 hours of this is the time difference between UK and Hong Kong, so our flight duration was 12 hours. The majority of the passengers slept after the evening meal, waking in time for breakfast service before landing. I’m not great at sleeping whilst travelling and tend to dose between films, the first 9 hours passed quickly, but I suffered jumpy legs towards the end of the flight.

There’s quite a walk through T1 on arrival, and a train before you arrive at immigration. Medical staff were checking passengers with infrared cameras for signs of a temperature along the way, keen to catch anyone with the early signs of Avian Flu according to the noticeboards. Immigration was easy and moved quickly, a quick glance at our passports, boarding cards and immigration form and we were on our way. We found the hotel complimentary transfers area situated in Arrivals Hall B and after a 30 minute wait we were on the shuttle bus and heading towards Kowloon. We were in luck and the first stop off the shuttle bus, the concierge organised our cases up to our room, whilst we checked in. Our double room superior city view had been upgraded to a side sea view of the harbour, room 3203 was almost on the top floor and had a fabulous view over to the old Kai Tak runway which is now an industrial park. After a quick shower and freshen up, we headed out onto King’s Road to explore our local area on foot. The local “ding ding” old fashioned double decker trams run right past our hotel, I can’t wait to have a ride on one of these. We tried to purchase a sim data card for our mifi but was unable to find an outlet for pay as you go (only contract), and although the 7 Eleven shops could top up the Octopus cards, the three we tried didn’t have any in stock to loan us. At this point it was 7pm in the evening, we were starving so decided to get something to eat and have an early night. We stumbled upon The Bean Bar & Grill in a pedestrian side street and ordered two cold beers to enjoy whilst we selected our menu choices. This place has coloured paper slips with menu options divided into seafood, meaty, veggies and bar snacks, you simply tick which ones you want and pass them in to the grill. It was time for bed, we had a 9am appointment in the morning, and both of us needed a good night’s sleep, to get our body clocks in sync with Hong Kong. Our room had been turned down, with a hand wrapped Ferrero Rocher waiting on our pillows. It was wonderful to climb into bed with the harbour view for company and drift into oblivion.