A Visit To Aberdeen Harbour In Hong Kong 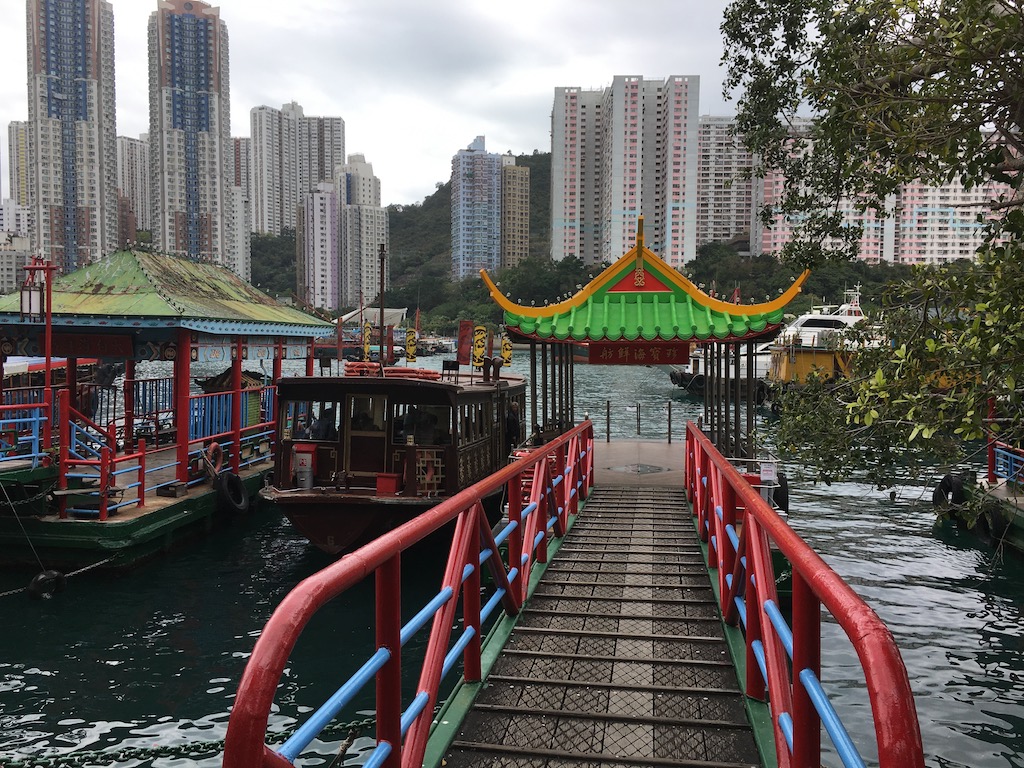 We were unsure if to visit Aberdeen during our time in Hong Kong, Mike remembered going to the Jumbo floating restaurant for lunch as a child with his parents at the weekend. In the end we went on our last day, catching the number 70 bus from Central. We walked the length of the harbour along the promenade on arrival, the sampan tour guides were quite persistent in their efforts to negotiate a harbour tour.

It was an interesting stroll along the waterfront, there’s information boards at regular intervals with the history of the harbour and fishing industry. This village was actually known as Hong Kong since the Ming Dynasty. It was when the foreigners arrived that they mistakenly thought the whole island was called Hong Kong, so they renamed the harbour village as Aberdeen due to it’s likeness with the namesake in Scotland. There were lots of locals cleaning & selling their freshly caught fish, we spotted some drying by the Mahjong hall. The floating restaurants of Tai Pak, Sea Palace and Jumbo can be seen in the distance from the end of the promenade. We were in two minds if to take the free Jumbo ferry service, to see these up close for ourselves, however as the original Jumbo restaurant had been burnt down, and the reviews that these are now simply a tourist attraction serving average food, we decided not to have lunch there. We jumped aboard the ferry service to cross the harbour to the island of Ap Lei Chau, as we’d heard about a designer outlet shopping centre, where famous brands could be bought at big discounts. The ferry boat doesn’t actually dock, it just noses in close enough to step aboard before turning around. Even here we could use our Octopus cards to pay the small fee of 2.2 HK$. We took the MTR at Lei Tung (which is a great alternative way of visiting Aberdeen) for one stop to the end of the line at South Horizons, and walked to Horizon Plaza. This has to be the most bizarre shopping centre I’ve visited! The entrance is like an office block reception, with a furniture shop on the ground floor and lifts. We started at the top floor (28) and started to work our way down. The lifts run odd or even floors so we took the stairs, there’s 1 to 4 shops situated on each floor of the building. The fashion stores such as Georgio Armani, Hugo Boss, Diesel, Ralph Lauren were offering discounted clothing from 40% to 70% off the original price but we felt they were still expensive, more so that the designer bargains to be found in outlet shopping centres in the UK. There were some unusual shops and local designers too, if you’re looking for something different. Empty handed, we jumped back on the MTR South Island Line and headed for Kowloon instead of crossing over to Aberdeen and catching the bus back to Central. The train was animal themed which I presumed was in reference to Ocean Park, which is accessible from the South Island Line.