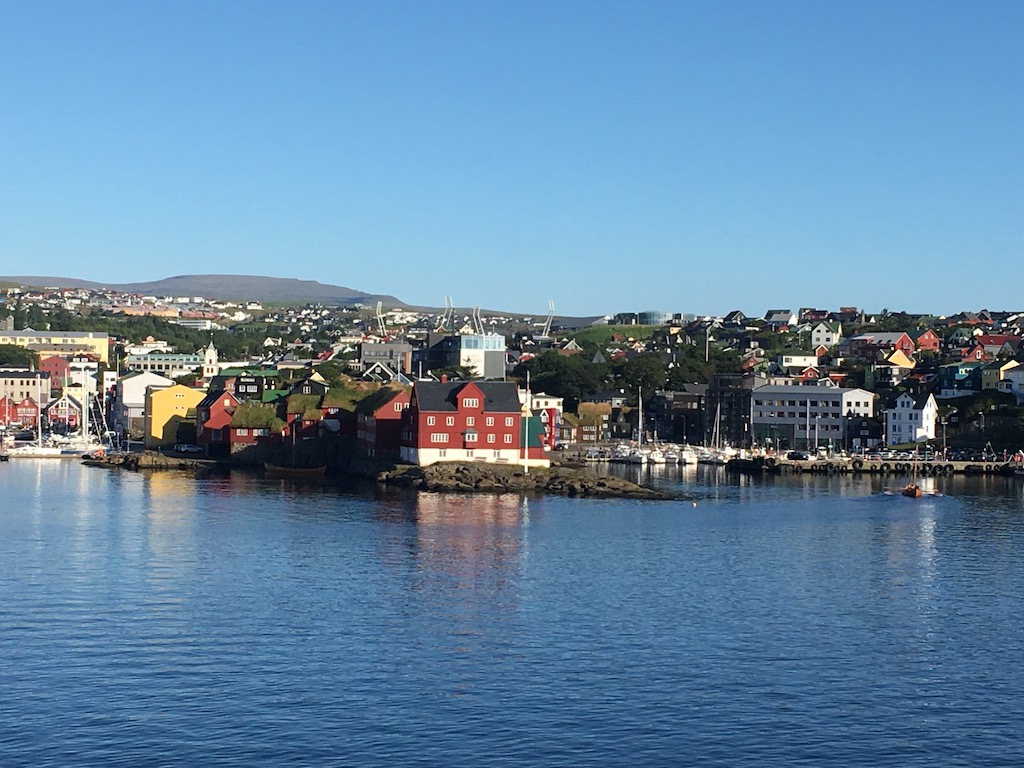 Our second port of call was Tórshavn in the Faroe Islands, on day 4 of our Scottish Highlights & Faroes Cruise with Cruise Maritime Voyages.

Tórshavn is the capital city of the 18 islands that make up the Faroes, it has a population of approximately 20,000 residents and is situated on the Southern end of Streymoy island. We were docked at Molin by the container port and the Port Authorities had provided a 2 minute shuttle bus from the ship to the information centre in the harbour. I really enjoyed exploring the tiny cobbled lanes and old turf roofed buildings in Tinganes, which is the oldest part of the capital and where the Faroese parliament was established. It was quite disappointing to find that Katrina Christiansen was closed for lunch on the day we visited, I had been looking forward to enjoying her tapas inspired food with Faroese influences. The Barbara Fish House looked and smelt fantastic too, with fish drying outside and the aroma smoked fish wafting, but that was only open in the evening as was the fermented restaurant Raest. We decided to stretch our legs and walk up the coast road Yviri við Strond which offered some lovely views across the water. We passed a campsite right on the coast, an interesting looking footpath to a stream with small waterfalls and covered about 8km with a circular walk, coming back into town past the sports stadium and SMS shopping centre, which we walked through for a comfort break.

I have some sympathy with restaurant owners deciding not to open in the day when the cruise ships are in. For us foodies it’s a major disappointment not to be able to try the best of the local gastronomy, but we are starting to understand that in general cruise visitors aren’t looking to dine out when in port.

The buses are free of charge in Tórshavn, it’s predominantly a service for the residents to get to and from work, they come in handy for tourists to hop on and off too! We ended up eating Sushi at Etika for lunch which was situated in a modern building close to the harbour. Their menu was loaded onto an iPad, we scrolled through so many options, and settled on a selection of salmon, halibut and shrimp nigiri plus grilled lamb and beef sticks. The Faroe Islands had a booze ban in place until 1992, some bars and restaurants still only have a half licence to sell beer and wine on their premises, and you can’t buy alcohol in standard shops and supermarkets. If you would like to buy alcohol you need to visit the specialist shop of Rúsdrekkasøla Landsins, there is one in Tórshavn situated on Hoyvíksvegur 67, Hoyvíksvegur, Tórshavn 100 and open Monday to Friday 10:00 – 17:30 & Saturday 10:00 – 14:00.

We found a couple of Okkara beers listed on the menu at Etika, there was no description of what they were, just the name so I tried one called Rinkusteinur. Okkara is a craft brewery situated in Velbastaður, which is directly across the island from Tórshavn, they started brewing in July 2010. Rinkusteinur is an amber ale, ABV 5.8% and I enjoyed the malty taste, apparently it’s brewed with Faroese lava rocks which gives it the caramel notes. We still had some time left before we were due back on board, so we went to explore the Fort of Tórshavn, Havnar Skansi which was built in 1580 to protect the town from pirates. It was also used by the British forces as their Faroe Islands headquarters in the Second World War.

We had wanted to try the local delicacy of fermented lamb, Skerpikjøt whilst visiting, this is a leg of lamb that has been hung in a shed to dry for 5-9 months. We did visit a supermarket but didn’t find any packets of the meat or hanging shanks during our visit.

We’ve published our photos in the album Tórshavn, Faroe Islands on our Facebook page.