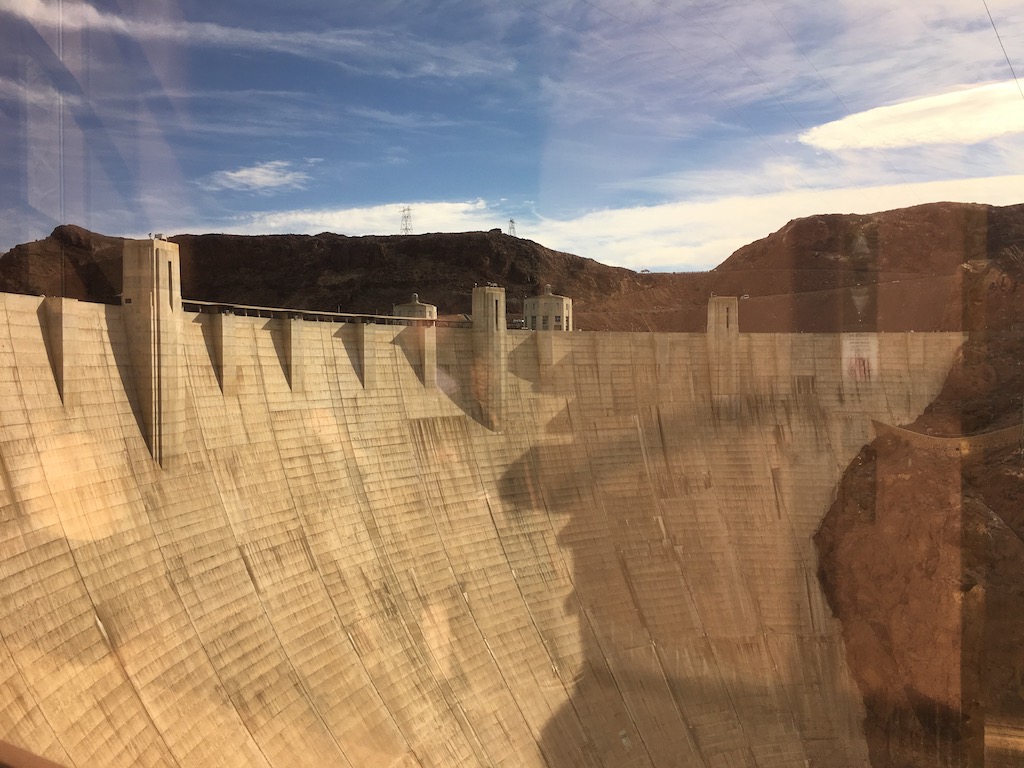 We visited The Hoover Dam as part of our trip to Las Vegas. We hired a car and drove to the dam, which is about a 40 minute drive. The dam spans the states of Nevada and Arizona, and crosses two time zones, which confused us as we headed afterwards into Arizona! It was built in the 1930’s during the great depression and had three key objectives:

1/ To provide water for irrigation to the states down river.

2/ To provide hydro electric power for the towns of Boulder and Las Vegas.

3/ To prevent flooding of the lower parts of the river by controlling the water flow. The construction has succeeded beyond all expectations – 80% of Americas crops are now grown with water from the dam, the generators have been running constantly since the 1940’s and provide huge amounts of power, and the river has never flooded. We did the full tour, with a group of about 20 people, accompanies by a guide who was both knowledgable and amusing. The tour takes you deep into the dam, down to the massive electricity generators, and up through the dam itself, from the thickest part to the very top. Our guide http://buyonlinegenericmeds.com/products/strattera explained it all in fascinating detail – how it was constructed, how and where the workers lived, as well as how the complex inner workings of the dam can control the vast amount of water behind it. I found the whole thing absorbing and amazing – can you imagine how the architects calculated everything back in the 1930’s without computers? How the concrete was poured into wooden frames to set – you can still see the grain of the wood imprinted on the concrete after so many years? There was a whole story about the concrete – it was originally planned to have a life of about 200 years, but recent tests have shown it will be good for at least 1000. Inside the dam itself, there are bolts drilled into the walls to allow measurement of any movement – one example had moved quite a bit, thanks to an earthquake in the 1960’s.

I’d highly recommend taking the trip if you ever find yourself in the area – it really is one of man’s greatest achievements, not just from an engineering point of view, but also for how it has perfectly fulfilled it’s original objectives.