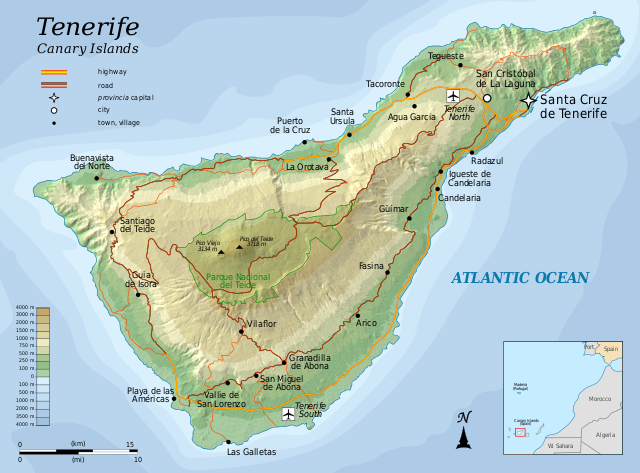 So we’re all organised for our trip to Tenerife. As always, the aim is to try a few excellent hotels and to discover what makes the island “tick.” That means spending some time travelling to all parts of the island, and seeing both the tourist hot spots, and the hidden gems we always seem to discover on our travels.

We’re flying Binter again on one of their little island hoppers – did you know all passengers get a 20KG luggage allowance within the (very reasonable) price? Binter also now send your boarding cards to your mobile phone, so we’re using that service for the first time – must remember to charge it!

We’ll be landing at Tenerife North Airport mid morning and we’ve booked a hire car with our friends at Autos Plus Car. Scanning their list for cars I don’t know and want to try, I discovered the New Smart ForFour, so we’ll be collecting one of those. I’m interested to try it as I think its a novel design, with a rear mounted three cylinder engine. I suspect it might struggle on the hills!

We’ve booked in to the Iberostar Grand Hotel Mencey in Santa Cruz for our first night – the plan is to explore the island’s capital as much as possible on our first afternoon and the following day. Jules has found a huge food market which is on the agenda for the second morning, and no doubt we’ll be doing some shopping. The hotel is a five star and was built in 1950, so its very grand and colonial looking!

From Santa Cruz, we’re heading south to the tourist hotspots. We’ve booked into Pearly Grey Ocean Club in Adeje for a couple of days. This looks an interesting place in a fabulous location. It’s currently a timeshare property, but they are planning to go down the conventional rental route, so we’re interested to find out what their plans are as it looks like a property our clients would really enjoy. While there, we’ll be discovering the resorts of Los Cristianos and Playa de Las Americas and finding out all about those places we’ve heard so much about.

After that, we’re moving onto to the north coast, to Puerto de la Cruz, where we’ll be staying at The Hotel Botanico and Oriental Spa. During the drive over we’ll be travelling to Teide to visit Spain’s highest mountain. We’ll be getting the cable car up there, but apparently you need to pre book to be able to do the final walk to the summit. Sadly we didn’t do so in time, so we’re hoping to spot a cancellation online and take someone else’s slot. If not, we’ll have to go back! The Hotel Botanico is another 5 star and listed as one of the world’s great hotels. We plan to try all the spa facilities there! Obviously, we’ll check out Santa Cruz, which based on what we’ve heard and read, is probably the place we’ll most enjoy during our stay.

Our flight home on the Friday is a late departure, so we plan to explore La Oratava and the historic centre of San Cristobal de La Laguna before spending the rest of our time in Santa Cruz again, because there’s bound to be stuff we missed on our first day.

During our stay we’ve arranged to meet up with some friends who live in Tenerife for lunch and another blogger who we know well from social media, for coffee.

We’ll be leaving the car at Lanzarote Airport car park while we are away. There’s always a temptation to save some money by parking it in Playa Honda and getting a taxi to and from the airport, but parking isn’t too expensive, and its just so convenient to walk out of the terminal and jump in your own car, especially late at night.

Follow us on social media and on this website next week – we’ll be live blogging much of our trip, and look out for the full hotel write ups as we post them!