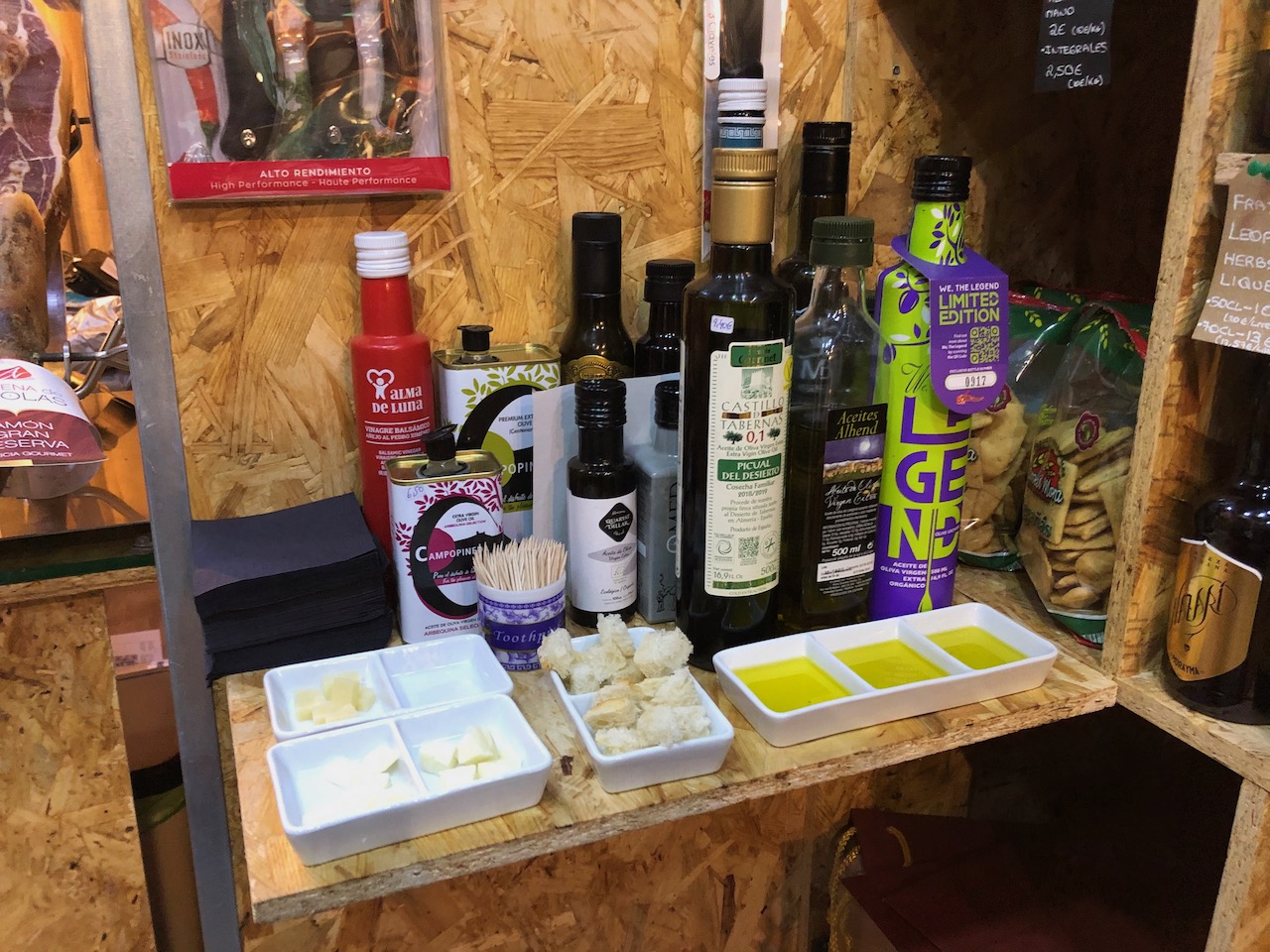 Food and drink play a big part of our travels, so we jumped at the chance to meet one of the Spain Food Sherpas for a Taste of Granada Tour during our brief road trip on the mainland.

Our Food Sherpa was Katia, a fascinating lady originally from Russia, who has made Granada her home for the last 15 years. We started our Taste of Granada Tour with a visit to two specialist food shops.

Our first experience was to taste and understand the difference between the types of Jamón Ibérico. The owner of Ibérica, Iván is a Jamón artisan and an expert in the art of slicing jamón. We tasted 3 different hams, the first a Jamón de Trevélez, produced from the white pig breeds of “Landrace”, “Large White” or Duroc-Jersey fed on a vegetable diet. The second was Jamón Ibérico de cebo de campo, these are a cross breed pig who spend some time in pasture and have a limited amount of acorns included in their diet. Then there is the ultimate, the Jamón Ibérico de Bellota, an Iberian black pig who spends their full time in pasture feeding on grass and acorns. 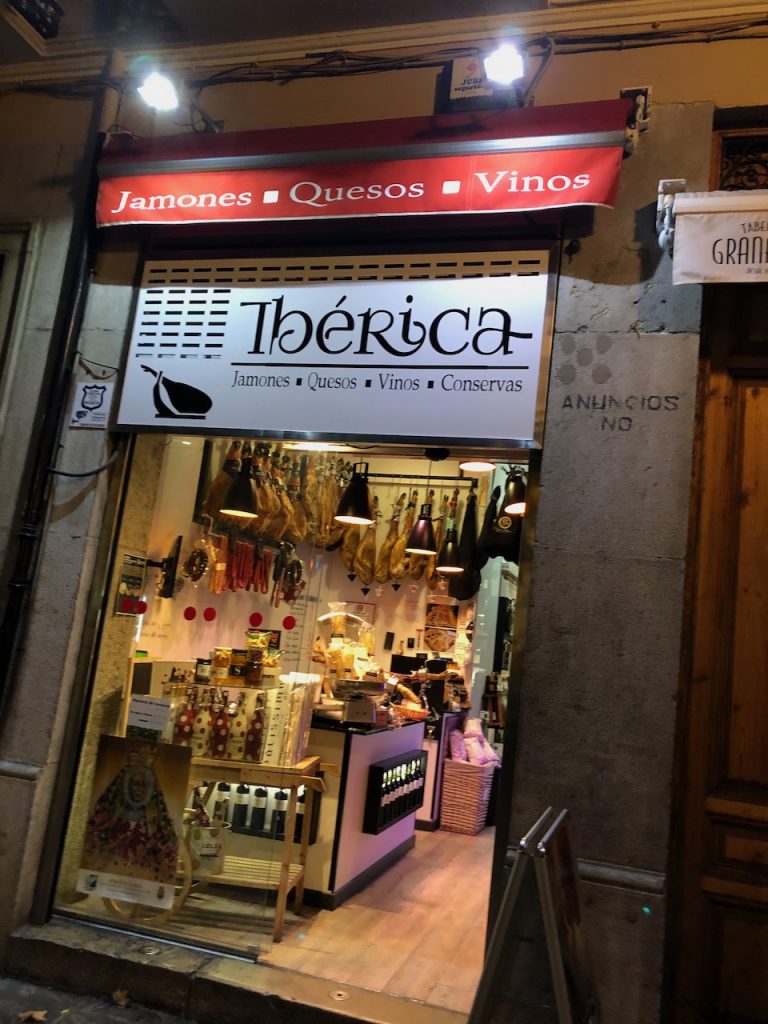 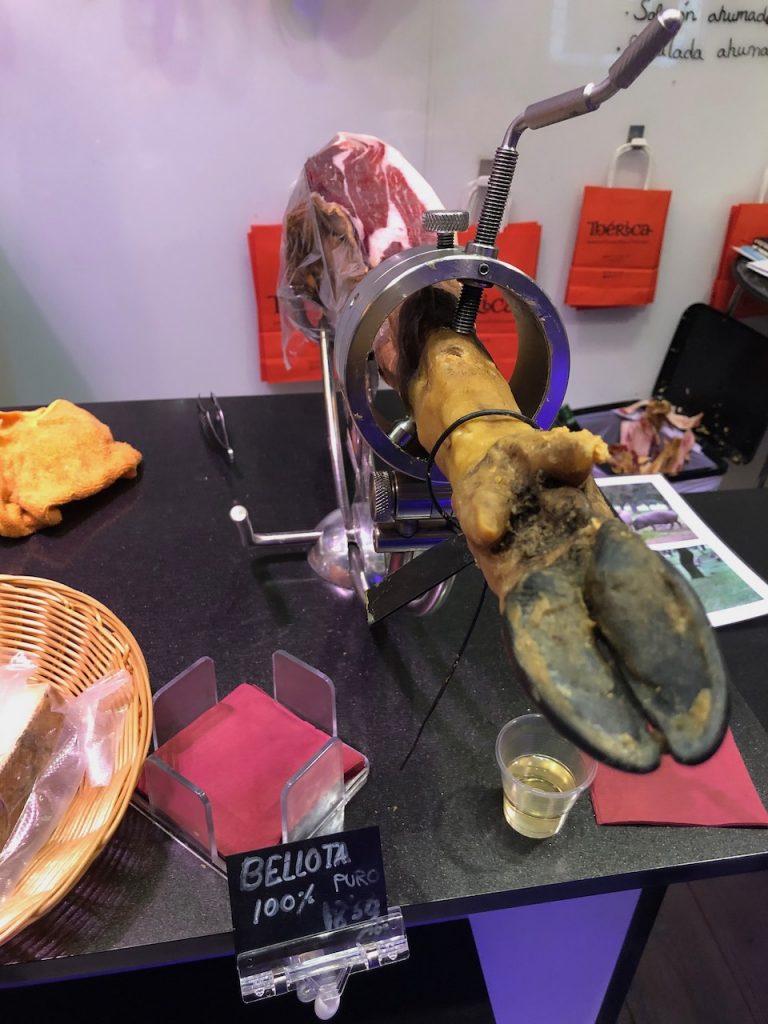 Note the worn hoof from time spent in pasture 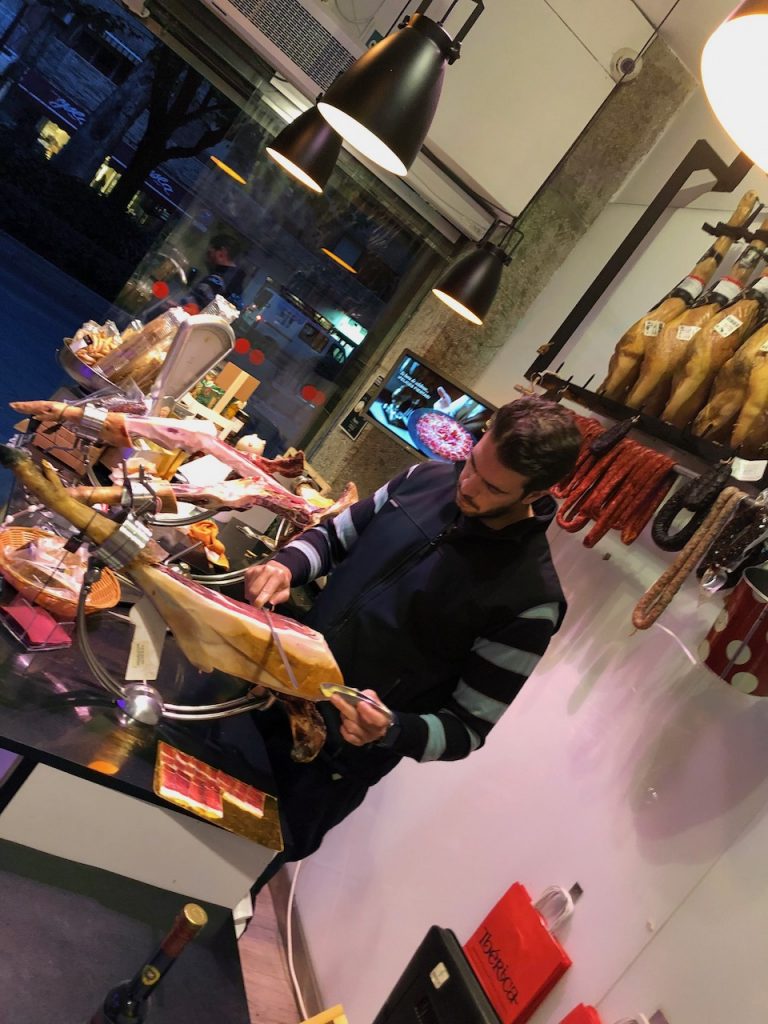 We purchased the Bellota, the darker in colour and more marbled of the hams, need we say more!

Next stop was the Andalucía Delicatessen where we tasted award winning extra virgin olive oil and cheeses, plus artisan chocolate produced in the region. 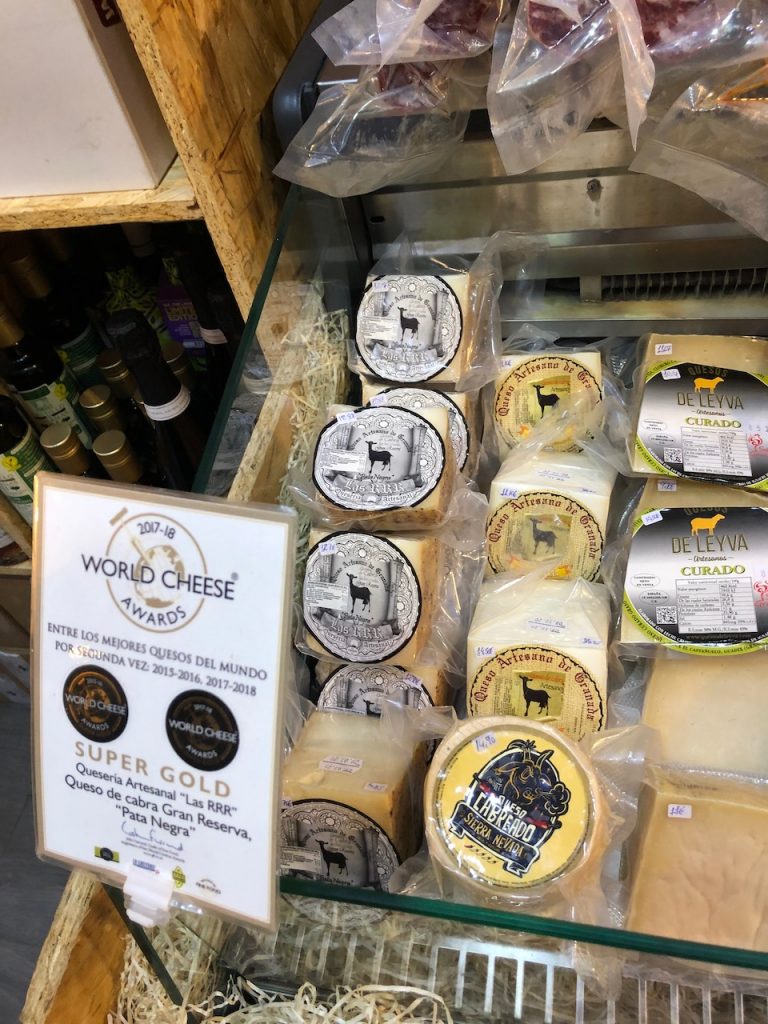 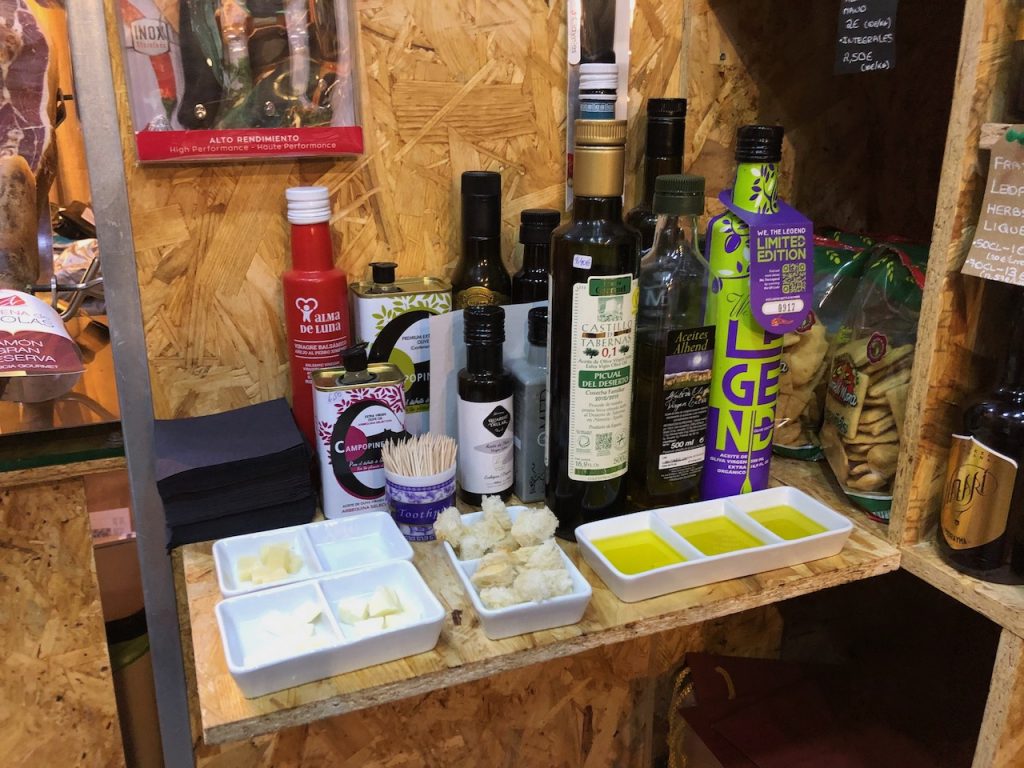 Tasting the best olive oil in the world produced in Granada 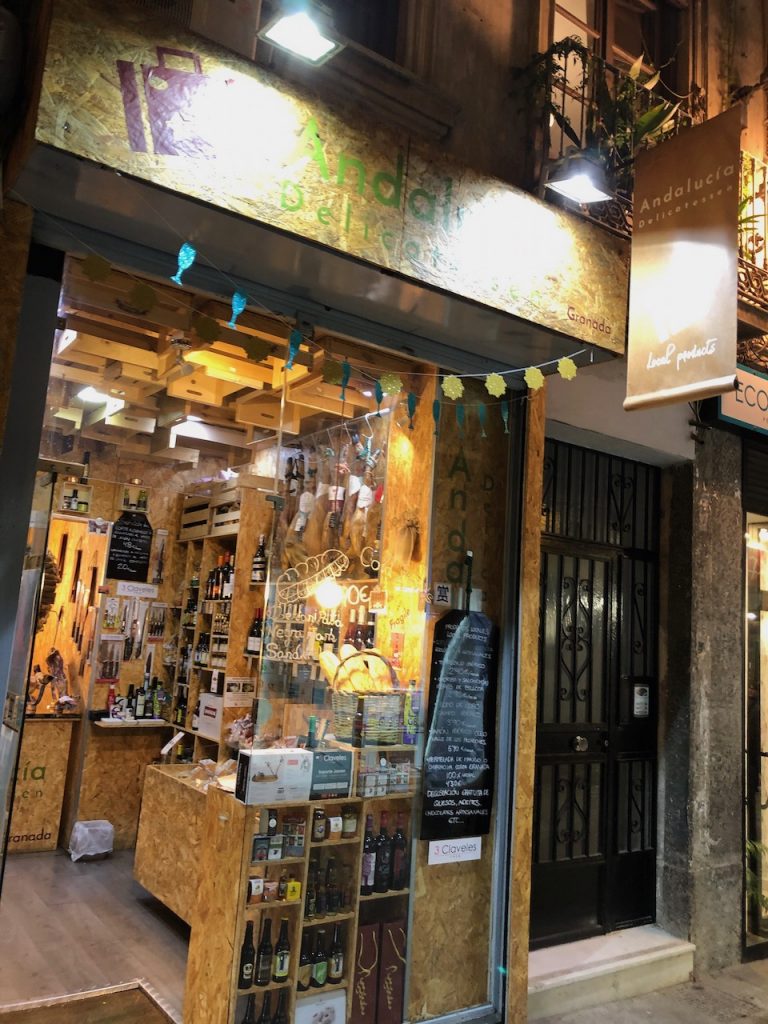 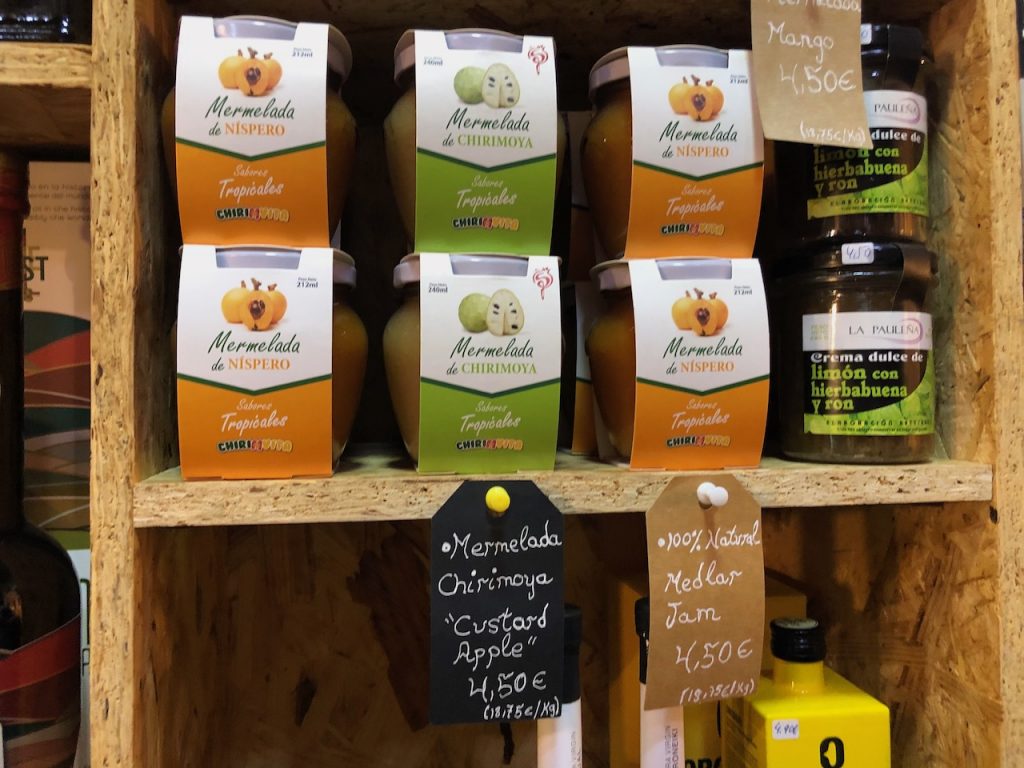 First taste of a Chirimoya 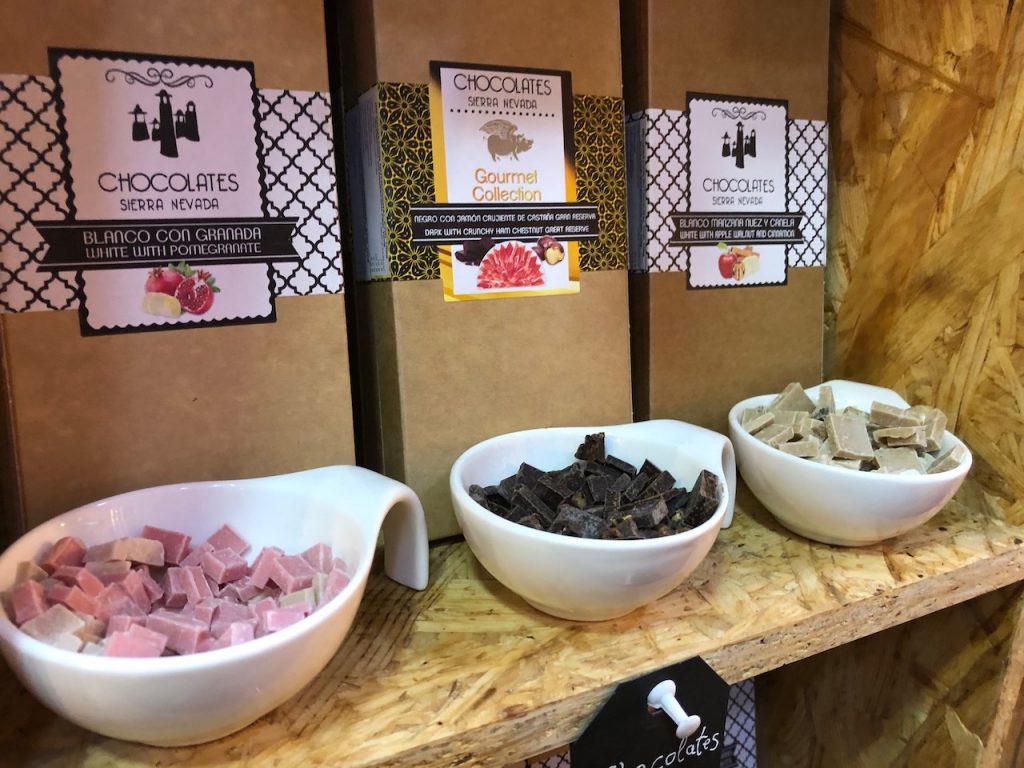 Artisan chocolate made in Sierra Nevada 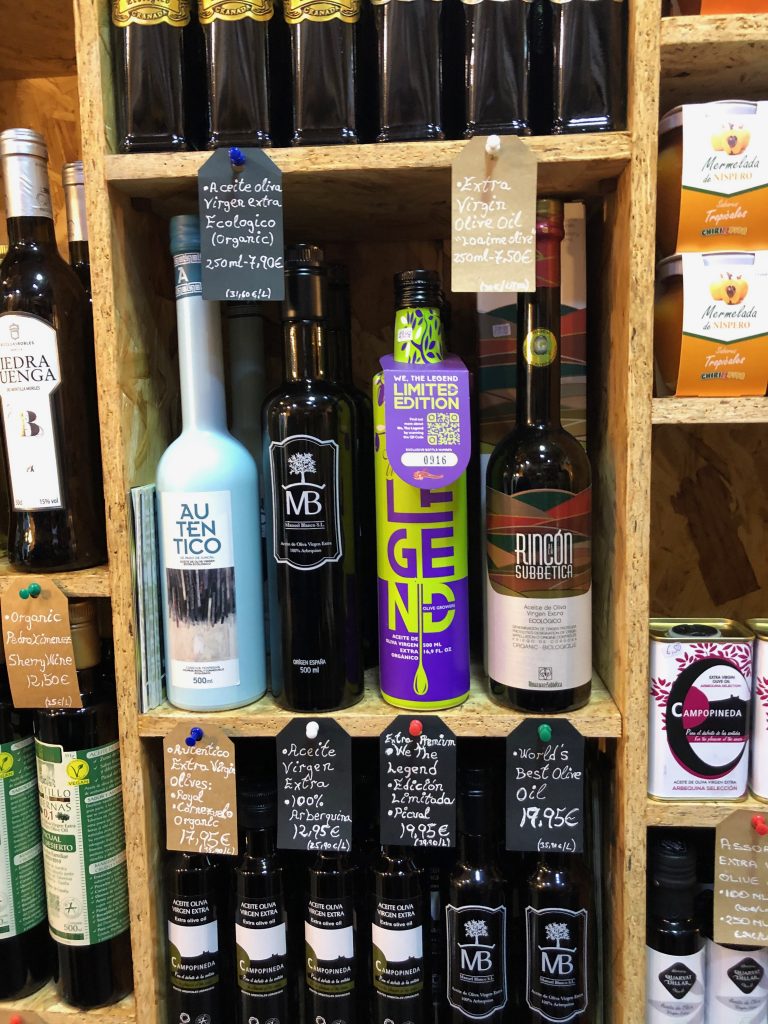 The extra virgin olive oil tasting was interesting, first we tried the oil with bread, to determine our favourite. Next we tasted the selection of cheese, finally we combined our favourite cheese with the best olive oil and wow! We bought a bottle of Rincón de la Subbética produced from an early harvest of Hojiblanca olives and currently acclaimed to be the best in the world. This olive oil has an intense, green citrus aroma, initially sweet with a spicy finish on the palate. We’d never tasted Chirimoya before, a jar of this jam also made it into our shopping bag, along with a bar of chili chocolate from Sierra Nevada.

Our first restaurant stop on the Taste of Granada Tour was going to be hard to beat! Alameda has been recommended by the Michelin guide for 4 consecutive years. The chef at Alameda takes the freshest seasonal ingredients produced locally to create traditional regional dishes, with a contemporary twist. Our first dish of Salmorejo was paired with a chilled glass of Albariño white wine from Pazo Señorans. 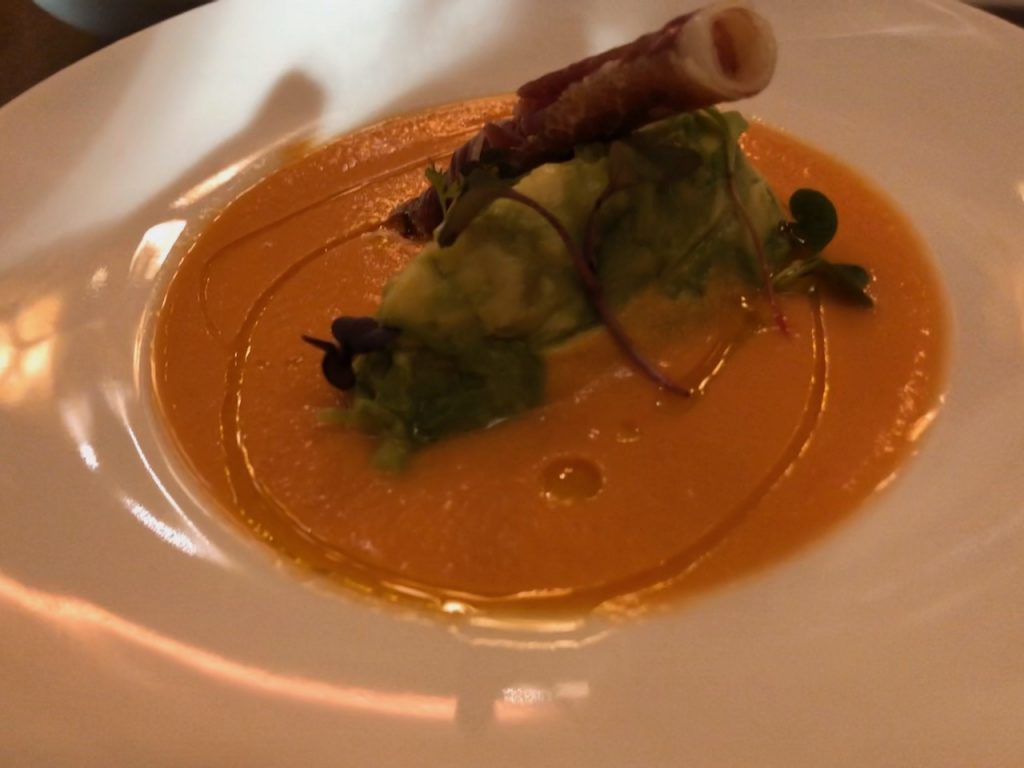 Salmorejo with mango and avocado 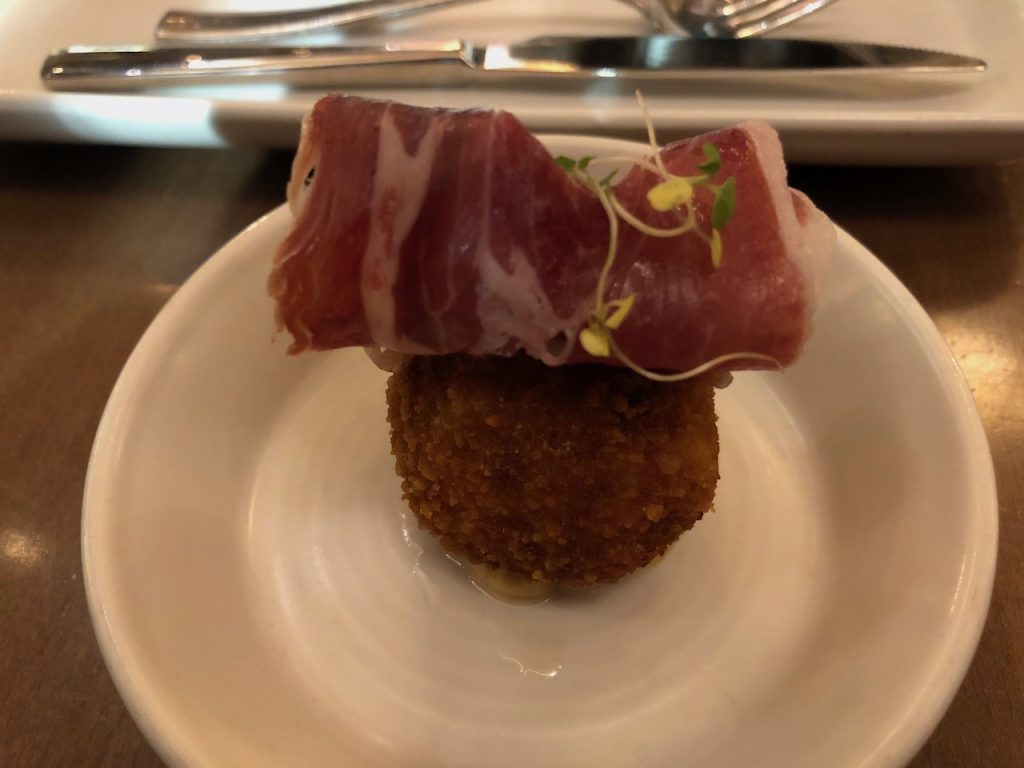 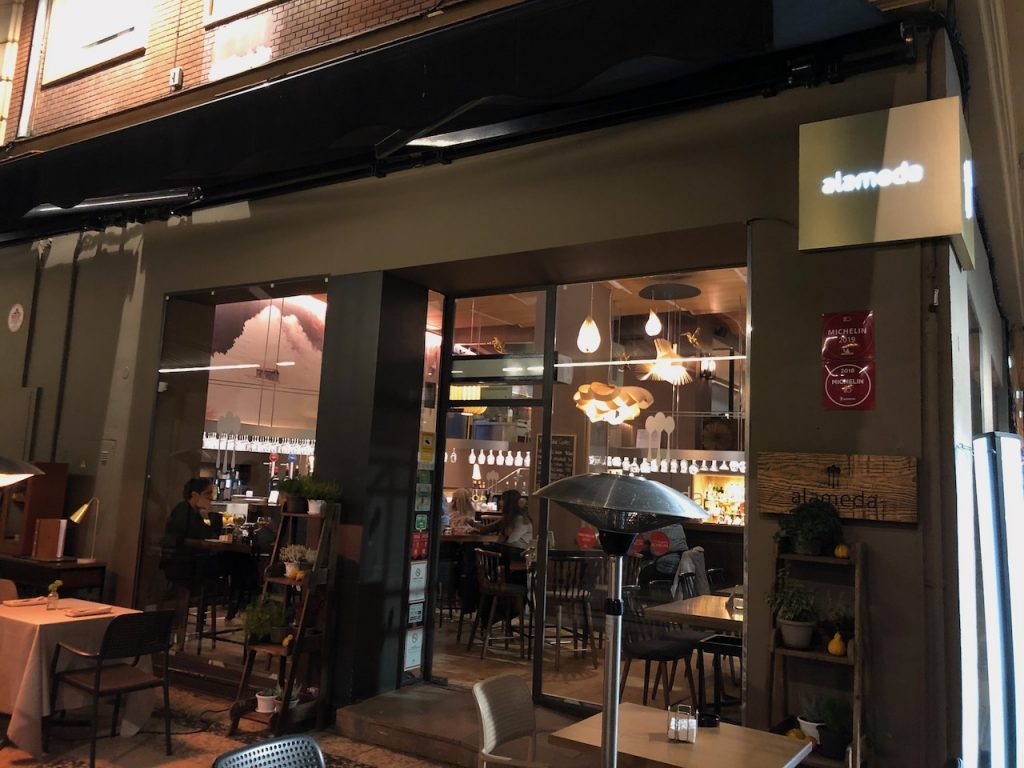 The twist with the Salmorejo was a sweetness from mango, served with avocado and a roll of ham. Our second dish at this location was a croquette. The impressively crispy exterior gave way to an intensely rich beef flavoured creamy filling, created from bull’s tail (Rabo de Toro).

Walking though a stunning souk on route, we arrived at our second restaurant, this time to taste the house speciality of vermut. Taberna Restaurante Más que Vinos simply oozes with personality. Their vermut can’t be taken away, it’s only available to drink within the premises. 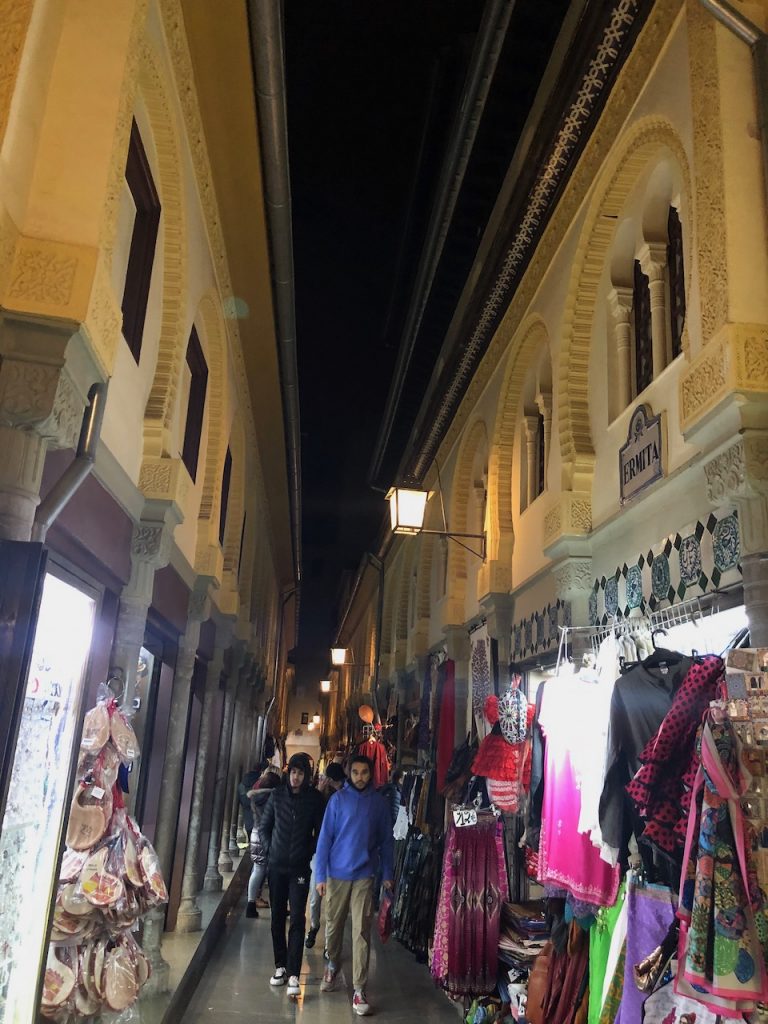 Walking through the souk 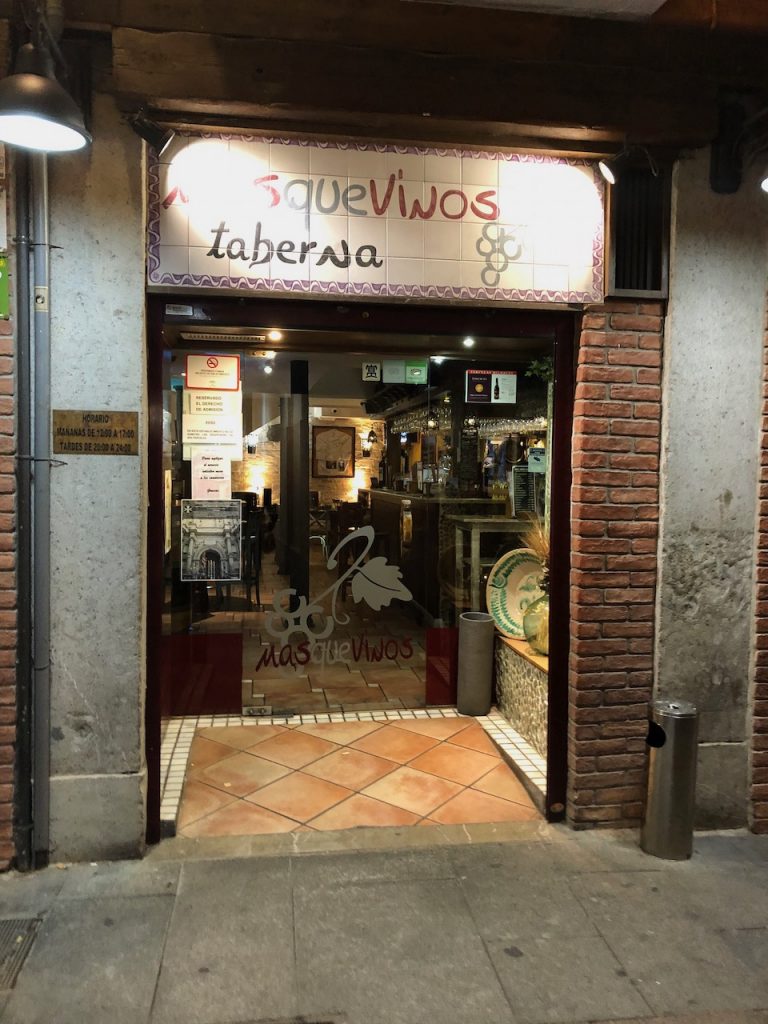 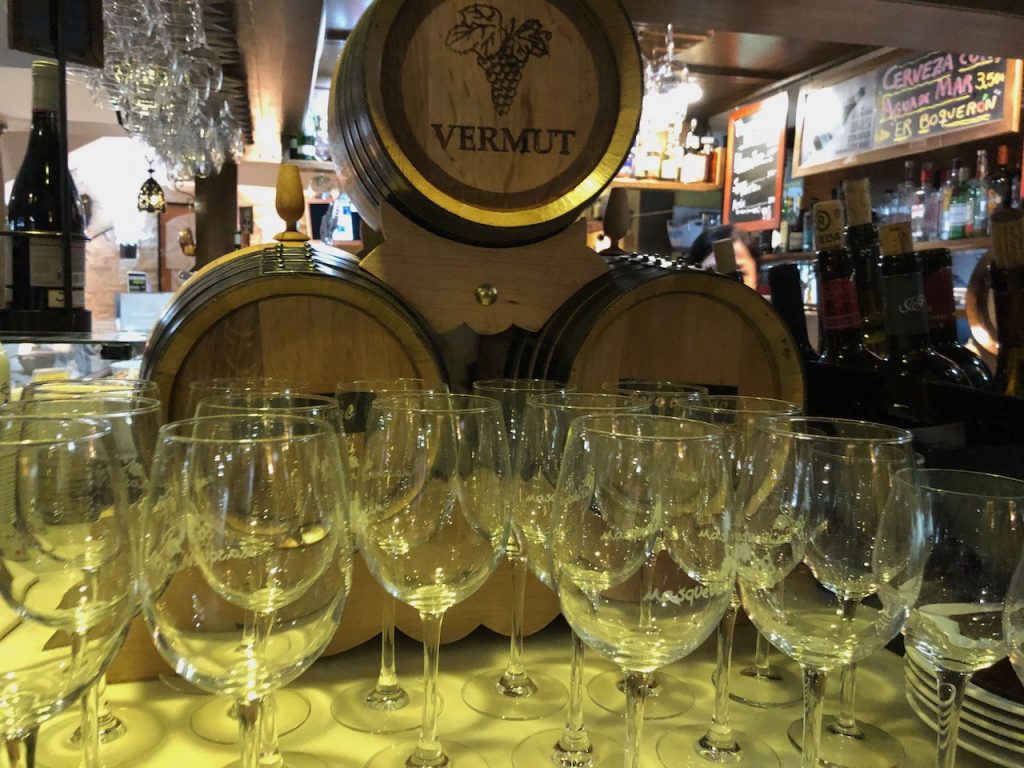 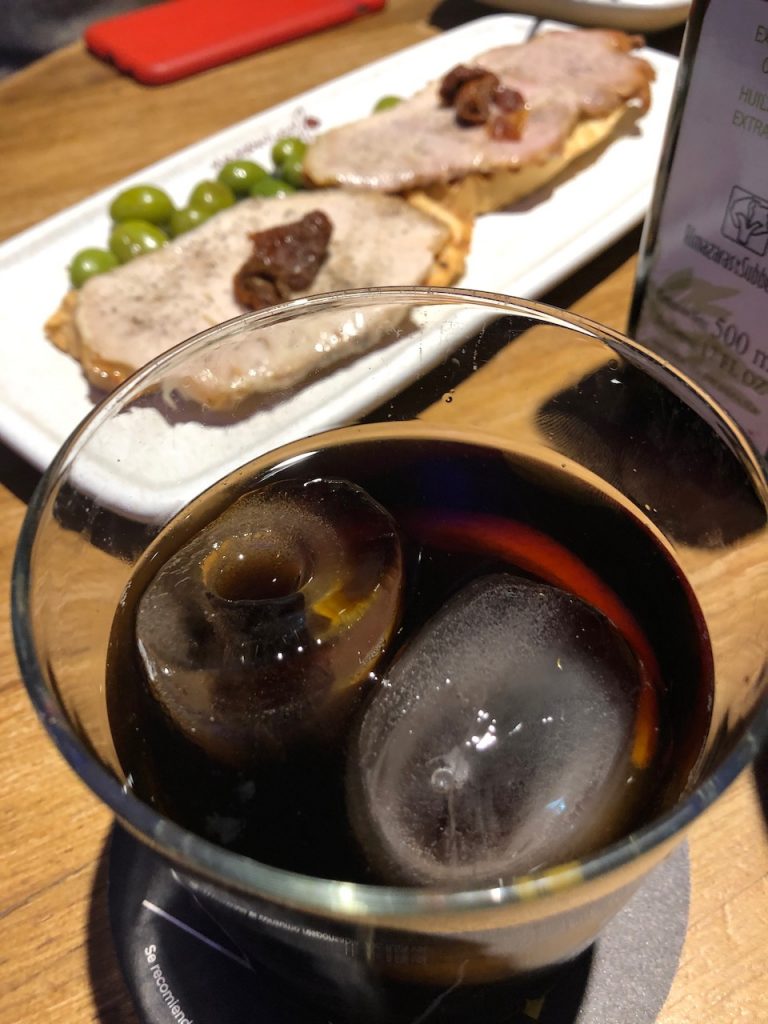 Vermut is the summer drink in Granada

We were stunned, normally not fans of vermut we adored this drink! Served over ice with a slice of orange, the vermouth was packed full of spices. For me it was Christmas in a glass! Paired with a tapa of lomo. The thinly sliced pork loin was served warm on bread, with sun dried tomato and a drizzle of extra virgin olive oil.

The third and final restaurant of the evening was the renowned Restaurante Chikito. Pushing our way through the packed bodega, we were seated in the restaurant next door. Our first dish was Remojón Granadino. This is a sweet and salty salad combining salty cod with tangy pieces of orange, black olives, spring onion and scattered with pomegranate. Next was a Cazuela de Espárragos Verdes, this green asparagus stew with ham and almonds was amazing. Finally to finish we tried the typical cake of Piononos, named after Pope Pius IX’s Italian nickname, “Pio Nono”. These bite size pastries are filled with egg custard, cinnamon and soaked in rum. 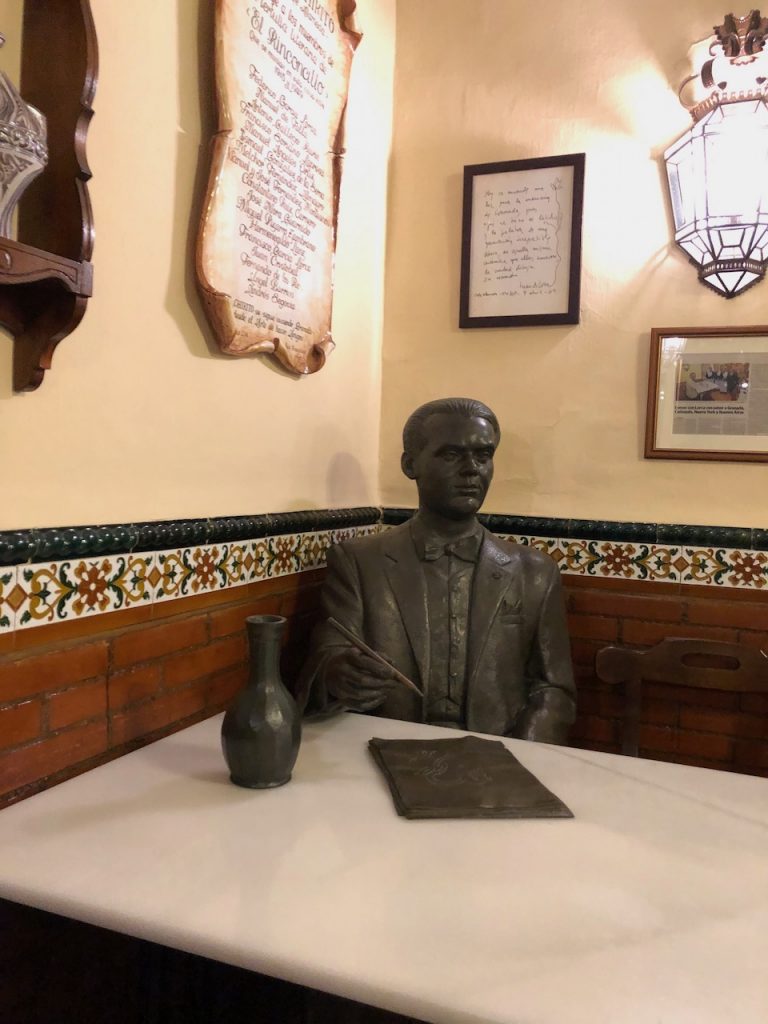 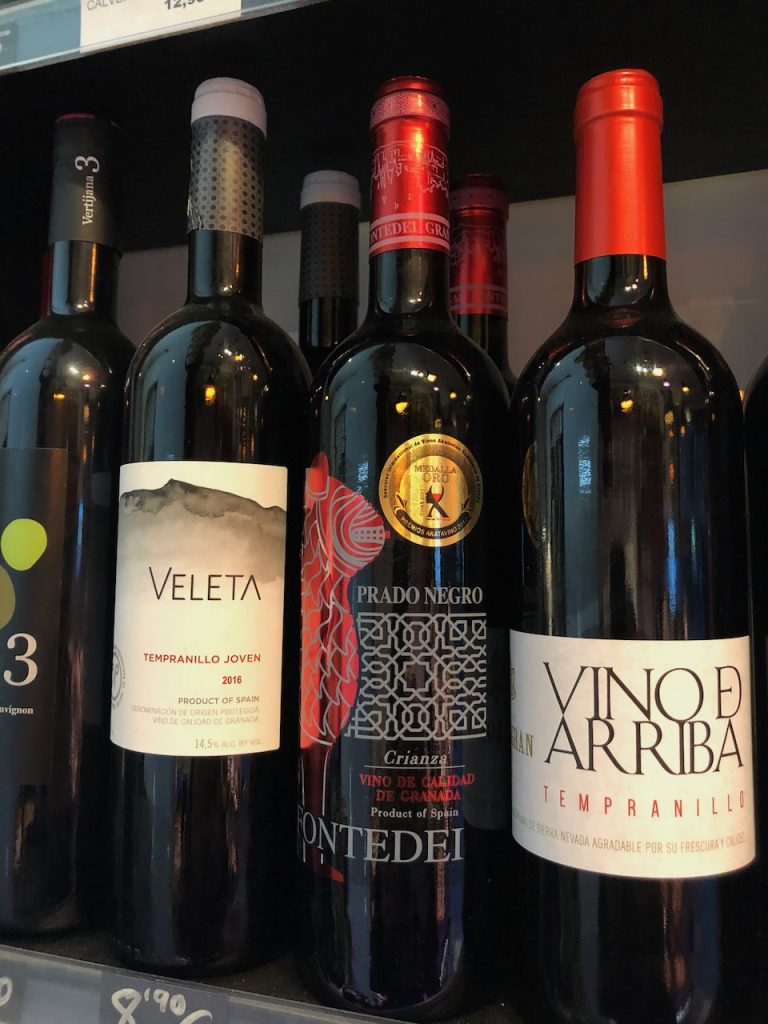 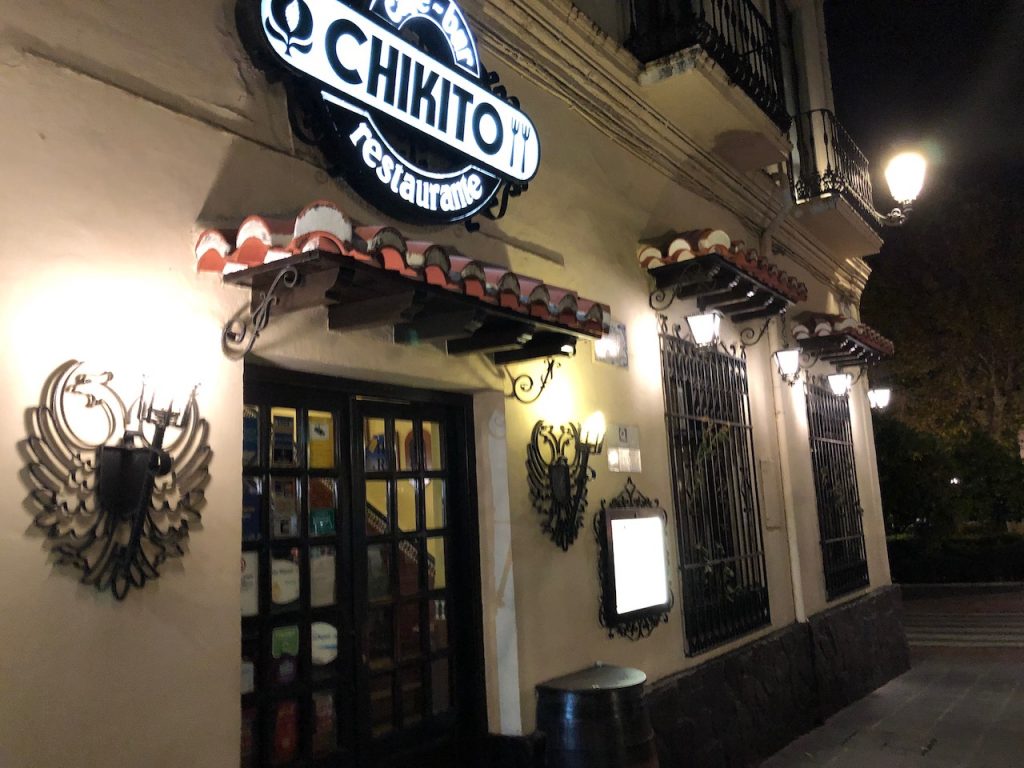 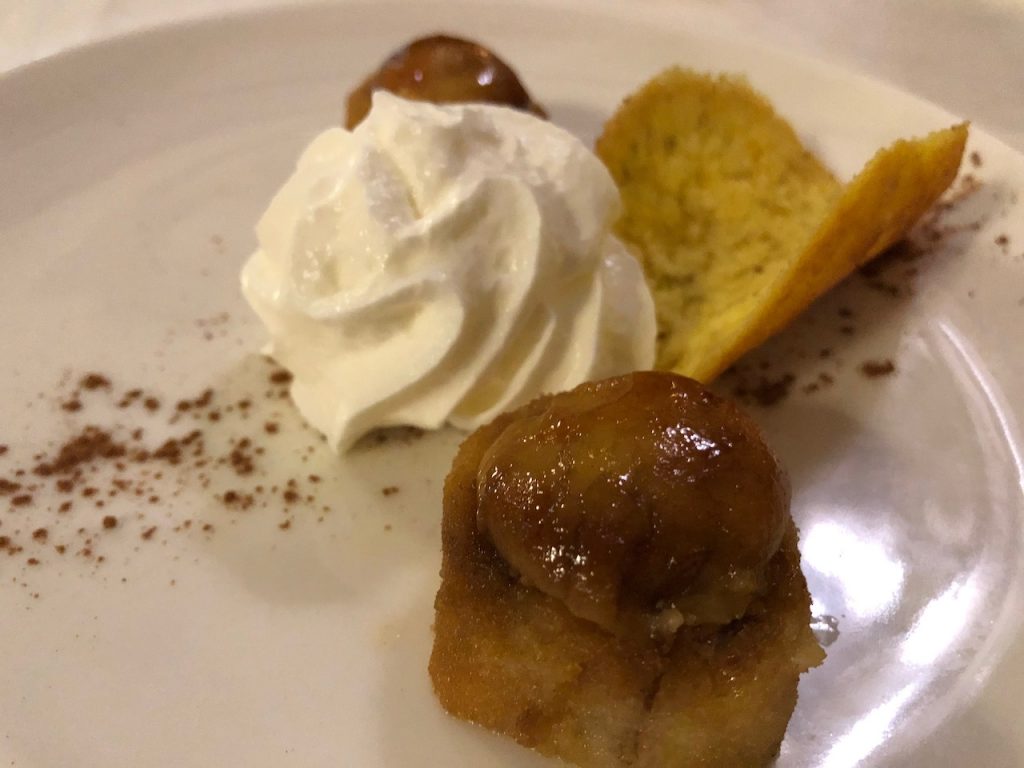 Our final tasting was paired with a red wine, Crianza Prado Negro from Bodegas Fontedei. This award winning tinto is a combination of 3 grape varieties: Tempranillo, Cabernet Sauvignon & Merlot then aged for 11 months in French oak barrels. You can’t help but notice the table in the back corner dedicated to Spanish poet, playwright, and theatre director, García Lorca.

Our taste buds were sated, having thanked Katia for a fabulous evening, there was nothing more we could do than enjoy a stroll back through the centre of Granada to our hotel.

This 3.5 hour Taste of Granada Tour is an excellent way to discover the real Granada. You will meet some fabulous locals, whilst learning lots about the history and rich culture of Southern Spain. These food tours are available in Granada, Malaga or Seville, for more information please visit: https://www.spainfoodsherpas.com/