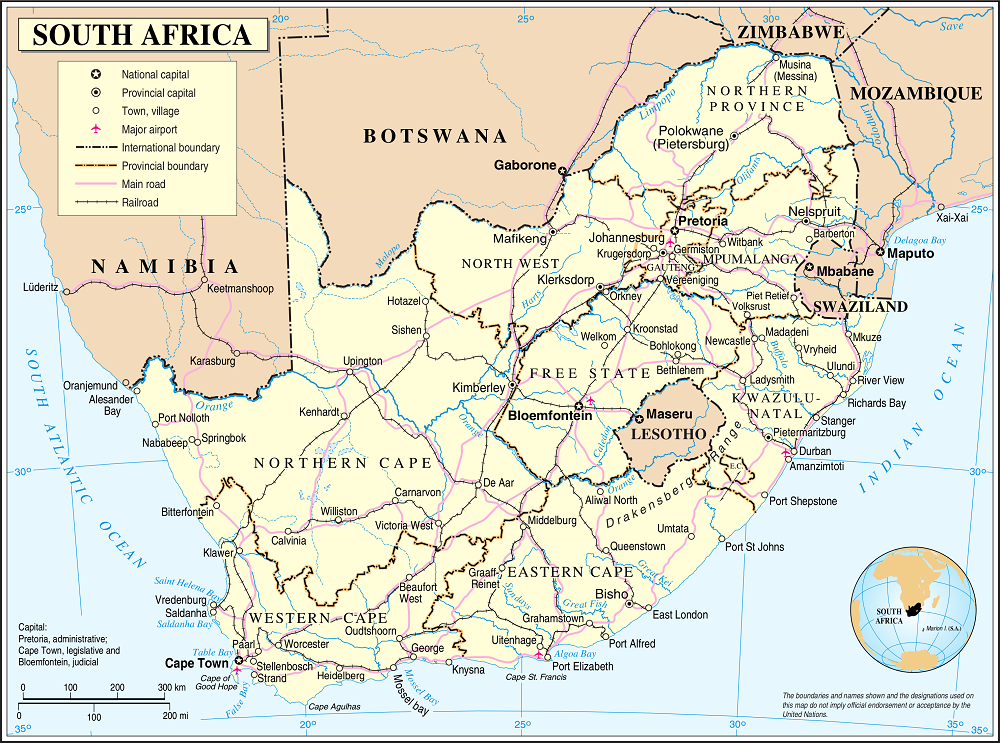 South Africa draws many visitors for a variety of reasons, beach dwellers head for Cape Town in December & January, safari seekers head for the parks during the dry season from May to September, the Cape Winelands harvest attracts wine aficionados from January to March, walkers like to visit during Spring and the Garden Route is spectacular all year round.

This is a diverse country, the coastline has two oceans and stretches 2798 km from the desert border with Namibia to the subtropical boarder with Mozambique. The South Atlantic and Indian Oceans meet in the Western Cape at Cape Agulhas.

Seasons
The four seasons are summer (December to March), autumn (April to May), winter (June to August), and spring (September to November).

Low season is from May to September, which is the wet season and winter in South Africa. This is the best time to visit for the safari parks, as the animals are more visible and found gathering around waterholes. The months of June, July and August is the coldest time of year in South Africa, warm winter clothing is recommended for early morning and evening.

High season is from October to April, which is the dry season and summer in South Africa. This is the best time for a beach holiday in Cape Town. The hottest months are December, January & February, showers are usually a short downpour during the afternoon.

The Western cape is the exception as it has a similar climate to the Mediterranean, with hot, dry and sunny weather during the summer and rainy conditions during the winter. For Cape Town specifically, driest months are November to March, the warmest and driest month is January, the coolest month is August, the wettest month is June.

For Durban the summers are hot and winters warm, the warmest months are December to February with January being the hottest & wettest month, the rainiest months are November to March and the coolest month July.

The best weather months are considered to be April, May, September & October.

For whale watching visit between June and November, the peak time is in September.

Snorkelers and scuba divers wanting to experience the famous Sardine Run should visit from May to July when millions of sardines travel from the Cape up the South coast towards Durban.

Climate
South Africa is a diverse country with regional subtropical climates. These are the average minimum and maximum temperatures in South Africa as provided by the met office.

Averaging 8 to 10 hours of sunshine per day in most regions. The average rainfall is 450mm, the rainfall is greatest in the east, decreasing gradually westwards. Some winters it can snow in the Drakensberg area.

Cape Winelands: The towns of Stellenbosh, Franschhoek & Paarl are in the heart of the Capes vineyard covered mountains

Kruger National Park: Vast game reserve where you can find the Big Five

Plettenberg Bay: Plett has it all, beaches, forests and winelands. A good base to experience the tree top Tsitsikamma Canopy Tour

Port Elizabeth: Founded as a town to home British settlers, now the 5th largest city in South Africa. Famous for Addo Elephant National Park where you can see the Big Seven

Entry Requirements
Your passport must be valid for at least 30 days from your date of exit and have a minimum of 2 blank pages for immigration. A visa isn’t required is visiting for tourism and up to 90 days. UK Emergency Travel Documents are accepted for entry into, transit and exit from South Africa but should have a minimum of 6 months validity.

Since June 2015 there are strict immigration rules for children travelling to South Africa under the age of 18 years old.Children need to travel with the full unabridged and original birth certificate, certified copies will also be accepted. There are more requirements if both parents are not travelling with the child. Please visit childtravel19jun2015 for more specific information.

If you have travelled from a country with Yellow Fever or been in transit through an airport of a country with yellow fever for 12+ hours, you must have a certificate issued at least 10 days before arriving in South Africa.

Health
Care should be taken to avoid being bitten by mosquitos when visiting South Africa, travellers are at risk of contracting Malaria. You may want to consider a vaccination for Hepatitis A and Typhoid, as travellers can get both through contaminated food or water in South Africa.