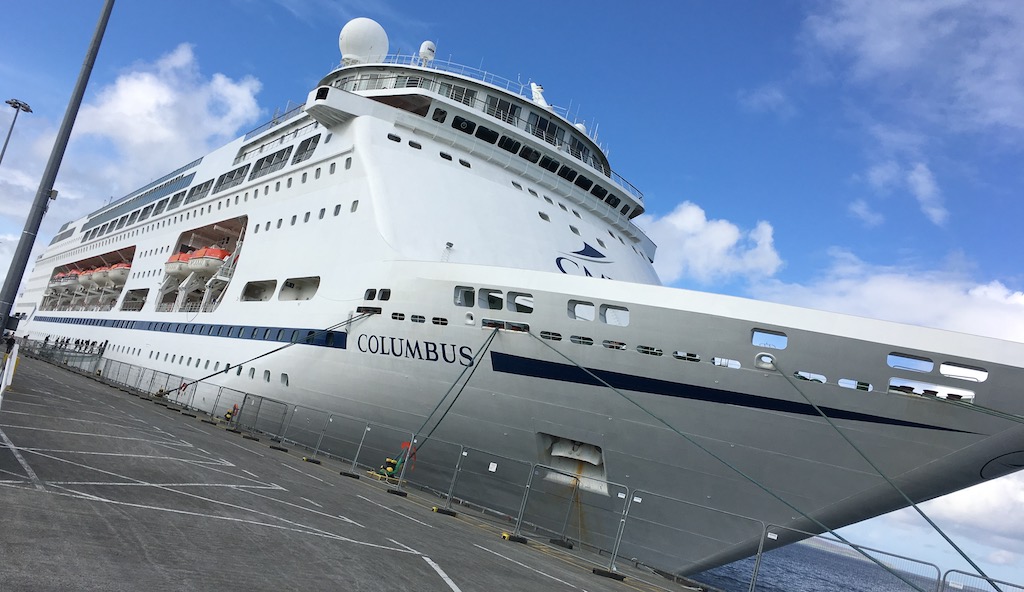 As you may know, we haven’t done a cruise before, I was curious to know how the embarkation procedure would work, and if getting a large number of people aboard ship would run smoothly.

We had elected to join the ship via a coach service laid on by the cruise line from Victoria coach station. Many of our fellow travellers drove themselves to Tilbury, and paid to park their cars nearby.

We took the Gatwick Express from the airport into Victoria – it’s a fast, stop-free journey. I had wrongly assumed that Victoria coach station would be part of the train station, but it isn’t. It’s about a ten minute walk, which is quote tough going with two 23 kilo suitcases as well as hand luggage.

We arrived in plenty of time and checked in at the appropriate gate where we were allocated coach 4 of 4, all heading to the ship. Victoria Coach station is a complete pit – not enough chairs, generally unclean and with disgusting toilets which cost a princely 30p to use. I’d advise anyone using the coach station to arrive at the last minute, rather than choose to wait in the station itself.

We eventually boarded a very nice coach and were on our way to Tilbury. As it was a bank holiday, traffic was light, and the journey took just over an hour. We pulled into London Cruise terminal and were dropped right outside the main door. We had previously tagged our cases and we were told they would be put right outside our cabin, so we began the process of checking in.

As ours was the last coach, with only 22 aboard, we flew through embarkation. We completed a health declaration, went through passport control and were issues with our cruise cards. CMV operate a cashless system aboard ship, so your cruise card is your cabin entry key and your method of paying for anything aboard, as well as being used to swipe you on and off the shipping port. They take a swipe of a credit or debit card at embarkation and everything is charged to your card.

It’s a lovely feeling walking up the gangway and entering the hushed, cool interior of the ship. You come aboard into the “atrium” which covers three decks in the centre of the vessel. Deck 5 of the atrium is like the hub of the ship, with a large reception area.

We went straight to our cabin to check it out, and we were pleasantly surprised! We were on deck 10, with a superior outside cabin with a large picture window. The cabin was the size of a decent hotel room, with tons of storage space. The en suite bathroom was also spacious with an excellent walk-in shower. Our steward, Hau, (no idea on the spelling,) introduced himself and showed us how everything works. The cabin had tea and coffee making facilities and a flat screen television, as well as a thermostat for our own air conditioning.

One thing that struck me throughout the trip was how incredibly quiet our cabin was. You genuinely cannot hear the engines from deck 10 – there was no vibration at all. In fact, when the sea was calm, you would barely know you were moving at all.

We’d been aboard for less than an hour when we were called for a lifeboat drill. Confusingly, having studied our muster point in the cabin, we were directed away from that to join all the new boarders in one of the bars, complete with our lifejackets. It took some time to check everyone was there, and it became really hot in the room. Once that was done, we filed outside to stand where we would be expected to in the event of a real emergency.

Once that was done, it was time to begin our cruise and Columbus was swung around in her own length by two very competent tugs, and we headed down the Thames, taking about 4 hours to get out of the estuary and into the open sea.