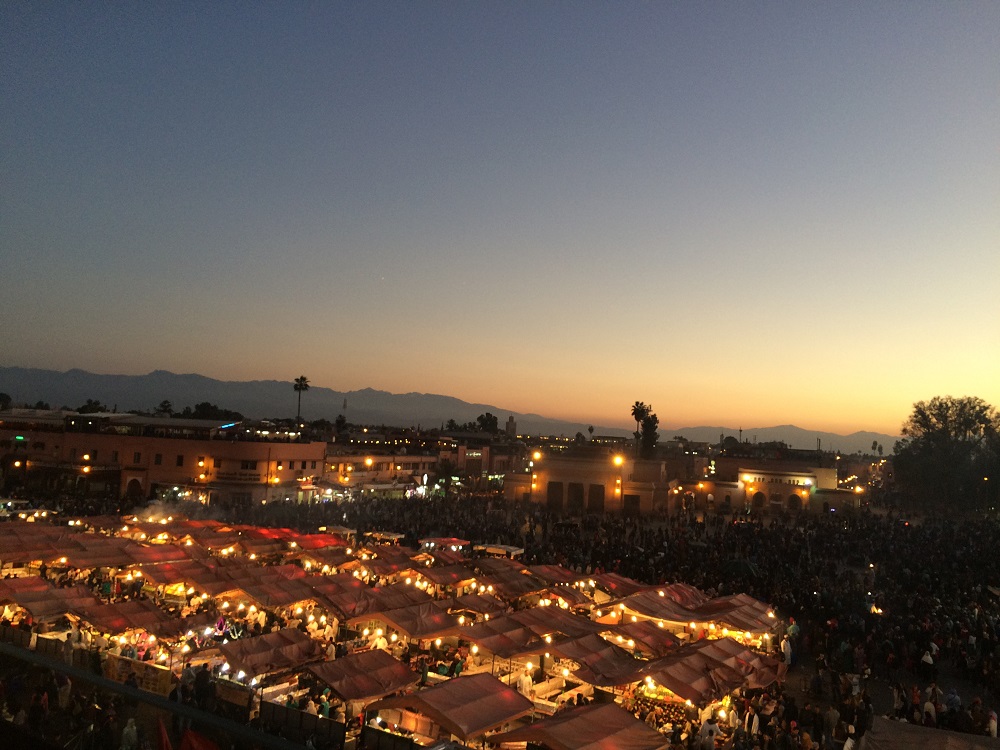 Every guide book to every destination on the planet seems to fall back on the oldest cliche of all – “It’s a country / city / town of contrasts.”

But in the case of Morocco, I have finally found a place worthy of that hackneyed phrase. On the one hand, I have never witnessed such abject poverty at close quarters, and on the other, I have seen more Maseratis during my week here, than I have in my previous 54 years of travelling.

We spent a week travelling all across the north of Morocco – as residents of Lanzarote, Morocco is actually our nearest neighbour, and we have wanted to learn more about the country ever since a brief, one day visit many years ago. We spent time in Tanger (you may know it as Tangier, or even Tangiers,) Casablanca, Marrakesh, Fes and Rabat. We drove around 1500 KM, and walked at least 100 more, learning and discovering all we could about the country and the diverse races that call it home.

This is a precis – you can read much more detail about where we stayed and what we did in each city. These are my initial thoughts, and should serve as a scene setter for those considering a trip, and as a place where I have recorded my impressions, both of the country and the people.

Entrepreneurs
Morocco is a country of entrepreneurs. With no social support system in place, if Moroccans don’t earn, they don’t eat. That simple fact has created a whole nation of men (and it is always the men here) who will sell anything, to anyone, for a few Dhiram. From boys as young as 6 selling tissues at traffic lights, to the guides who subtly engage you in general conversation, before revealing they can guide you around the local souk.

In some ways I admire their spirit and undoubted skill, but the result is the country is in danger of biting the hand that feeds it, tourism. They currently welcome around 10 million tourists a year to the country, and have a plan to double that by 2020. Their problem, if they don’t grip the scammers and con men, is that they won’t have a chance of achieving it without repeat business. And based on my experience of a week here, I have no plans to return to Morocco.

Our worst experience was in the city of Fez. As soon as we hit the outskirts of Fez and stopped at a traffic light, a man on a scooter shouted at me to follow him to the medina. I ignored him and carried on, but he followed, and at every stop shouted angrily at me to open the window. I eventually lost him with some slightly reckless driving, only for him to be replaced by another man, shouting the same thing. At several stops I told him I knew where I was going, and wasn’t interested, until I eventually totally lost my temper with it, and bawled at him to “F*ck Off!” That worked.

At every single traffic light between the outskirts of the city and our destination, there were people begging or selling something. Stopping anywhere near the front of a set of lights resulted in people tapping windows from both sides, or shouting for money, or offering to “take us where you want to go.” It really was like being in some kind of nightmare, and there were dozens of police around, who chose to simply ignore what was going on.

We then carried on to our planned stop in a Riad – these are smaller hotels, in the old parts of the towns, or Medina areas. Pulling up in the street close to the Riad, we parked. The unofficial parking attendant immediately demanded 5 Euros to “look after” our car, and called over a young guy to take us to the Riad. We explained we knew where we were going, but the lad just fell into step with us. He tried hard to sell us on a guided tour, which we steadfastly refused. Several times he said he’d be “back for us in an hour.” Once again, he held his hand out for money for showing us the way – all of 90 seconds of his time.

We relaxed when we finally reached the hotel and began the check in process with the person we assumed was the owner. As we completed the forms, another young guy arrived and told us we needed to move our car. “Why?” I asked. “It’s not safe where it is, and it will be taken away or damaged. You need to move it to another place.” I told him we’d paid a guy to look after it. He insisted that we needed to move it, and that he would take us to a safe place to park. He promised that the first guy would refund our money, and we had to pay a new guy. We got to the car, and there ensued a huge argument between him and the original guy, conducted in Arabic, and no money was forthcoming. “Our” man insisted that he would sort it out, and jumped into the car and we moved no more than 50 metres down the road to a “safe” place. I asked him if he worked at the hotel. He described himself as “Responsible” for the hotel. At that point we cut him loose and drove off. Fortunately, we hadn’t taken our cases into the hotel, so all we lost was the €50 we’d paid to stay there. We were happy to do so – Fez is quite clearly in the control of a kind of Mafia-like group, whose basic aim is to fleece tourists for as much money as they can get.

Based on our experience of other cities in Morocco, Fez is the worst from this aspect, but to varying degrees, they are all suffering from it, and it is likely to get worse. There appears to be a whole generation there who have grown up believing it’s almost a right to demand money in return for offering unasked-for help. And they’re not at all shy about it either. We were collared by a man in one city who simply walked alongside us for ten minutes chatting. At the end of it he asked us if we would reward his time with just a little money, so he could enjoy a bottle of wine with his wife – “I haven’t worked for four days,” he told me. I thrust the equivalent of €5 in his hand, and he said “€5 isn’t much, is it?”

More hardened travellers may suggest that it should be easy to avoid all of this, but it isn’t. There are times when you feel hounded in Morocco, and you can never seem to pause for a moment to enjoy a view, or check your guidebook, because you know someone will immediately appear to “help.”

Poverty
All of that aside, on a human level, the country can be quite distressing. Much of the population live in what I can only describe as shanty towns, and use horse drawn traps or strange trikes made from the front of a motorcycle welded onto a trailer. The better off have scooters, and they are absolutely everywhere.

It seemed to be completely normal for youngsters to wait around when we had a meal and to sit down and finish off whatever we had left. On the one hand, the restaurants are showing some compassion in allowing them to do so, but it’s shocking to see it, and after the first time, to know why they are standing outside, arms folded and waiting.

Driving
The only driving law I saw being enforced was for speeding. There are static and mobile speed cameras everywhere, and it’s effective. Traffic on motorways generally sticks to the speed limit, and in towns it moves very slowly indeed, which is a very good thing, because it’s absolute chaos! Nobody stops at pedestrian crossings, lane discipline is almost non existent, and you might even meet a car going the wrong way up a dual carriageway. In fact, on one occasion, I was instructed to lead a group of cars doing just that, to avoid following a bunch of marathon runners. “It’s OK, the policeman said, put your four flashing lights on and go!”

And you know what? It actually all works! We didn’t see any accidents, and I think it’s because everything happens slowly, and everyone drives on maximum alert, because anything can and will happen!

You can pretty much do what you want on the road, and don’t be surprised to see Mercedes Taxis carrying 7 passengers, or whole families crossing a motorway on foot.

Rural Morocco
As you can see from our itinerary, we spent times in the major cities of Morocco, but my abiding memory of the place is from our journey into rural Morocco – we drove to the edge of the Atlas Mountains, travelling several hundred kilometres on B roads, and the countryside was fascinating. Small villages where donkeys remain the primary means of transport and the river is where clothes are washed appear every few KMs, and in between there are goatherders, with perhaps a dozen animals to look after. In the villages, mint is grown everywhere, which provides a fabulous perfume, and children are seen transporting huge stacks of mint, presumably to be sent to the towns to be drunk with tea.

Rural Morocco doesn’t suffer from the same rampant “selling” spirit of the towns, and it was wonderful to stop at little cafés for food or drink, at super-low prices, and not be “hit on” for anything.

The Food
The one thing I loved about the country was the food, and of all the food, I most adored Arabian Breakfasts! A sumptuous feast of flat breads, jams, honey, tea and cheese that set us up wonderfully for each day’s travel.

And then of course, there are the Tagines. I really had no idea how important preserved lemons were in creating the authentic tagine flavour, but having now learnt the art, we enjoy a taste of Morocco at home regularly.

Summary
I’m pleased we did this trip, and I now know much more about our nearest neighbour, but as I said at the top, I don’t plan to revisit for the time being. I’ll keep an eye on things, and I hope Morocco does manage to get things under control, but I do wonder if they can achieve their tourism goals they way things are currently.

It is a fascinating place on so many levels, and also a complete bargain in terms of the cost of eating and buying anything made locally, and it also offers the most diverse countryside, ranging from absolute desert to lush mountain pastures. If you haven’t been, you should go, but perhaps just the once!