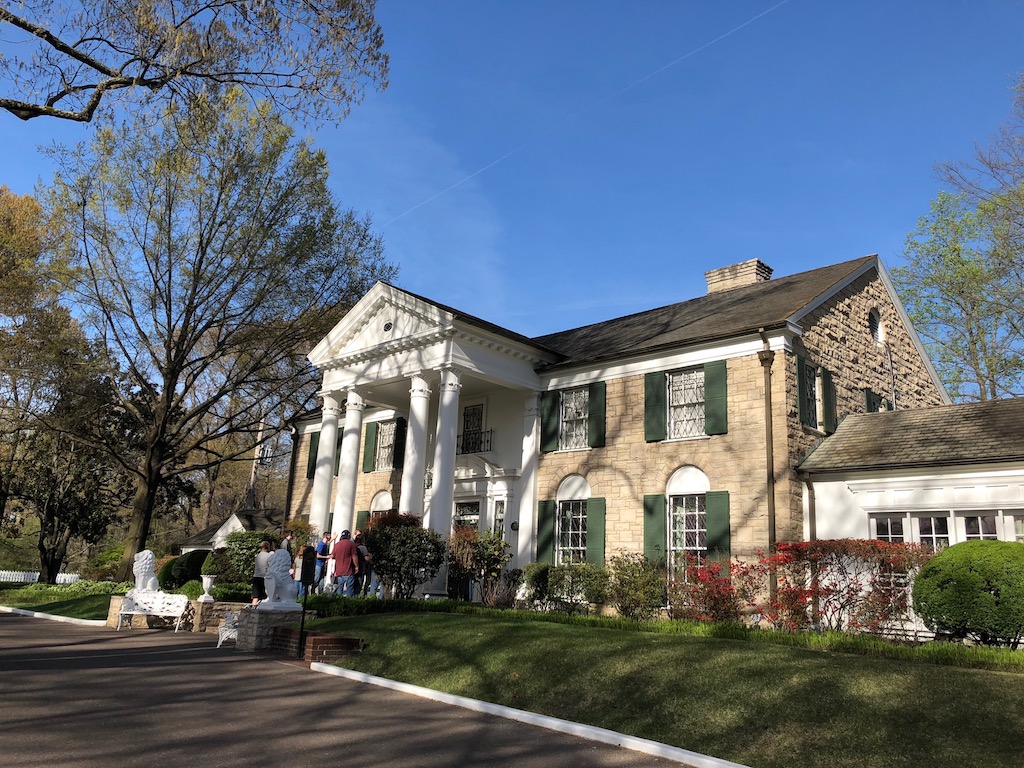 It’s a shorter drive today, 212 miles on the I-40 which took just under 5 hours. The sunny weather is back with us, the temperature has risen to 70°F, and the men have even braved their shorts for this trip. 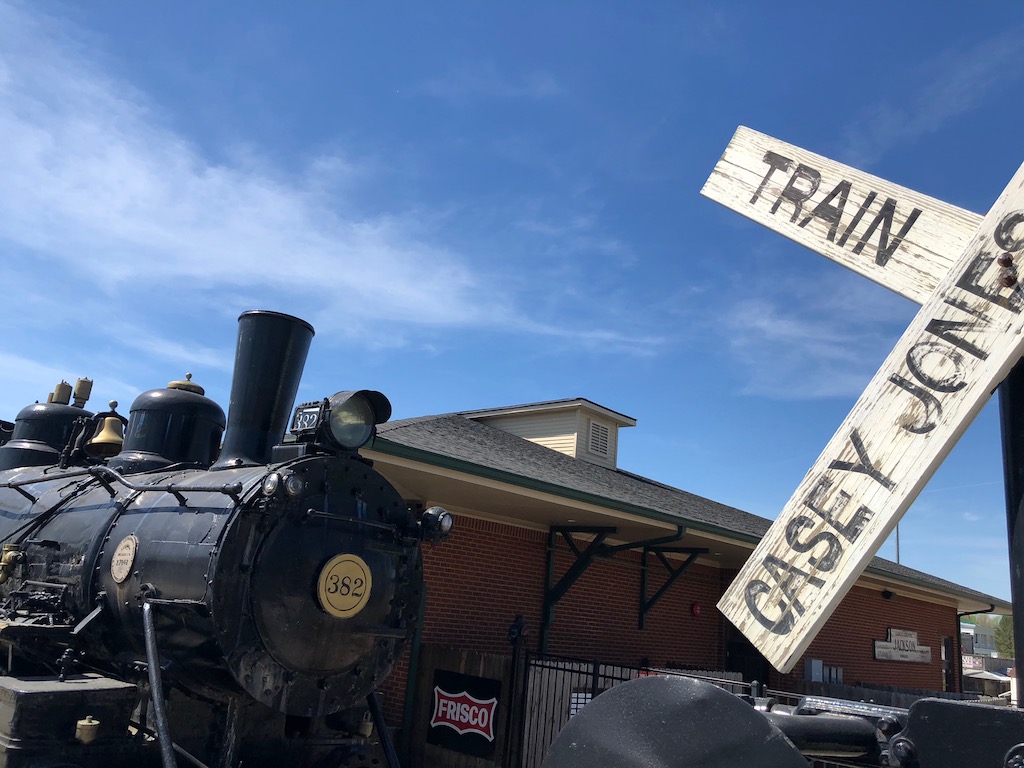 We paused for half an hour at the Casey Jones Village (the best whistle-stop tour Nashville to Memphis), just off junction 80A near Jackson, for a quick stretch of the legs and coffee break. Casey Jones was a railroad engineer who became an internationally known icon due to his heroic last ride on April 30th, 1900, when he saved all the passengers on his train. 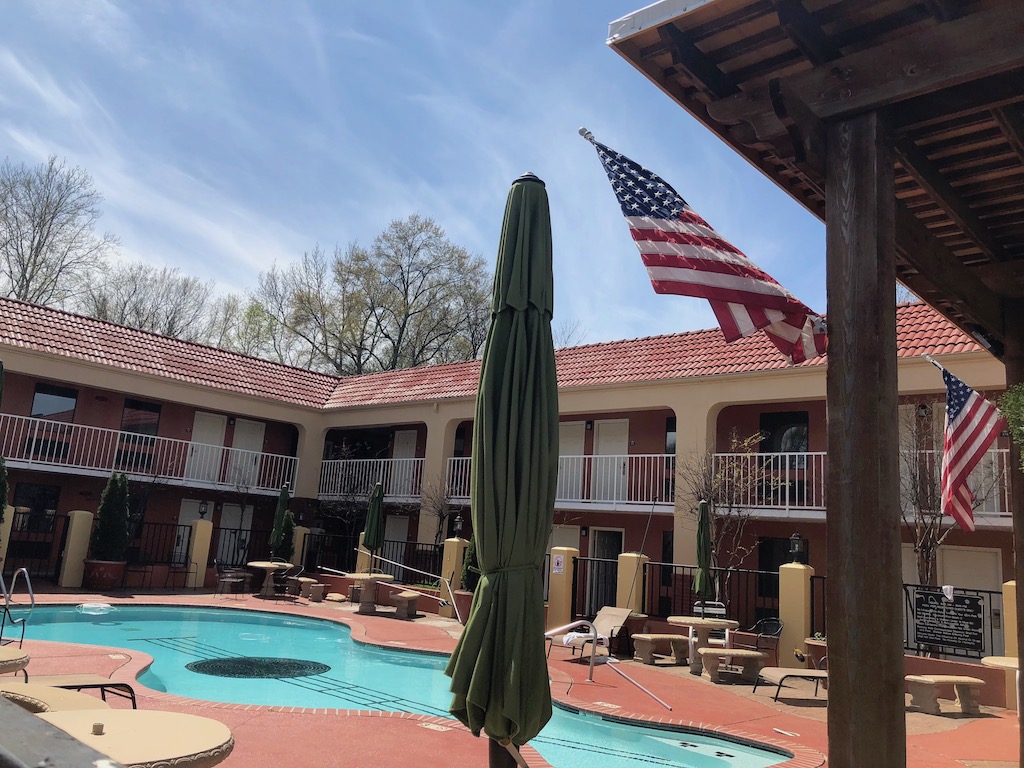 We’re staying at the Days Inn, it is situated literally next door to Graceland, so shortly after checking in we walked around to do the Elvis Experience Tour at 2pm. 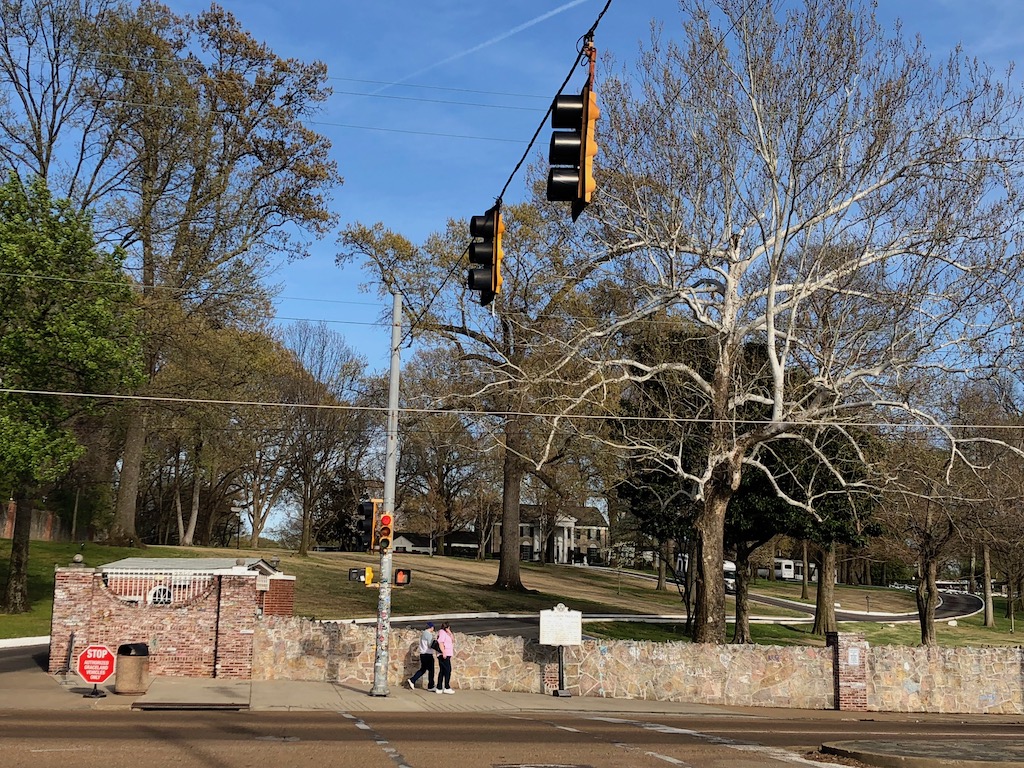 Graceland Mansion is situated across the road from the Elvis Presley’s Memphis visitor attraction (new in March 2017), on Elvis Presley Boulevard. It’s a very understated attraction, you could almost pass it by without realising if it wasn’t for Elvis’s Convair 880 jet named Lisa Marie. 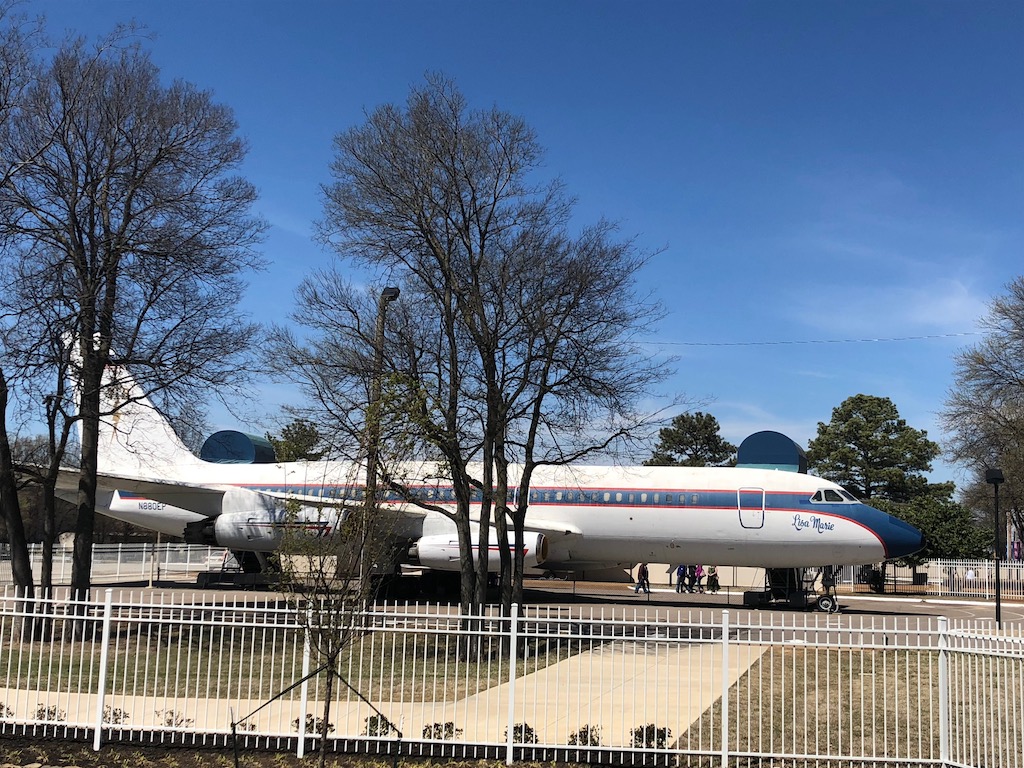 It’s not obvious along the perimeter or entrance as to what visitor’s should do. The first building is a gift shop, if you haven’t booked tickets in advance, then cross the pedestrian bridge and head to the ticket building where there are a few options available. We wanted to see the Graceland Mansion and Presley Motors Automobile Museum so we purchased the Elvis Experience Tour at $59 each. The cheapest option is just the Mansion at $39 (online) or Graceland Mansion and planes at $44.75 (ticket office). NB. there is a booking fee on top at the attraction.

We were informed that our bus tour to the Graceland Mansion would be at 3pm, so we entered the Elvis Presley’s Memphis area to browse the vehicles at the Automobile Museum first. We picked different cars that we’d want to own out of the collection, for me the the MG was in stunning condition and the Stutz Blackhawk was Mike’s choice.

It was time to make our way over to Graceland Mansion, there is a short film show, then headsets and mini iPads are handed out in the bus queue, before we boarded and crossed over the boulevard to Elvis’s house. We were greeted on the doorstep before being invited inside, the tour is taken at your leisure, photos are encouraged, but not with flash and no video recording is allowed. 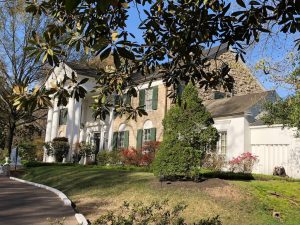 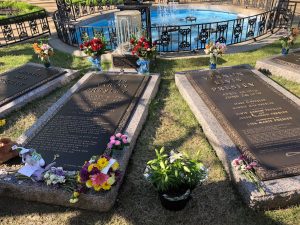 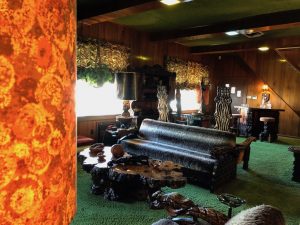 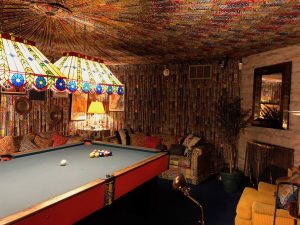 We enjoyed listening to the tour, it was fascinating to hear about the family man, rather than the legend. The upstairs of Graceland Mansion has been kept private, this was Elvis’s own space, and not somewhere his visitors would be entertained, even when alive. Lisa Marie explains that her dad would be fully dressed and prepared to receive his public, when he walked down the stairs. The living room has a 15 foot sofa which was custom made for this space, along with the coffee table. We learned that the kitchen was the centre point of the house, with food available at all times. We particularly liked the Jungle Room with it’s Hawaiian theme including a waterfall and carved wooden furniture. Plus the upholstered Pool Room with 300 yards of pleated fabric lining the walls and ceiling is worthy of a mention, it took 3 men, 10 days to fit it. Although named as a mansion, what became apparent during our tour is that Elvis was a family man at heart, the house isn’t huge, it’s clearly visible from the road and has neighbours. The Meditation Garden is a quiet place for reflection, there’s no special emphasis on Elvis’s headstone from his grandmother’s or parents who lay in rest alongside him. 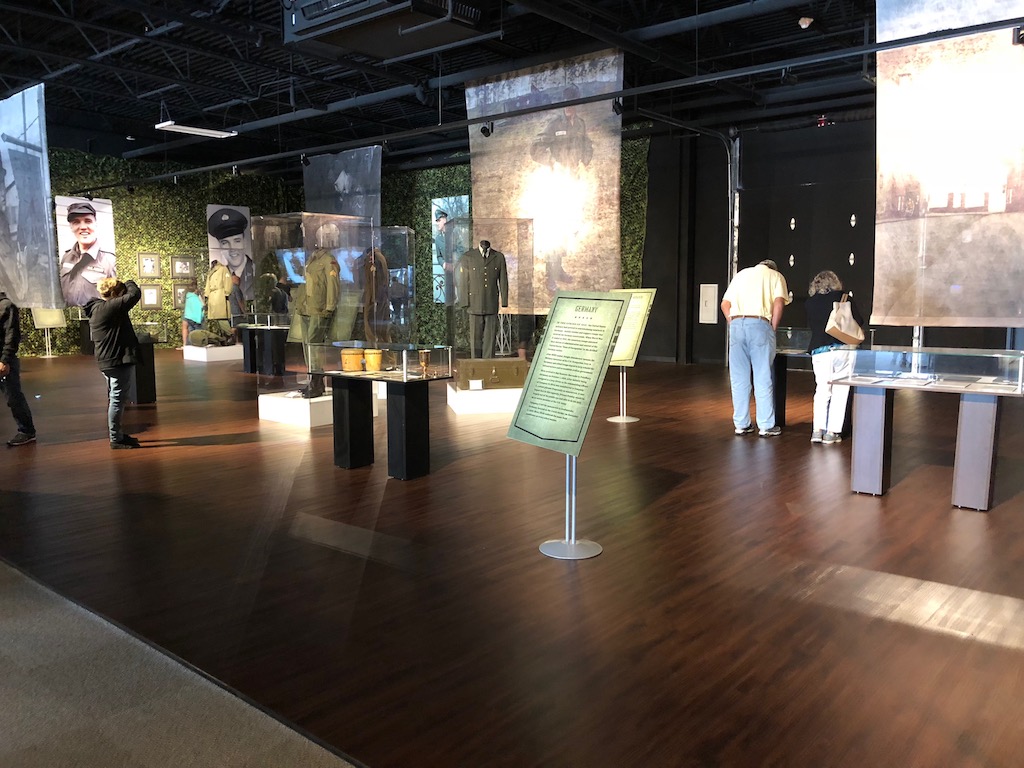 Back across at the Elvis Presley’s Memphis area there is a choice of restaurants, including famous dishes like the fried peanut butter & banana sandwich at Gladys’ Diner.

Memorabilia is not an issue, you’re sure to find something to buy as a souvenir across the variety of shops available. 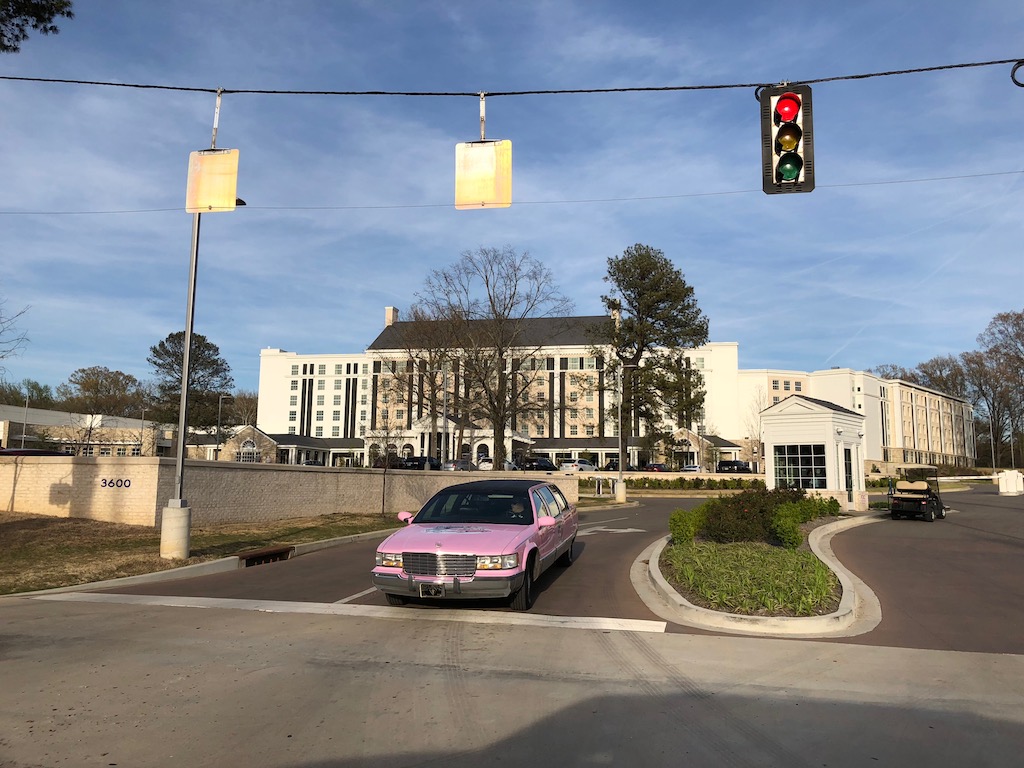 Later we drove past The Guesthouse at Graceland for a few miles downtown in Memphis to experience Beale Street at sunset. We parked for free at the top end of the street, and enjoyed browsing the two sections of Beale Street that were temporarily closed to traffic, to make them pedestrianised for the evening. 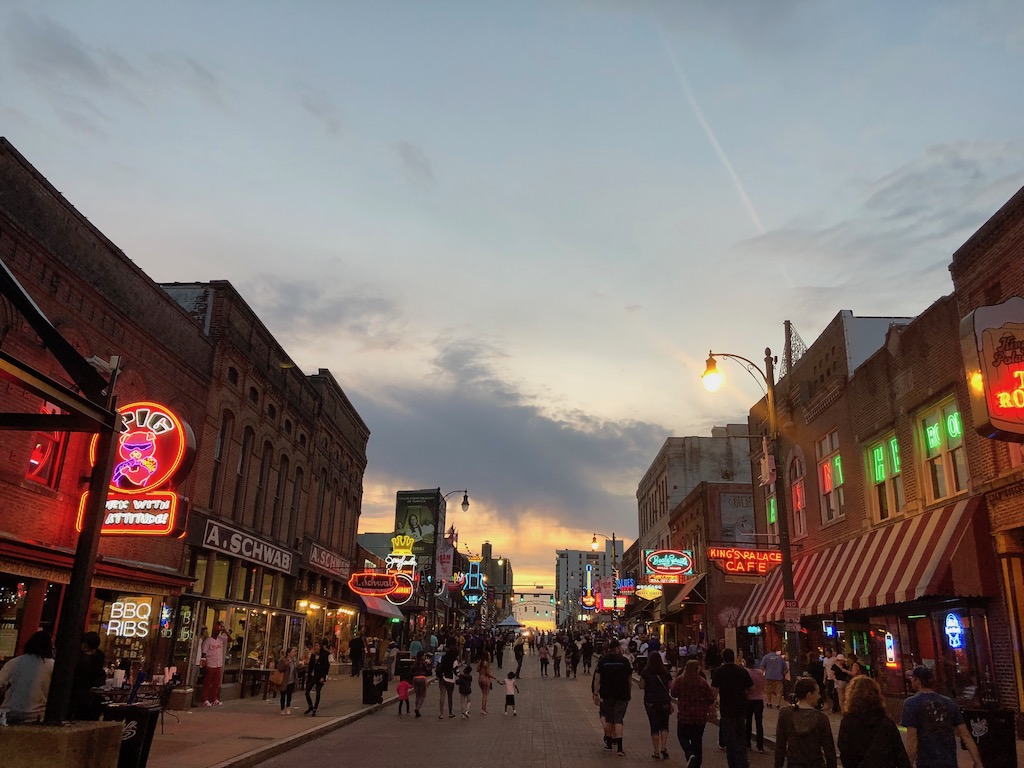 There was a fantastic atmosphere, with tunes belting out from each establishment, many offering interesting cuisine as well as drinks. We avoided the places with queues for inside, we wanted to soak up the ambience, so decided on Silky O’Sullivans which had a patio area with alfresco tables, where they have blues / rock bands performing on weekends. We tried fried dill pickle chips with ranch dressing to dip them in, pulled pork with BBQ sauce, slaw and beans, and some fabulous BBQ shrimp. 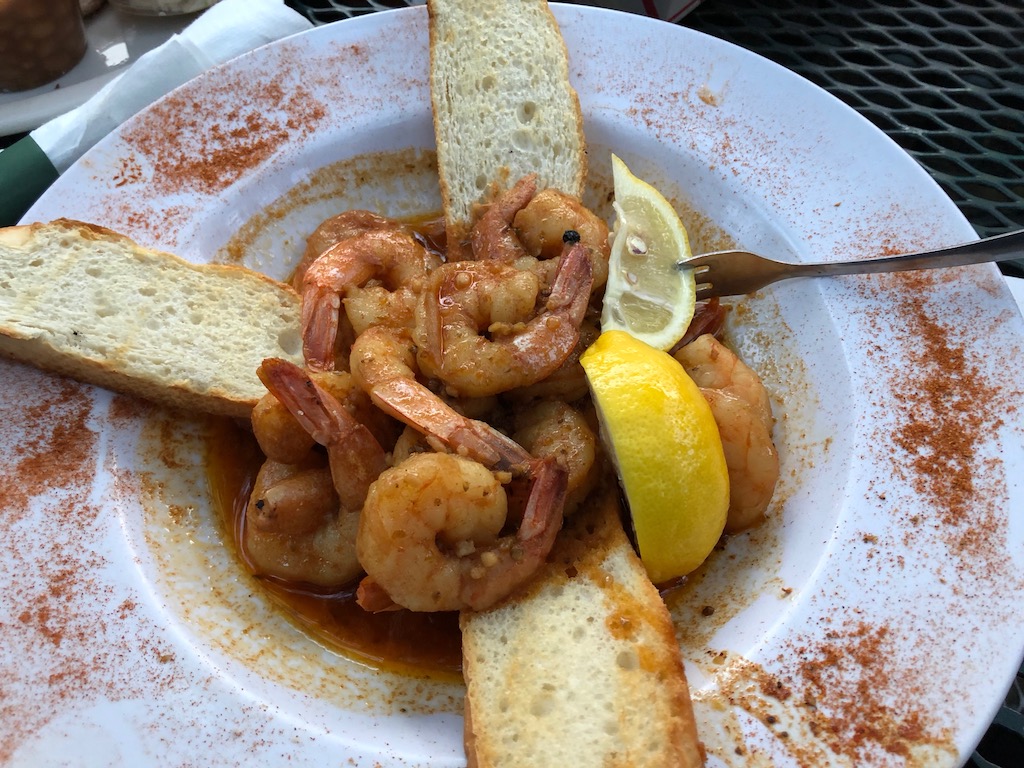 Tomorrow we leave Memphis early for our 466 mile drive along the I-40 W to Oaklahoma City, to get us back onto Route 66.

You can find our photos from this trip on Facebook here: Memphis Photo Album

Memphis is quite a small town and the centre was buzzing when we were on Beale Street in the evening. I don’t know if it’s always like that, or if it was because we were there during spring break, but we loved it!

Graceland was a real surprise. Despite Elvis’ famous ostentation, the house is much smaller than I imagined, and it genuinely felt like a family home, rather than a rock star’s mansion. The foundation has done an amazing job in keeping the house as it was when he lived there, and in displaying memories and private footage showing what it was like in his day. Across the road from the house, there are huge buildings, which show “stuff” from Elvis’ life, organised around the various stages of his life – the early days, his army days, Las Vegas etc. There are just so many interesting things to see and read – one of the best celebrations of a life I have ever seen.

To give you an example of the level of detail – I was able to read his letter to the Army Draft board, asking for his draft date to be delayed so he could complete a movie he was working on. It was obviously written by him, and was so deferential, telling the board that he would come as ordered, but that it would mean the other actors would effectively be out of work with an incomplete movie.

It doesn’t matter if you’re an Elvis fan or not, you should visit Graceland to gain a real insight into one of the 20th century’s genuine icons.