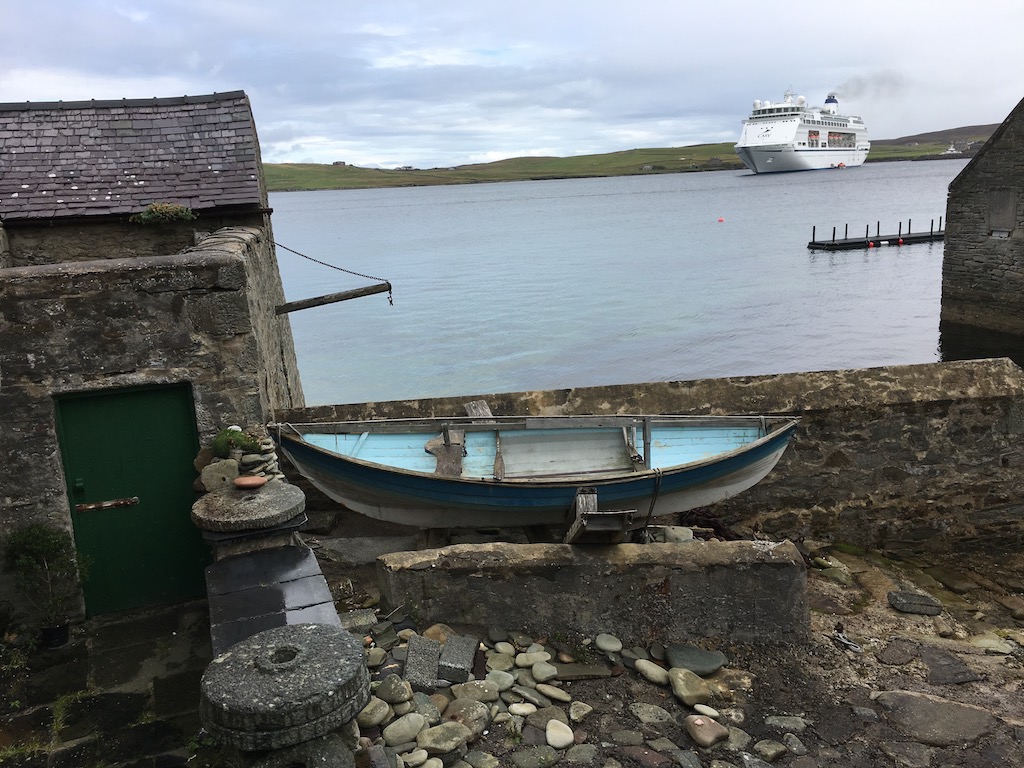 Our third port of call was Lerwick in the Shetland Islands, on day 5 of our Scottish Highlights & Faroes Cruise with Cruise Maritime Voyages.

Lerwick is the capital and county town of the Shetland Islands, with a population of 7,500 residents. Columbus was at anchorage just outside of Lerwick, for this visit we had to use the tender service. We worked for a couple of hours to give the excursion groups chance to get off the ship as they had priority over independent passengers. Our mistake had been in not going earlier to collect our tender ticket, we had been instructed to go once ready to leave, as boat C was just departing, and we were allocated boat L. We sought refuge in the coffee bar at the Atrium, until our group was called. It was interesting going down to deck 3 to board the tender off a platform. The one we were in holds 125 passengers and it was pretty full. It was a short transfer to the Victoria Pier, and there was much excitement when a seal appeared next to the vessel. Our luck with the weather broke just as we stepped foot in Lerwick, the heavens opened and sent the visitors scurrying off in all directions. We donned our raincoats and set off exploring. Our original plan had been to do the circular walk of the Knab lunching at Fjara Cafe Bar on route, as I wanted to catch a glimpse of the seals on the rocks at this location, however we weren’t sure if the rain had set in for the day, or if it would clear. I liked the lodberries, these properties were built into the sea so ships could dock alongside and unload direct to the merchant. There was a small sheltered beach with clear water in this area. Continuing along commercial street we found the home for widows erected by Arthur Anderson, the co-founder of P&O in memory of his wife. We paused at the Anderson High School, it was still drizzling so we decided to stay close to town. There were some interesting shops and intriguing passageways as we walked, Fort Charlotte offered a good view over the harbour and still had canons in situ. The town hall building was impressive even though covered in scaffolding for renovation. We started thinking about lunch, we’d seen a chalkboard for Borges offering fresh seafood, but we hadn’t spotted it. Retracing our steps we realised that this was a pop up restaurant situated in the Lerwick Boating Club. We ordered a starter of Massaman Fishcakes with sweet chilli sauce and cucumber which were stunning. These tasty morsels were packed tightly with fish and beautifully seasoned. I had ordered a small portion of King Scallops for my mains with slaw of the day, accompanied with a Spicy South Indian Tomato Rasam sauce. The delicate flavour of the scallop wasn’t lost, and they were perfectly cooked. Mike had ordered Scottish Mussels for his main course served with white wine, shallots, garlic butter and parsley. Initially disappointed that he had missed out on the fresh crab, we both thoroughly enjoyed our fresh seafood lunch. The weather had cleared up but we weren’t convinced we had enough time left to do the walk round the Knab. Not wanting to miss the last tender boat, we stretched our legs around town again and made our way back to the tender. I still hadn’t found any heather tea, but we did treat ourselves to a handmade whisky & sea salt chocolate or two from Mirrie Dancer chocolatier along the way.

We had also meant to buy some puffin poo & peerie nips, and try Tushkar, an oatmeal stout from the Lerwick Brewery but our time was up.

We’ve uploaded our photos into the album Shetland Islands on our Facebook page.