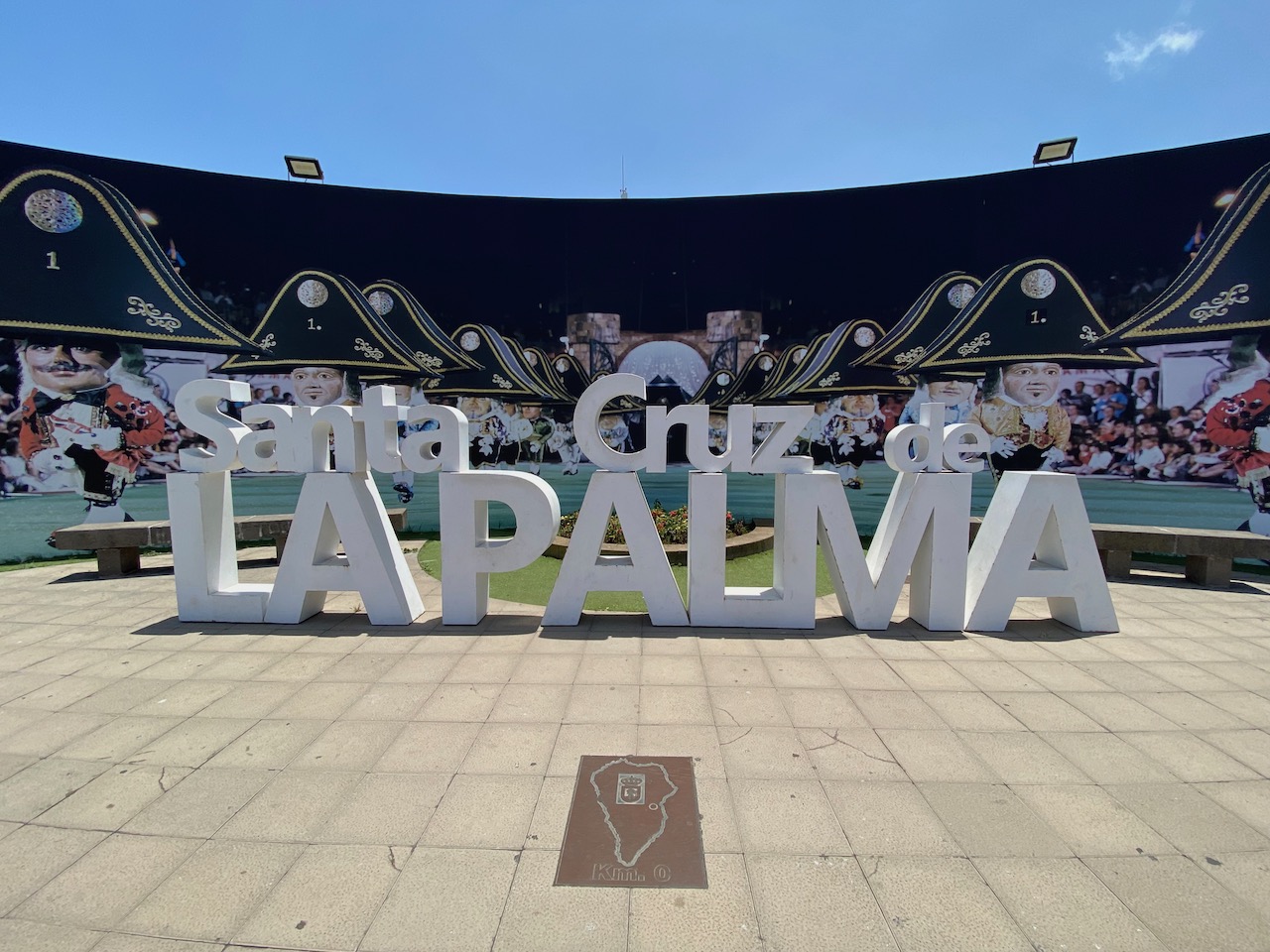 We visited La Palma, known as La Isla Bonita during our 8 Islands Road Trip in July 2021.

Airport code: SPC direct flights are fairly limited from the UK. Inter island connections are available via Gran Canaria (LPA) or Tenerife North (TFN), plus Madrid (MAD) and Barcelona (BCN) from the mainland of Spain.

Both Fred Olsen and Naviera Armas have a ferry service to Santa Cruz from Los Cristianos in Tenerife. Acciona also make a stop in La Palma on their service from the mainland of Spain.

Our plan for Friday 23rd July:

Our plan for Saturday 24th July:

Our accommodation was at the H10 Taburiente Playa for 2 nights. We chose this hotel as it was the closest of the main hotels to the capital, Santa Cruz. In all honesty, it’s not for us and we wouldn’t stay there again. The positives were free parking, coffee making facilities in the room and a good sea view. The negatives were non functioning air conditioning, it circulated air, but didn’t cool the room. There was only one English language TV channel (Sky News), the WiFi upload speed was very slow which hampered efforts to catch up with work, and the dinner buffet choice was poor we couldn’t find anything to tempt us, fortunately the show cooking chef saved us and we dined out on the second night. This isn’t a reflection of H10 hotels in general, just this particular one.

We took the Benchijigua Express, Fred Olsen ferry back to Tenerife. Apparently this is the most modern multi hull ship in the world, the Gold Class lounge is on their upper deck.

We drove straight to the Cascade de los Tilos, this is a short walk along a footpath beside an aqueducts to a waterfall. As we left Santa Cruz de La Palma it was clear blue sky and 27 degrees. There’s a series of tunnels as you climb up from the coast, as we reached Santa Lucia and the Barranco del Agua (9.5km) it was overcast and drizzling! We suddenly realised that we hadn’t packed our waterproof jackets.

We managed to find a parking space, a short distance from the entrance to the footpath, we were soon damp from the fine drizzle falling. The footpath itself was sheltered by the trees and rock face, it’s an easy walk, there’s a section through a tunnel which had some guiding lights. This area provides a fantastic opportunity for some selfies, there’s huge ferns, big boulders and a viewing platform for the waterfall. Our tip is to walk around the base of the viewing area to see the full drop of the waterfall in all it’s glory. I’ve even seen Instagram images of someone bathing under the waterfall if you’re feeling adventurous. We would suggest allowing 30 minutes to complete the total walk, with time to take in your surroundings.

The visitor centre has information boards about the flora and fauna to be found in this location. There are also numerous footpaths leading off into the forest if you wanted a longer walk.

Distance from Santa Cruz de la Palma to Cascada de los Tilos is approx 25km and 35 minutes drive. Entrance to the footpath and visitor centre is free of charge.

For a longer 5km walk that climbs up the bed of El Barranco del Agua, park near the giant Los Tilos bridge and start from La Portada.

In the late 1950’s the Yanes-Herrera family bought some land where bananas and tobacco was being cultivated. The family began to sell their produce and offer tapas to locals, it was a place where cards / dominoes were played and songs sang. In the late 1980´s Luis Morera, an artist from La Palma renovated the restaurant to incorporate the original use and retaining its charm. There was a constant queue waiting for tables at the restaurant, anyone without a prior reservation was shown to the large dining room. Those with could choose from the terrace, or cute individual dining rooms. They cater for a maximum of 436 people, it’s a quirky place and very popular. Meat is cooked on a grill.

La Palma’s capital has a lovely vibe and stunning architecture, we really enjoyed wandering around the cobbled streets, littered with pavement cafes and individual shops. The famous traditional wooden balconies can be found on Avenida Marítima directly on the sea front.

The replica of Christopher Columbus’s ship, Santa María from his voyage to discover America, can be found on Avenida de Las Nieves in the Plaza de La Alameda. Inside of the vessel is a naval museum which can be visited daily from 10:00. A statue of the Dwarf Enanos can be seen between the boat and kiosk. The Danza de Los Enanos (dance of the dwarfs) is a very popular event during the Bajada de La Virgen de Las Nieves held every 5 years, the sails are also raised on the Santa María and canons fired during the celebrations.

The beautiful Kiosko de La Alameda was undergoing renovation during our visit. Arabesque columns, balustrades and a circular staircase are some of the features on this bandstand. The stone walls of the 17th century fortress Castillo de La Virgen can be seen in this area too.

At the Plaza de España you can find the best examples of Renaissance architecture within the Canary Islands, home to the Ayuntamiento (town hall) and parish church El Salvador.

The Museo del Puro Palmero (cigar museum) is situated in Breña Alta. The information was more general about the tobacco industry, with some local information explaining the connection between Cuba and La Palma. They grow tobacco plants and demonstrate how to handmade cigars. Their shop has cigars from 7 producers on the island (there used to be 40). Next door there is a display of crosses, some dressed in gold. When we visited on Saturday morning an agromercado was open in the same area, selling fresh fruit, vegetables and local produce.

Roque de los Muchachos is the highest point on the island at 2426 metres, and where the Astrophysical Observatory of Roque de Los Muchachos (ORM) can be found. We drove up via the LP-4, a winding road that climbs up through forest to emerge above the clouds. There is a small car park right on the top, once you drive past the observatory buildings, luckily a space became available after a few minutes wait. Ravens watched with interest, they were very tame and comfortable around the visitors. There’s no doubting that it’s a fabulous view point, on one side you have the observatory, and if you walk on from the Roque de los Muchachos to the Espigón del Roque mirador you can see the islands of El Hierro and La Gomera.

We drove down via the LP-1 where the pines gave way to vineyards as we descended.

The observatory wasn’t open for guided tours at the time of our visit, due to Covid restrictions.
Website: iac.es/en/observatorios-de-canarias/roque-de-los-muchachos-observatory

Tazacorte has an interesting history. Named after the Guanche king, Tazo who was killed in this location during the Spanish conquest. The whole valley is terraced with banana plantations as far as the eye can see. In 1919 Fyffe bananas was established here. During the 1920’s, 70% of the Tazacorte population worked in the production and export of bananas.

Playa de Tazacorte is one of the main visitor attractions of this area, it’s the largest beach in La Palma and has fine black sand, rather than pebbles. It’s also the only official nudist beach on the island. The setting is very picturesque with brightly coloured umbrellas and azure blue sea against the onyx background.

We were intrigued by the striking design of the harbour wall at the Puerto de Tazacorte. It’s a huge construction, that throws interesting shadows. There’s a large tarmac area which is blocked off to traffic, and a smaller interior wall of similar design that is blocked off to pedestrians. As yet, we haven’t found any more details to explain about this area of the port. We assumed it was some kind of expansion for larger vessels that hasn’t been utilised after construction. There are various boat trips available from the marina including dolphin / whale spotting and fishing.

We didn’t have more time available to further explore Tazacorte on our whistle stop tour of La Palma. I would like to spend more time here on a future visit to have a wander around the town to find the old manor houses and banana museum.

Playa Echentive is the newest beach in La Palma, it was created in 1971 when Montaña Teneguía erupted. This volcanic landscape of La Palma is very reminiscent of Lanzarote.

The Hotel La Palma & Teneguía Princess is located 5km away, amongst the banana plantations on this coast. Close by, is the Fuencaliente lighthouse.

Poris de Candelaria: We wanted to visit this coastal cave with houses built inside, however having started the narrow & steep road down as guided by our sat nav, we decided against it! It looks like there is a wider dirt track access road, so we may try this route on a second visit.

Cascada de Colores: We didn’t know to look out for this coloured waterfall at the Roque de los Muchachos.

Playa Echentive: We visited the beach, but not El Aljibe, a colourful sea pool.

Hiking: There are so many trails in La Palma, I’d like to explore more areas on foot next time.

You can see the full 8 islands road trip playlist on our YouTube channel.