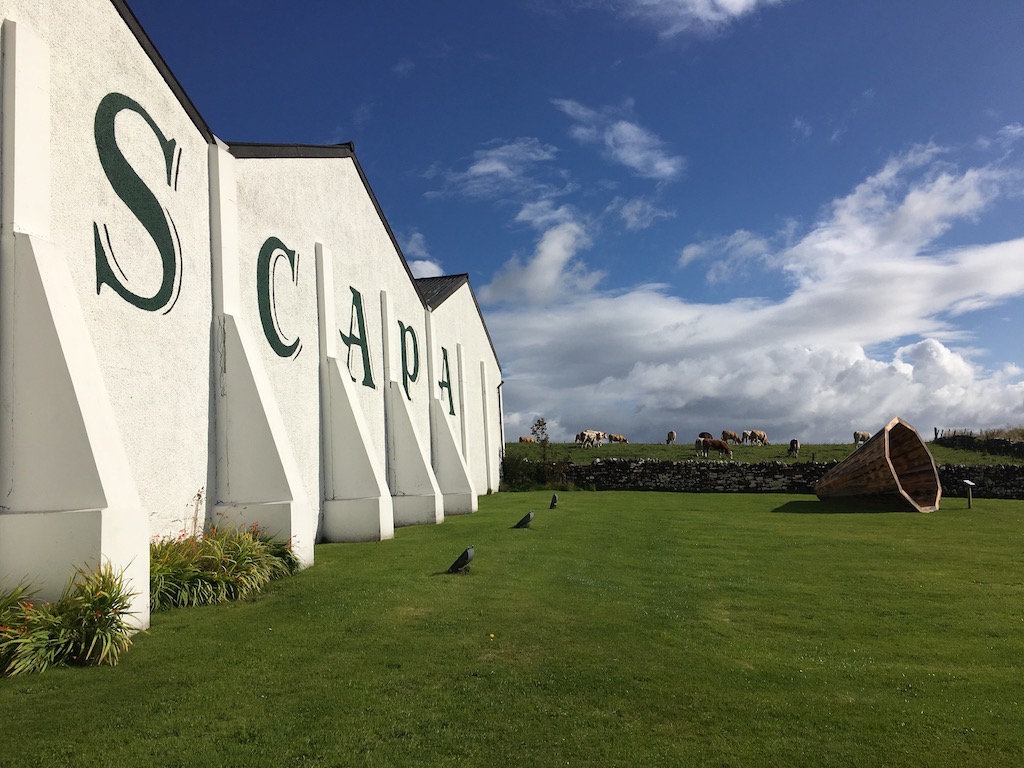 Kirkwall was the first port of call on day 3 of our Scottish Highlights & Faroes Cruise with Cruise Maritime Voyages.

Our ship had docked at the Hatson Pier which is 4km from the city and Royal Burgh of Kirkwall.

We were the last excursion scheduled and our group of 29 were eager to go, which meant our bus was loaded and we could start 15 minutes ahead of the planned time.

Our tour guide for the South Island & Scapa Distillery excursion was Ute, who lived on the island of Sanday. On route, she gave us an insight into the ferries and small planes which work to connect the residents with the Kirkwall mainland, which was similar to the discounted system we have in place for the Canary Islands & Spain. We arrived at the Scapa Distillery where Hamish introduced himself as our guide. Although Hamish had a great Scottish name, he was actually from New Zealand. He proved to be an interesting & knowledgable guide, even though his background was in oil, rather than whisky. We were split into three small groups of 10 and our tour started outside, on the lawn overlooking Scapa Flow. In the distance the green buoy marking the war grave and location of the HMS Royal Oak which was sunk by a German U-47 submarine in 1939. Sadly only 400 sailors survived, approximately 800 died as a result of the attack. The Royal Navy had thought that their naval base at Scapa Flow was impregnable from a U-boat attack, but U-47 found a gap in the sunken ships barrier. Initially disappointed that the anchorage was almost empty, the commander ordered an attack just before 1am on the Royal Oak. Incredibly when one of the first three torpedoes fired hit the Royal Oak’s anchor chain, the crew were unaware they were under attack. His second attempt approximately 20 minutes later struck home, all three torpedoes found their target and the ship sank within 13 minutes. It was thanks to the quick thinking of John Gatt, the skipper of tender Daisy 2, that so many men & boys were rescued. Gatt and his crew worked tirelessly picking up a total of 386 men from the water in the hours that followed. Scapa Distillery is the smaller of two whisky distilleries on the mainland of Kirkwell, we passed the larger premises of Highland Park on the way and the competition is situated within the sight of each other. Scapa whisky has a turbulent history, there are years during the war and the 90’s where they didn’t have production. The aroma in one of the warehouses that we visited was fabulous, they take American Oak barrels previously used for bourbon, and use them once only to produce their single malt. The angel’s share is less than 2% due to the climate and there was around 30 year’s worth of production in storage here. Unfortunately photos are not allowed to be taken inside the building, so I can’t show you how beautifully maintained the traditional machinery was kept. The main secret of the Scapa whisky is their Lomond wash still, now the only one left in existence and the reason why they can’t increase production, which is run round the clock. Other factors to determine the distinctive character of Scapa whisky include the importation of barley, no peat is used to dry the malt and water from the Orquil Springs.

We decided to buy a bottle after the tasting, where we were also presented with a whisky tasting glass memento. The whisky is very smooth, with notes of honey, ginger, citrus and pineapple, we preferred it without a drop of water. Our second stop was the Italian Chapel on Lamb Holm which was created by Italian prisoners in the Second World War. After the Royal Oak disaster orders were given to construct the Churchill Barriers to protect Scapa Flow. The prisoners worked hard to create the barriers and improve their camp conditions, but one thing they lacked was a chapel. In 1943 Domenico Chiocchetti an artistic prisoner was given permission by Major Buckland to create a chapel at one end of two Nissen huts that had been allocated to create a community space for a school and church. The prisoners had a limited supply of materials, and the construction of the barriers were not to be affected by this project, so the Italians pulled together, to cover the labour and inventive at sourcing materials. The chapel at one end of the Nissen huts was such a success that permission was given to beautify the rest of the space. Chiocchetti stayed behind when the rest of the prisoners left the island, as he wanted to finish the font. The chapel was restored by Chiocchetti in 1960 and is now a listed building, that is open to the public as well as holding church services and wedding ceremonies. We drove along the Churchill Barriers, where ship wrecks could still be seen. It was sad to hear of the otters who live here in a fresh water lake, but have to cross the barrier road to hunt for fish in the sea, and risk being run over by the traffic on route. It was also fascinating to see the shift in sand which has almost covered one of the wrecks, with just the tip of the boathouse to be found jutting out from the land. On the way back we caught a glimpse of a quarry, which is now a lobster hatchery. The local fishermen take pregnant females caught to this location, where the baby lobsters are hatched and protected until they reach stage 7, then the juveniles are released back into the sea, when they are less vulnerable to predators.

I wasn’t quick enough with my camera to catch an image of the two fluffy pigs! They were the cutest things, with thick curly white coats and pink pig faces. Apparently these are pets which were imported to Orkney. We spotted lots of other “beasties” grazing by the roadside. Our tour bus stopped at the St Magnus Cathedral, where we decided to explore by ourselves and catch a shuttle bus back to the ship later in the afternoon.

We browsed the shops as we walked down towards the Kirkwall Marina, we went for a pub lunch at Skippers, a bar attached to the Kirkwall Hotel on the front. The Kirkwall Crab Cakes served with a sweet chilli sauce were delicious, crispy on the outside and a moist shredded filling, as opposed to crab flavoured mashed potato. We also shared the Butchers Board with a selection of cold meats including Donaldson’s hickory smoked ham & peppered beef, plus a side of Westray rhubarb & pineapple chutney. Washed down with a pint of Orkney IPA. We took one last walk along Bridge St, Albert St and Broad St stopping in shops of interest. We liked the Brig Larder which had lots of local gastronomy products in stock. Our guide had sold us hard on the standard of the local fudge and ice cream, once we had indulged, we were ready to go back to the ship.

The complimentary shuttle bus service from the cruise ship berth to town is provided by the Orkney Islands Council.

My regret was not buying the Orkney rhubarb gin, and we didn’t find any heather tea to buy.

Other tips I’d researched but not been able to taste was Orkney Buffalo and North Ronaldsay Lamb which is fed on a diet of seaweed.

We’ve uploaded our photos to this Orkney Islands album on our Facebook page.

Other points of interest in Kirkwall: