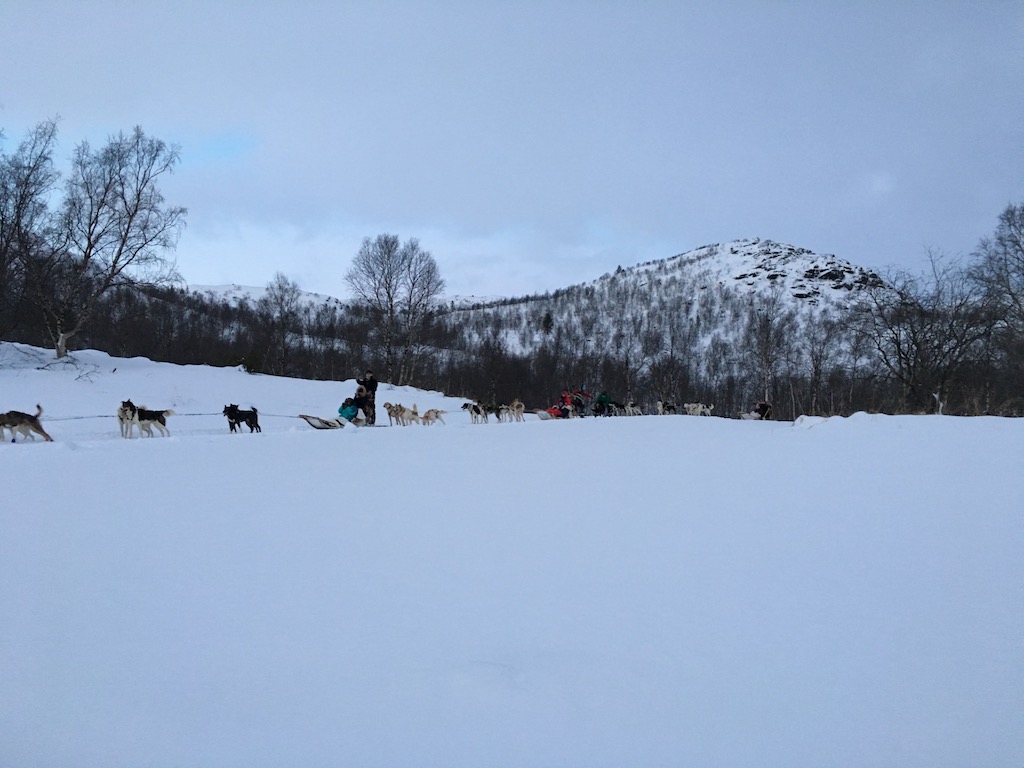 We booked this excursion in advance on our Hurtigruten Arctic Highlight tour of Norway, it’s a good job as it was sold out with a waiting list on arrival at the ship.

Having chatted with a Hurtigruten representative prior to departure, I was convinced that this was the best excursion of our trip, and was looking forward to the experience of sledging with husky dogs and a chance to explore the coolest hotel in the world.

This excursion is available from the 1st of November until the 1st of May each year. It’s a short drive from the port to the Snow Hotel, where 180 excited huskies were waiting to greet us. These dogs are super friendly, they love cuddles almost as much as the chance to run. For anyone without warm winter outdoor clothing, there is a changing room with suits and accessories. We were all given a fleece blanket to place over our knees.

The sledges carry two passengers, we met our musher, Sebastian who was from Belgium and was enjoying his first winter season in Kirkenes. He sat us one behind the other and explained all we had to do was lean occasionally as instructed, to the left or right as required on corners. The dogs were howling, and straining at their leashes to get going, finally when all the sledges were loaded, we were off. It’s so silent when the dogs are running, dashing through the snow on a sleigh is a lovely way to see the countryside. We completed a circuit down by the fjord, which was stunning running along by the water’s edge. Then passing back through the base, we took a path with some hills and turns, cheap propecia us testing the dogs fitness and our understanding of how to negotiate the left and right beds. When we returned we were free to play with the husky puppies and wander around the site which also includes the Gabba Reindeer Park and famous Snow Hotel. We were a week too early for the finished version of the Kirkenes Snow Hotel, which is open from the 20th of December to 1st of May. It was cool wandering around the construction site though, there were huge chunks of ice and piles of snow, with a team of workers hand carving the different rooms. The bar area was impressive, the interior of the snow cave had tree trunks carved into it. The furniture and fixings were made of ice, there were several throne style chairs and a circular bar. I would seriously love to come back and spend a night in one of these snow suites. The hotel also has beautiful pod like cabins set back on the hillside, for more traditional style accommodation. Before we left we had the chance to meet two reindeer who were tempted down from the hill, beyond the viewing platform near the entrance to the hotel. We were given clumps of lichen to feed them, the darker one loved this treat, which they graze on in the summer months. The white reindeer preferred the dry kibble. There was just time to visit the restaurant and gift shop, where we were offered a steaming cup of berry juice from the large pot, warming over the coal fire.

For me this excursion ticked off three of the things to do on my list and had been a very enjoyable morning.