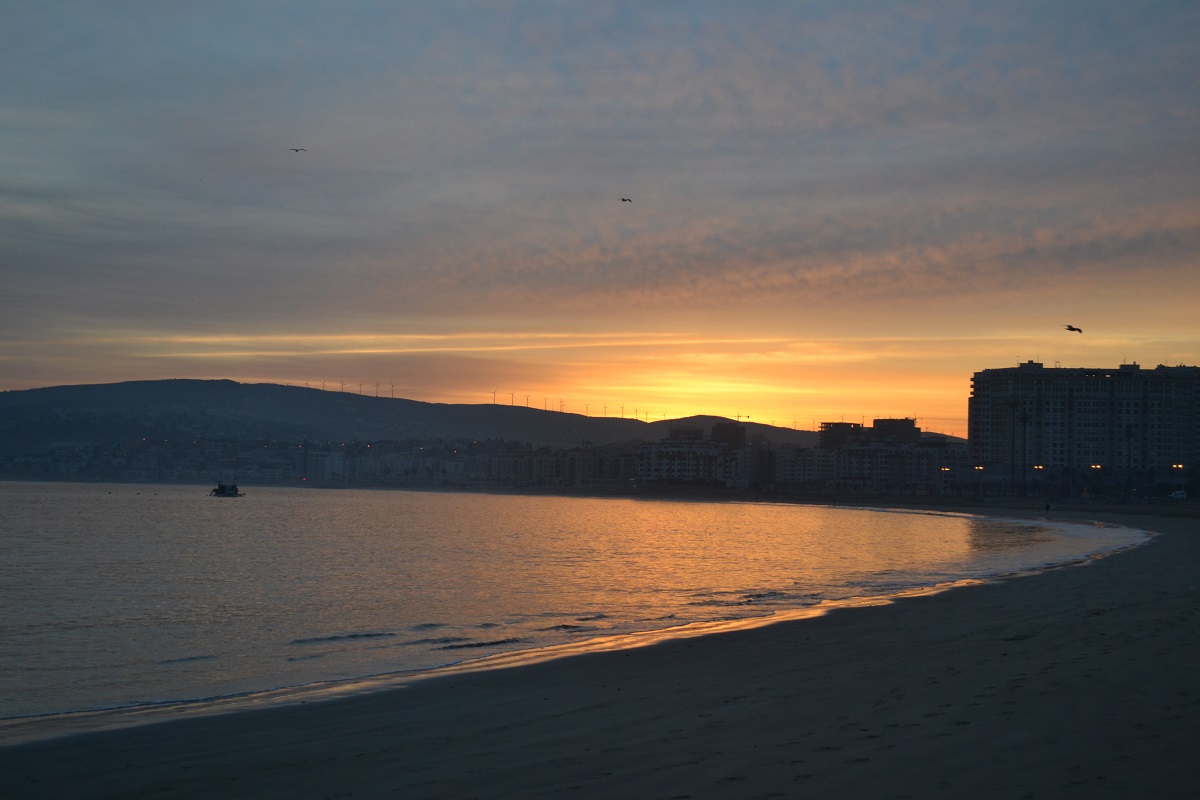 We decided on the 4* Atlas Les Almohades for our stay in Tangier as it overlooks the Bay of Tangier, had WiFi and offered free parking onsite. On our journey from the Tangier airport through the city, we discovered that there is so much construction happening, therefore it wasn’t a surprise to find a building site on the beach directly opposite our hotel, for the new Tanja Marina Bay. For this reason, we were allocated a pool view room at the rear of the hotel, which initially I was disappointed with, however I soon realised this was a benefit due to the constant traffic and building noise along the Avenue Mohammed VI. Our standard room was clean and spacious, there was plenty of space to spread out, including two good sized single beds, with a decent standard of bedding. The bathroom had a bath with shower over, toilet and bidet. Facilities included toiletries, a kettle with tea and coffee, excellent free wifi on each floor and a selection of English language channels on the TV. This hotel has 126 standard rooms and 12 junior suites available. We were visiting in January, we weren’t the only guests but it was quiet with only 1 bar and restaurant open in the lobby area. We saw signs for a Sky Lounge at the top of our hotel and managed to get ourselves stuck on the 7th floor trying to access the 8th floor! Mike posted this update on his Facebook profile about the experience: “So we’re in a nice, and quite posh hotel in Tangier, right on the main beach. But it does have a couple of “quirks…….” At the main entrance, there’s a metal detector, to prevent anyone coming in with weapons. Inevitably, it detects everyone’s mobile phones, so it bleeps alarmingly everytime any person comes into or goes out of the lobby. So it’s completely ignored. You could walk in here with an RPG under your coat, and nobody would notice.

But the funniest thing was that we saw an advert for the “Sky Bar” in the elevator and decided to go there for a pre dinner drink. The poster said it was on the 8th floor. The problem was the elevator only went up to the 7th floor, so we assumed we would have to walk up the last part. We pressed 7, and emerged into a dimly lit corridor. All the rooms on either side were locked, but there was a staircase at the end, so we went up into the darkness, to discover The Sky Bar was very closed, and had obviously been so for some time. Deciding to head back to the lobby bar, we went back to the elevator, to find there was a hole where the call button should have been! There were no stairs down, and no way to summon the lift. Wandering around in the gloom, we found what appeared to be another lift – one of those glass ones that go up and down outside the building. With some trepidation, we pressed the button and the doors opened! It was fitted with a glass floor, and had no lights, so we stepped gingerly into it, and held on to each other. We pressed for the ground floor, and laughed with relief when we arrived at street level, into a big glass atrium. Sadly all the doors at that level were also locked! We could see the street, but there was no way out.

Keeping the panic at bay, we tried a random floor in the glass lift, and eventually found ourselves back in the real world.” We fortified ourselves with a drink at the bar in the lobby, the staff were friendly and gave us a snack of warmed nuts to go with our Casablanca beers. Having checked that the empty restaurant on this floor was our only option for eating in the hotel that evening, we ventured outside to eat at the Lebanese Restaurant Alibaba situated between the hotel and the port.