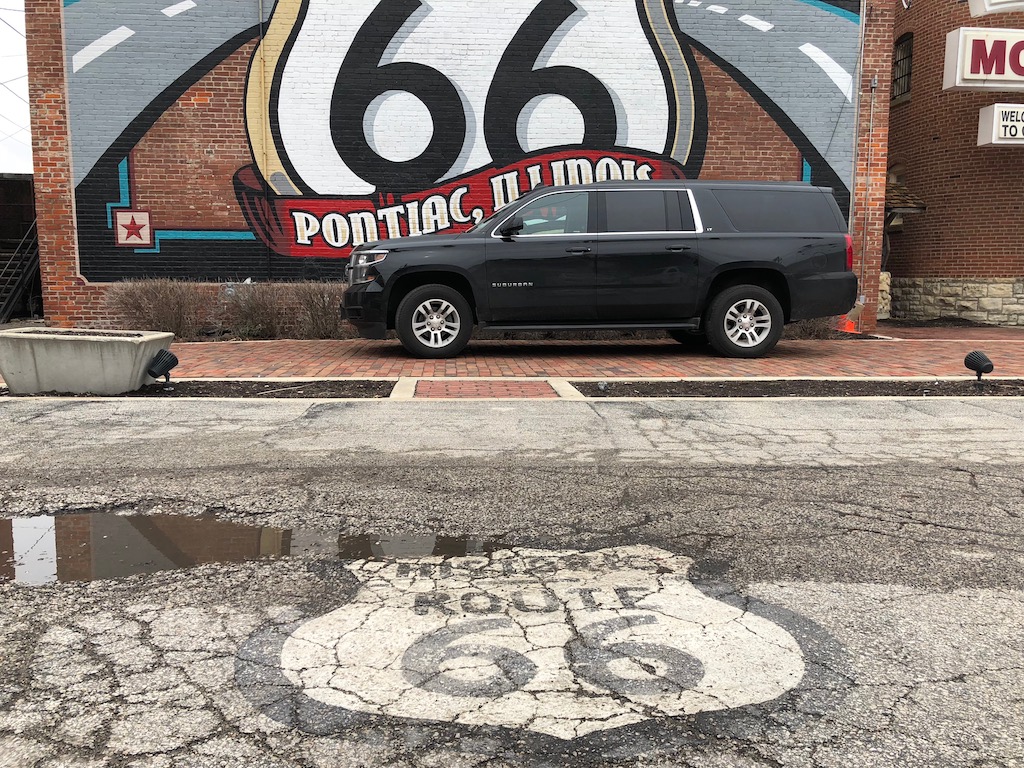 Take the ultimate American road trip, following in the footsteps of the literary heroes of Beat Generation, travelling the breadth of the country from Chicago to Los Angeles on the original Route 66.

Ride the 2400 miles through 3 time zones and 8 states, through a bygone era of old diners, quaint towns and trading posts preserved since the 1950s.

Your journey will take you from verdant farmland through towering rock formations, all the way to the beautiful Pacific Ocean in a completely unforgettable experience.

No matter if you fancy driving a Harley motorcycle or a convertible Mustang, we can help arrange Route 66 to suit your preferences, timescale and budget. 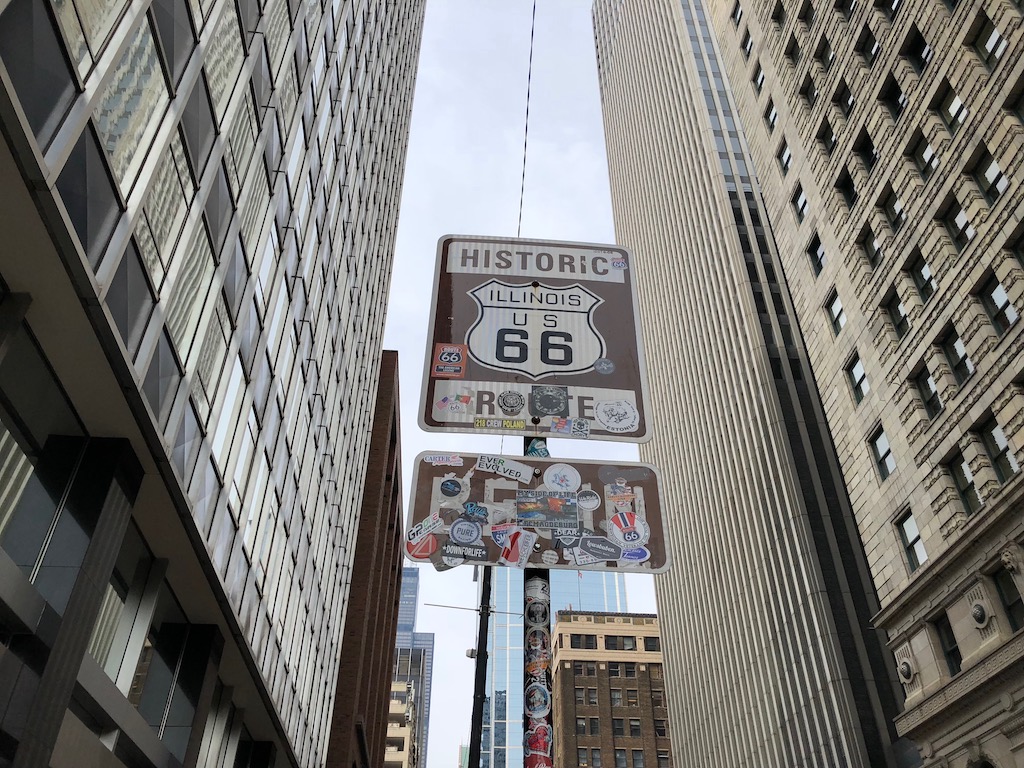 Chicago
Step outside and experience mile after magnificent mile of the Windy City. Stand on the corner of Michigan and Adams, marked as the starting point of Historic Route 66. Enjoy coffee and a big breakfast at Lou Mitchells, a Chicago institution since 1923 and a must for Route 66 travellers. Take a shoreline cruise on Lake Michigan to see the magnificent skyline, stroll the lakefront, peruse the shops, bike the parks, grab a Chicago Dog, or explore the citys incredible sights and architectural treasures including Willis Tower, one of the tallest buildings in North America.

Chicago – St. Louis (480km/ 300miles)
Start your unforgettable journey into the then and now of America along the Historic Route 66. This legendary old road passes through a variety of pure Americana landscapes and takes in some of the country’s biggest, oldest and most peculiar sites along the way. Begin your journey by following the traditional east-to-west path of Route 66 from Chicago to St. Louis, Missouri, cruising through endless cornfields and flat prairies. En route, don’t miss Wilmingtons most photographed citizen, the larger-than-life green Gemini Giant, and Atlantas Bunyan Giant, a 19-foot statue of Paul Bunyan holding a giant hot dog. In Springfield explore the legacy of Abraham Lincoln with a visit to the Lincoln Home National Historic Site. Once in St. Louis, the largest city along Route 66, you can follow in the footsteps of legendary explorers by visiting the historic sites found throughout the city, including the Gateway Arch, the nations tallest monument. 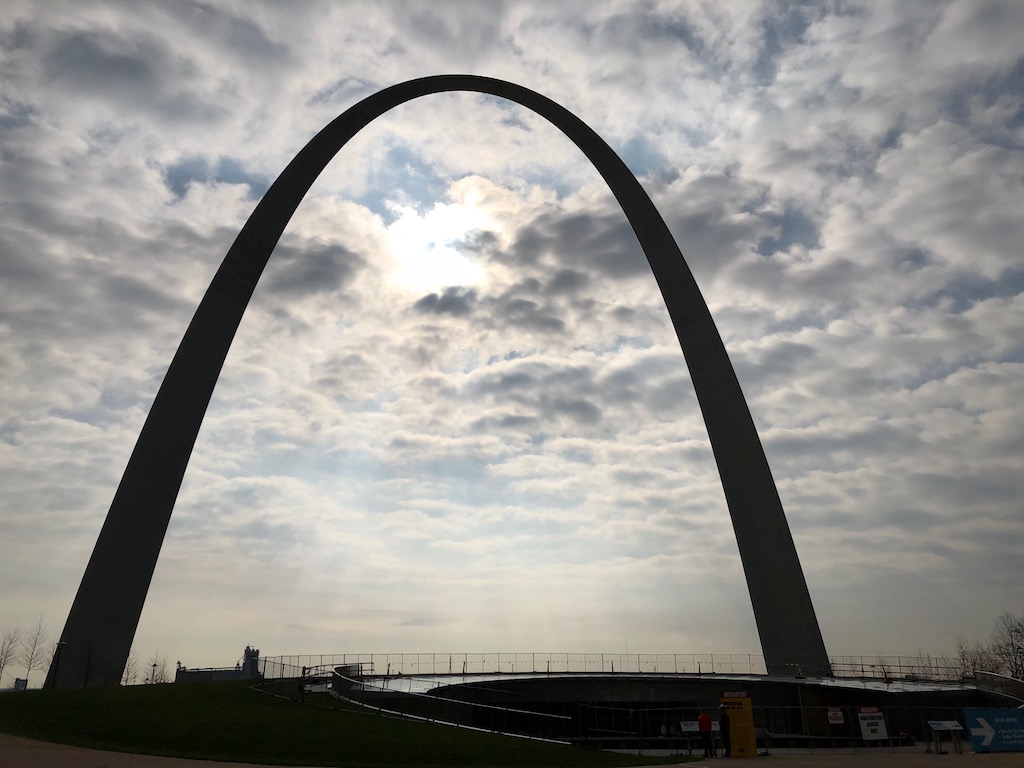 St. Louis – Springfield (340km/ 210miles)
Continue through the Ozarks and Mark Twain National Forest to Springfield, Missouri. Missouri also holds one of the greatest Route 66 attractions: the Meramec Caverns an extensive set of natural limestone caves whose formations and colours are as unique as they are beautiful that date back 400 million years.

Springfield – Oklahoma City (520km/ 310miles)
In the morning, cut through the south-eastern corner of Kansas on your way to Oklahoma City. En route to Oklahoma City, stop to view the beloved 20-foot tall cement Blue Whale in Catoosa, a landmark along Route 66, and the Cyrus Avery Route 66 Memorial Bridge in Tulsa honouring the Father of Route 66s memory and connection to the historic highway. Once in Oklahoma City, the States capital, be sure to check out the old Route 66 motels, gas stations and numerous vintage buildings.

Oklahoma City – Amarillo (420km/ 260miles)
Continue to Amarillo, located in the pancake-flat plains of the Texas Panhandle. This area of Texas was once the buffalo-rich grasslands of the Great Plains, inhabited by bands of Kiowa and Comanche Indians. Stop at the Route 66 Museum in Clinton where you experience 6 decades of Route 66 history. See Shamrocks Tower Station and the U-Drop Inn Café whose towering spire is still a reminder of the booming business it once saw. See the first restored Phillips 66 gas station in McLean and in Groom, the leaning water tower and a 150-foot tall stainless steel cross. Once in Amarillo, be sure to stop at Big Texas Steak Ranch, and if you’re feeling peckish you can attempt their 72oz. steak challenge! 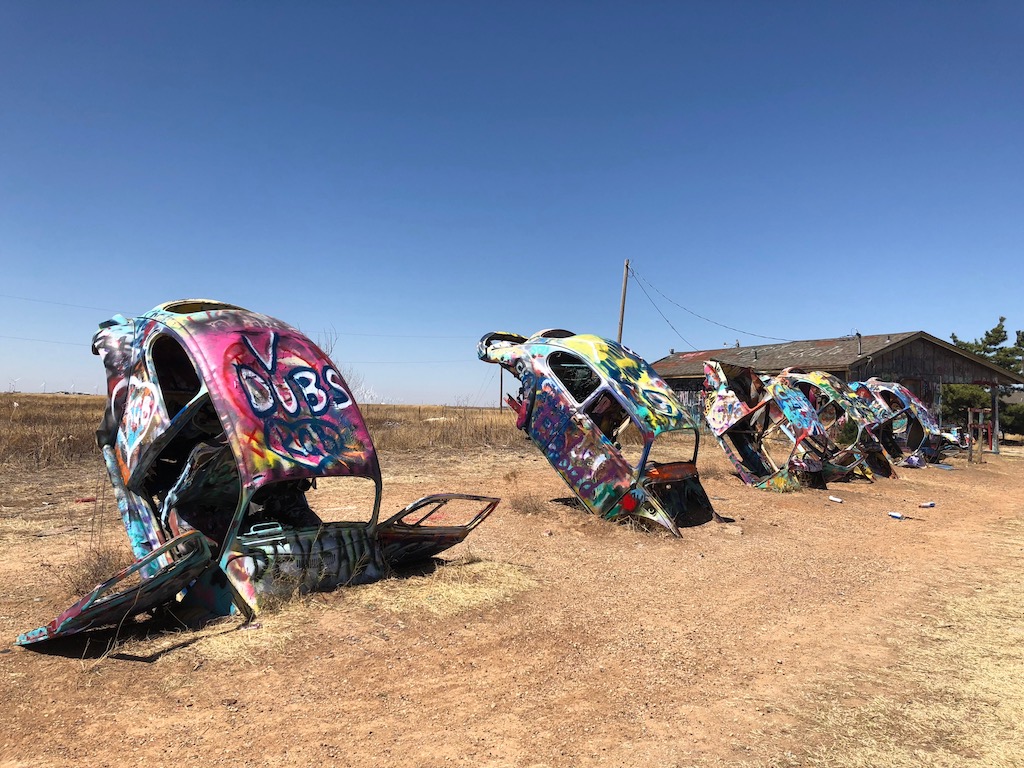 Amarillo – Albuquerque (450km/ 270miles)
Before leaving Amarillo be sure to visit Cadillac Ranch, this unique display of art features a row of ten colourfully painted Cadillac cars buried grille first in the ground. After here follow Route 66 to Albuquerque, New Mexico for a great taste of the Land of Enchantment. Next day spend the day exploring Downtown Albuquerque’s Central Avenue, a treasure trove of Route 66 landmarks. Historic Old Town offers a taste of New Mexicos Spanish colonial past and the regions Native American cultures.

Albuquerque – Holbrook (420km/ 260miles)
The state of Arizona welcomes Route 66 travellers with an overwhelming display of trading posts. View huge concrete tepees that stand at the foot of brilliant red-rock mesas en route to Petrified Forest National Park. Catch a sunset over the Painted Desert from the parks Kachina Point before heading to Holbrook.

Holbrook – Grand Canyon (290km/ 180miles)
Continue to Meteor City and pass through Flagstaff and Williams en route to Grand Canyon National Park, a natural wonder that you simply have to see to believe. Spend the day discovering the distinct South Rim of the Canyon. Stop at one of the numerous overlooks, walk part of the Rim Trail or along the historic Hermit Road. Visit a Photo Hot Spot, or climb to the top of a stone Watchtower for panoramic views. 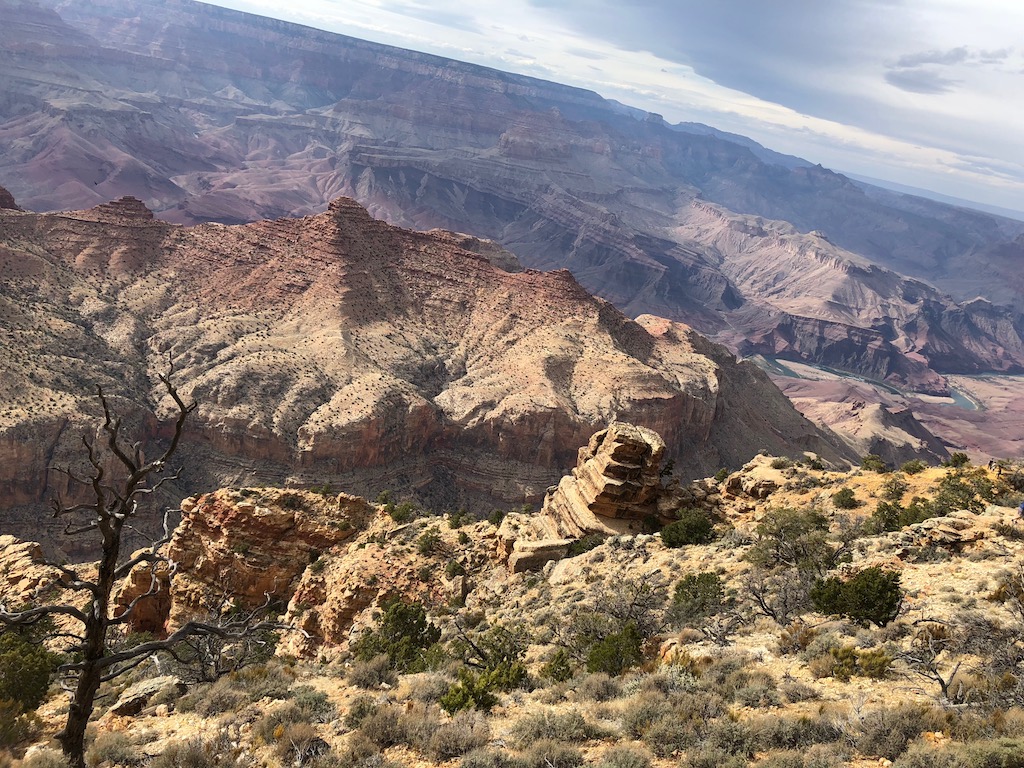 Grand Canyon – Las Vegas (480km/ 300miles)
Leave the town of Williams and the Grand Canyon behind as you make your way to Seligman, the first stop heading west on the longest uninterrupted stretch of Route 66. Continue through Kingman whose old Route 66 cafés and motels still flourish, to one of Arizonas hidden treasures, Hoover Dam. Continue to Las Vegas, Nevada, a city that needs no introduction. Next day, enjoy a full day in Las Vegas. Walk the famous Strip, place a bet at one of the many casinos, dine at world-class restaurants, catch the latest must-see show, shop designer boutiques, ride a rollercoaster, or relax by the hotel pool.

Las Vegas – Los Angeles (470km/ 290 miles)
In the morning, set out through the Mojave Desert for Calico Ghost Town, Californias authentic silver mining town and one of the few original mining camps of the Old West. Continue through Pasadena, Los Angeles, West Hollywood and Beverly Hills to Santa Monica for a true Hollywood ending to your cross-country journey. Park and venture the last few blocks on foot to view the End of the Trail sign on Santa Monica’s Pier.

Use your free time to explore the area stroll along the beaches of Santa Monica or go to one of the many themes parks within easy driving distance. 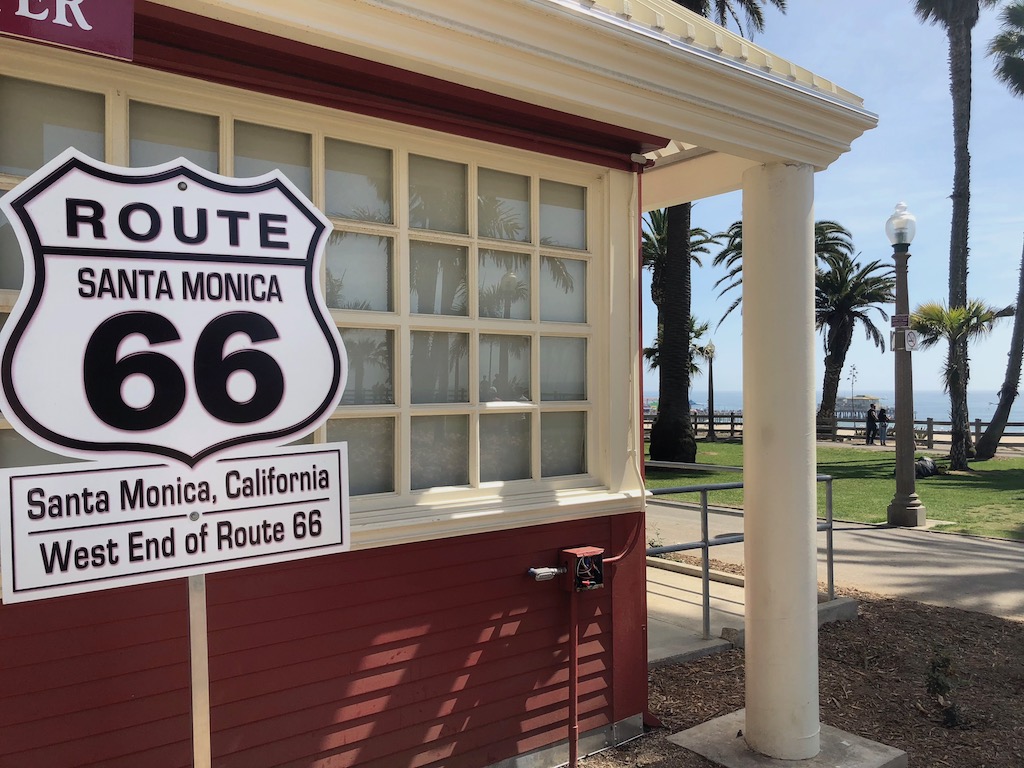 You can do a Route 66 self drive tour in as little as 7 days with less stops, the recommended time is 12-14 days, but it really depends what you want to see and do along the way. The beauty of these self drive tours is that they can be tailored to your personal preferences.

We’ve driven from Chicago to Los Angeles on Route 66, then extended our trip to take in the Pacific Coast Highway to San Francisco. Get in touch about your plans to drive the iconic Route 66.