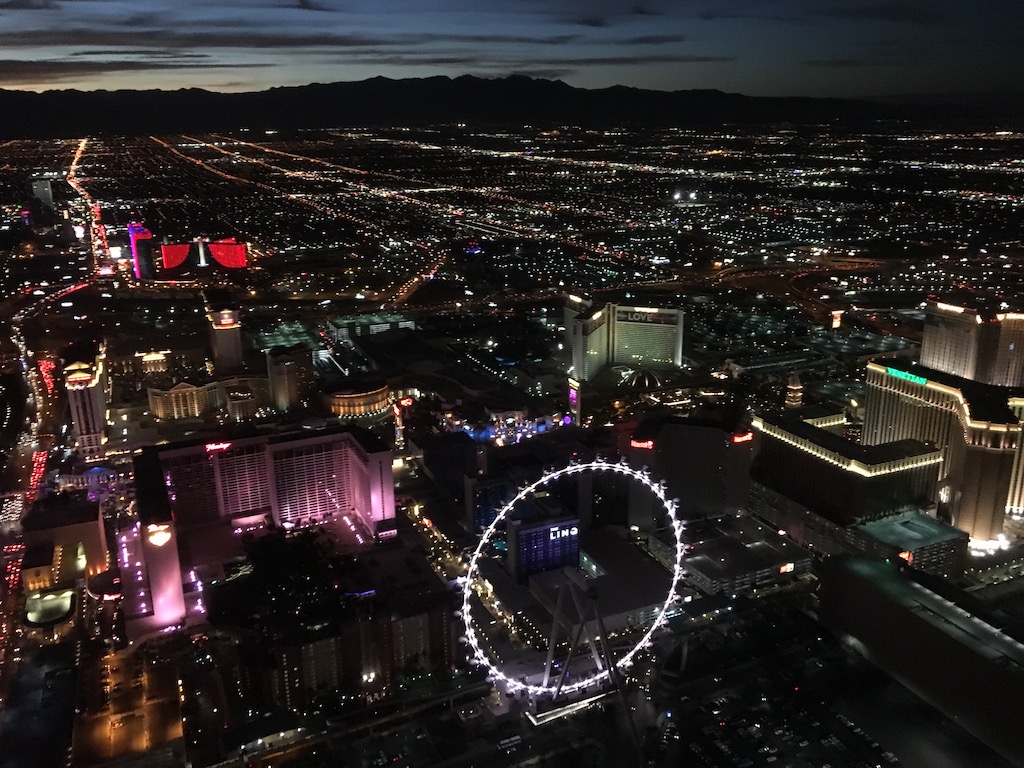 It might only be a 12-15 minute flight experience, but the helicopter tour of the Las Vegas strip by night was fabulous.

We booked it on personal recommendations from friends and agents who mentioned it was the highlight of their holiday.

There are a few companies offering this excursion including Papillon Grand Canyon Helicopters, Maverick Helicopters and Sundance Helicopters. We booked the excursion without limousine transfers, however every taxi ride we took to various points in Vegas during our stay was around $20-30 each way so factor that cost in when booking if you’re not driving a hire car. When reconfirming your helicopter ride, you have to give the approximate weight of each passenger, and on arrival they weigh you – don’t worry this isn’t flashed up to the waiting area, only the receptionist knows your actual weight!

We were offered a glass of bubbly and watched a short safety briefing before taking our transfer airside to our assigned helicopter. Papillon offer one night tour, timed to depart as the sun is setting and the Las Vegas illuminations come to life. There were four helicopters available, each carrying up to 6 passengers. The seats are allocated according to weight distribution, you can pay an upgrade of to sit in the front but it’s not guaranteed, it does depend on the size of all the passengers on that flight.

During the safety briefing we were advised that mobile devices were not allowed during the flight, however at the end of the video a member of staff contradicted that and said as long as the flash was turned off and in airplane mode, photos and video cheap propecia in australia could be taken during the flight. Each group have an official photo taken with their pilot by the helicopter, which is available for purchase at the end of the excursion.

Las Vegas is awesome from the air, I loved spotting the individual hotels starting with the Luxor, Mandalay Bay and Excalibur close to the airport. We flew along the right hand side from South to North, the Paris and Bellagio are easy to spot in the centre, and we passed the distinctive High Roller before circling around the Stratosphere, which is the tallest hotel in the resort before flying back on the left hand side of the strip.

The pilot gave a brief commentary during the flight, we could ask him questions and communicate with each other using noise cancelling headsets and microphones. I enjoyed the perspective of viewing Las Vegas from above, you really get an impression of the size and stature of the individual hotels. It was my first time in a helicopter, the flight was really smooth and as we landed we were quite tempted to book the longer daytime excursion to the Grand Canyon. The helicopter hay day has passed, these Grand Canyon helicopter companies are fighting to retain the rights to fly in the national park area. Prior to 1987 there were 36 air tour operators flying 52 routes over the Grand Canyon, today there are just 8 companies and 9 routes available due to flight free zones and restrictions.

The helicopter tour of the Las Vegas strip costs from $99 to $124 per person depending on the operator, time of day and transfers.