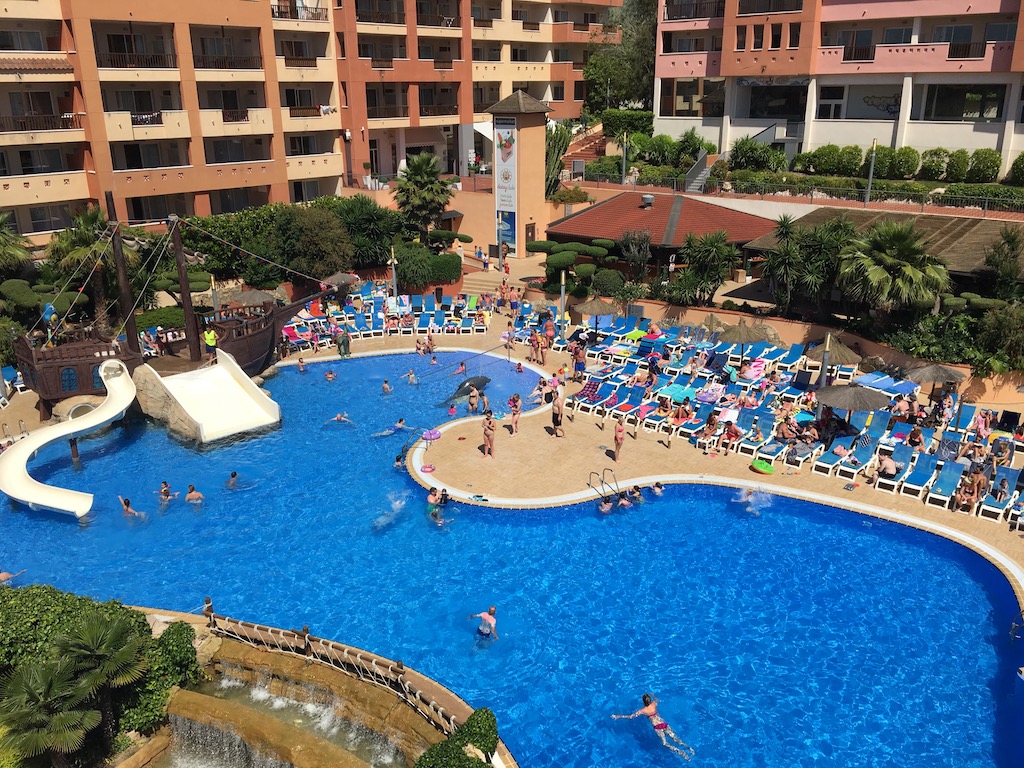 We chose to stay at the 4* H10 Mediterranean Village hotel in Cap Salou for 2 nights as part of our short break in Barcelona.

There are a few H10 hotels in the area, but this one had good family reviews and an interesting pirate boat themed pool for our granddaughter to play in.

We only needed bed & breakfast accommodation, but we upgraded to half board, as the extra cost was just £30 for the 5 of us.

We checked in after visiting Ferrari Land, so it was late afternoon and we were able to go straight to our rooms. Ours had an adapted bathroom and a large balcony, however the air conditioning wasn’t working. We alerted reception, maintenance tried to solve the problem and some hours later, our request to swap rooms was accepted. Thankfully our second room, a few doors along was lovely and cool. On the first night we ate in the hotel, we were able to be seated together as a family of 5 and there was a varied selection of hot and cold food available to suit everyone. Children have a special section at a lower level with kids favourite foods on offer. For the adults there was a good salad section, hot food buffet and show cooking for freshly cooked fish and meat on the plancha.

After dinner we went for a stroll to discover the local area, it’s pretty quiet to be honest, there’s a path down to a beach in a small cove called Cala Penya Tallada just across the road. There were two small supermarkets and a tourist bar restaurant. We followed the coastal footpath to the right and emerged to find Casa Paco where we stopped for refreshments before heading back to our hotel. After a good night’s sleep we ventured downstairs for breakfast. Les Oliveres is the buffet restaurant, set out with a central food station there was everything you could want for breakfast, from fresh fruit, cereals, cold meat & cheeses, hot buffet, pastries and an egg chef. Drinks stations with juices, tea & coffee are at either end of the restaurant.

We were just leaving our room for a day out at PortAventura when we noticed crowds gathering around the swimming pool….. it was almost time for the towel race! We delayed our departure to watch, individuals were creeping forward under the rope, to be sent back by a member of staff. On the dot of 10am, the ropes were lifted and the guests ran madly round the sun beds throwing towels to reserve those in the best locations. It was amusing to watch, but then as we watched most of them drifted away we wondered how long those beds would remain empty, save for a towel during the day. The H10 Mediterranean Village has 199 rooms split into double rooms and junior suites, plus 173 apartments. The Daisy Club is popular with familes, they have 3 children’s clubs starting with the Miniclub 4-8 years old, Juniorclub 9-12 years and Teenclub from 13 years upwards.

We didn’t get to relax by the pool or on the roof terrace with jacuzzi during our stay, when we weren’t out exploring, we were catching up with work in our room or at the lobby bar. The WiFi coverage and speed was excellent. The hotel also has a gym, indoor pool, sauna and Turkish baths which we would have made use of with more time. On our second evening we decided to drive into Salou to eat out, and had a memorable meal, which included our waiter pouring wine over me! Plus when we returned to our car, we drove off and turned around to find that the car that had been parked behind us hadn’t put their handbrake on. The image of pedestrians holding the car back from rolling down the middle of the road, still gives me a giggle today.

This hotel is situated 7KM from PortAventura. For us it was a good base as we had a car, if you like to walk out and eat in local restaurants, you may want to consider a different location.