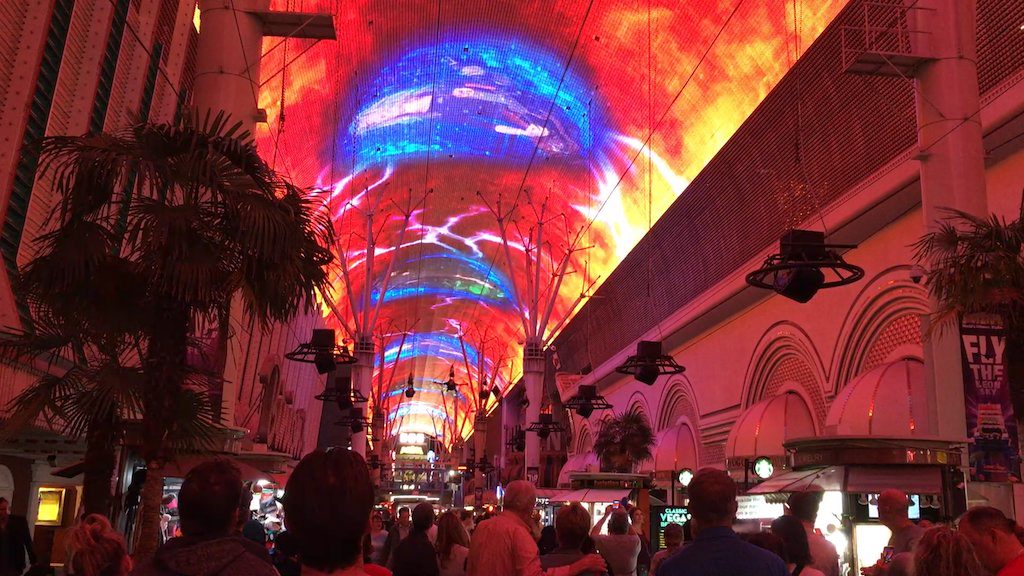 It’s definitely worth heading downtown to experience Fremont Street during a visit to Las Vegas, and one best enjoyed after dusk when the ceiling is illuminated with 12.5 million lights and 550000 watts of sound. We really enjoyed the diversity of this area for nightlife, shopping and dining.

We visited twice during our week. The first time we went at night, our taxi dropped us off outside the Golden Nugget. We noticed most revellers were drinking from plastic cups from one of the street vendors, so you could wander and enjoy the different stalls and street performers (working for tips). There are two stage areas which featured live rock bands and you can’t help but notice the superman flyers zooming past above you on the Slotzilla ride. Make sure you visit on the hour for one of the Viva Vision light shows which start as dusk and end at midnight. Once we had walked the length of the Fremont Street Experience, we decided we were starving. Ignoring the Heart Attack Grill where anyone weighing more than 350 lbs eats free, we crossed over the street and continued into Fremont East where there are gastropubs and other cool eateries. On this occasion we decided to dine at Siegel’s 1941 in El Cortez Hotel and Casino, we loved the black and white photos and history of this place. This hotel was Bugsy’s first investment in Nevada back in 1941, it is the longest continuously operating hotel in Las Vegas. Bugsy only owned it for 4 years, his next project was the Flamingo Hotel & Casino, the construction ran $5 million over budget. We ordered a Bugsy’s burger and pastrami sandwich with fries. The food really hit the spot, and even better it had been our cheapest meal so far. It’s noticeably cheaper to dine downtown, so if you’re doing Vegas on a budget I’d recommend staying in one of the Fremont hotels and travelling up to the strip, rather than the other way round. On our second visit to Fremont street we walked from the main strip. It was our last day, we had checked out of our hotel, eaten a buffet brunch at the Wynn and decided to walk it off, the distance is just over 5km / 3 miles. We popped into the Circus Circus hotel to use their facilities which coincided with the start of a free circus show. There were a lot of families with young children passing through this casino which we hadn’t witnessed during visits to other hotels, the difference being that they have an Adventuredome with 5 acres of indoor rides, and the Midway a funfair with stalls surrounding the circus stage. We watched a clown and trapeze troupe performing, before continuing with our walk. We didn’t stop at the Stratosphere Tower, although this had been on my list of things to do. There’s a revolving restaurant called The Top of the World, a 360 degree observation deck of Las Vegas – which is the tallest freestanding tower in the States at 1149 feet, and some adrenalin fuelled rides including Big Shot, Insanity and X-Scream. We did spot some sky jumpers leaping off the top! The Las Vegas Boulevard area between the Stratosphere and Fremont is quite rough. We walked this stretch without any incident however I was slightly nervous when approaching groups of people or those sleeping rough. I’m not sure I would choose to walk again, I wanted to see the wedding chapels along the way. We arrived in Fremont when it was still daylight, our mission was to find the World’s Largest Golden Nugget which is The Hand of Faith Nugget on display in The Golden Nugget hotel. This golden nugget is the biggest in existence and found with a metal detector in Australia, Kevin Hillier sold the 61 pound nugget to the hotel for over a million dollars. We wandered along Freemont and into the Downtown Container Park, this shopping centre is made from shipping containers, around a central kids play area and full of boutique shops and hip food outlets. It was almost time to head to the airport for our flight home, our last stop was at Evel Pie, which was advertising a happy hour of $2 beers from 2-6pm. This place only opened in October 2016, but you’d think it had been there for decades, due to the 1979 pizza shop theme. The interior is packed full of Evel Knievel memorabilia, with pinball machines, and chopper bikes parked in the rack out front. Munching pizza and sipping ice cold American beer was the perfect end to our holiday.