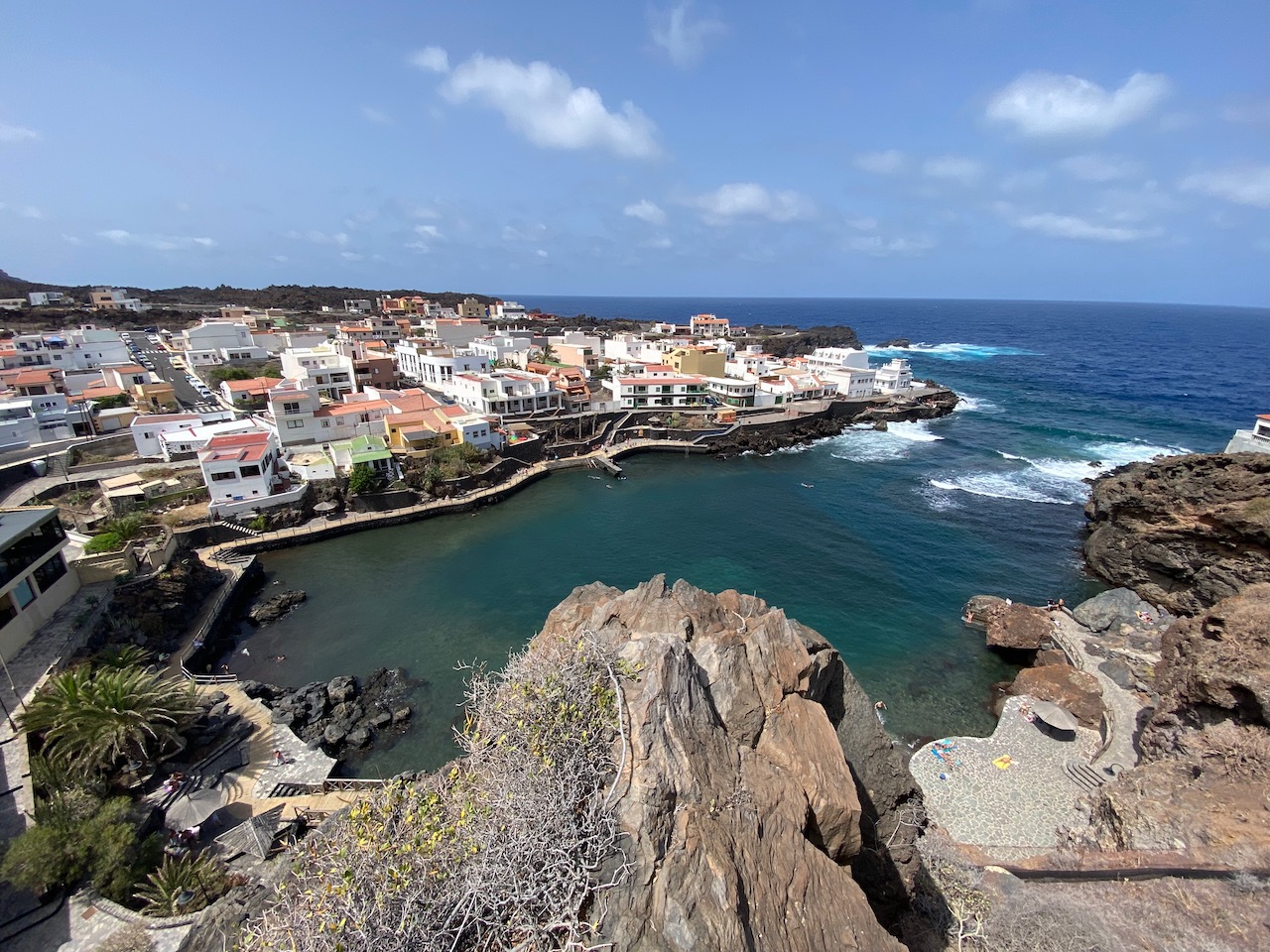 We visited El Hierro during our 8 Islands Road Trip in July 2021.

El Hierro, known as the Isla del Meridiano (Meridian Island), situated the furthest West and was the smallest of the islands (268 km²) prior to La Graciosa becoming the the 8th Canary Island.

The highest point is the Pico Malpaso (1501m). The length of El Hierro is approx 33km by 15km at the widest point and has a population of approx 11,000 residents. The capital is Valverde.

Naviera Armas have a direct ferry connection to Los Cristianos in Tenerife.

El Hierro was the only island we couldn’t make the ferry schedule work for us, so we took a 40 minute inter island flight. Our tip, book Autos Plus Car for this island, everyone had booked Cicar and the queue to collect our car took longer than the flight!

Our first stop was the Árbol Garoé (Holy Tree), back into the clouds it was another “fresquito” attraction, and we still didn’t have waterproof jackets!

Garoé translates to river / lake in Berber language. Situated in Tigulahe the tree is famous for providing water to the Bimbaches (early settlers on El Hierro). There’s a tiny visitors centre at the car park with a small entrance fee of €1.50pp.

Next stop was lunch before we checked into our hotel. We had planned to dine at Guachinche Aguadara on the recommendation of 2 different friends. The restaurant had other plans though and didn’t open as scheduled, we have no idea why. There was no phone signal in this area to call the restaurant, and after waiting for 30 minutes with 2 other vehicles we all gave up and moved on.

Fortunately Julie had a plan B just 5km away and we were lucky to be offered the last table in the courtyard at La Higuera de Abuela in Echedo, which was fabulous. This restaurant had young waiting staff who were very confident in their menu and knowledgable about local wines.

Our hotel for 2 nights is the parador El Hierro. Situated on a dead end road, on the island that was thought to be the end of the world. We had booked a superior twin room including breakfast and were delighted with our balcony view!

The hotel restaurant was surprisingly good, which was a good job, as there were very few alternatives in the local area. We expected the hotel to be old fashioned as Paradores hotels are normally found in historic buildings, however this one was purpose built in the 1970’s. Breakfast was a buffet with hot dish served. Dinner was a choice of dishes served from a select menu.

Day 14 we started at Punta Grande where you can find the smallest hotel in the world, and a view to Roques de Salmor with some great outdoor furniture.

Next stop was at the Ecomuseo de Guinea to see the lagartos gigante (giant lizards) & an original town, we didn’t have 2 hours to spare, so opted out of the guided tour which also included a volcanic tunnel.

We were passing Bodegas Uwe Urbach and having tasted it at La Higuera de Abuela, we decided to pop in to buy some wine. Dulce (from Queensland) and her dog Aussie gave us a warm welcome, it’s the kind of place where locals drop in for a chat and to drop off or buy local produce. NB. they don’t take card payments, so we used Bizum for our purchases.

It was low tide at the Charco Azul, there wasn’t anyone swimming in the pool, but a few enjoying the photo opportunities. We walked down in our flip flops with hindsight we should have switched to our trainers for the ascent. It’s free entrance, there are some decked platforms for sunbathing and a swimming pool next to the cave.

El Verodal beach has stunning red sand, but swimming is prohibited. It’s a lovely place for a picnic with built in tables and BBQ shaded area.

Climbing over 1,000 metres from the coast we reached the pine trees of El Pinar. The aroma of pine trees was fabulous as we drove through this area. We didn’t have time to look for the bent over El Sabinar trees or climb up to the highest point Pico Malpaso on this trip.

We dropped back down to the coast for a late lunch / early dinner at the harbour town of El Restinga, famous for scuba diving. I really wanted to dine at El Refugio but they were very busy with a queue waiting for tables. I knew they had camarones, our new favourite dish from this trip. Having established that other restaurants were closing until the evening, we returned to El Refugio and were offered a table. The parrillada de pescado was excellent value at €13pp.

We drove back to our hotel to enjoy a couple of local beers on our balcony.

Day 15 we left our hotel late morning for a last explore around El Hierro before catching our early evening flight to Tenerife. We stopped at the Homenaje a la Bajarda to find out what it was! It’s an art installation by Rubén Armiche using old domestic appliances and even cars to create a two headed sculpture for the Reutillzart project.

Next we visited El Pozo de las Calcosas, a small thatched roof village with sea swimming pool. Neither of us were tempted to make the climb down, we simply observed a local descend with a delivery in a wheelbarrow!

El Hierro is the first self sufficient Canary Island with 100% renewable energy. We visited the Gorona del Viento to understand how water and wind are used to power the island.

Next on our to do list was a fabulous lunch at the Mirador la Peña, we hadn’t booked in advance, but they gave us the best table! Designed by Manrique, we felt right at home.

We squeezed in a visit Tamaduste, which has a lovely waterfront area for swimming before our time in El Hierro ended. This area is only a few minutes drive from the airport, so a great place to hang out before a flight.

El Sabinar: the famous trees bent over by the wind

Valverde: we passed through the capital several times but didn’t find a reason to tempt us out of the car