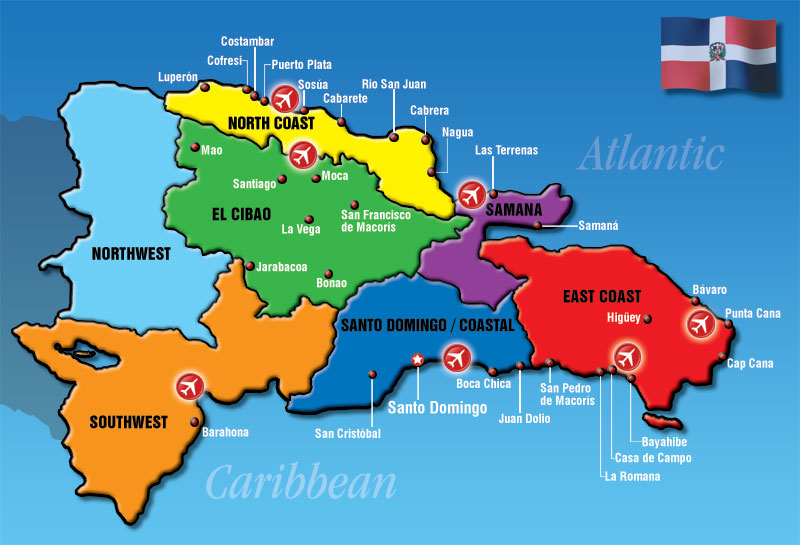 The island of Hispaniola is split into two thirds Dominican Republic and one third Haiti. The island was named by Christopher Columbus in 1492, and is the second largest in the Caribbean after Cuba.

Seasons
There are two peak tourist seasons in the Dominican Republic, Summer is considered July & August and Winter from December to February.

Climate
The Dominican Republic is known for their “endless summer” due to the tropical warm and sunny conditions enjoyed most of the year. The winter season is from November to April, these cooler months have lower humidity with an average of 28°C in the coastal resorts during the day and 20°C overnight. In summer, which is considered May to October, the daily average in the coastal resorts rises to 31°C in the day and 22°C at night, the higher humidity can make it feel much hotter during this time of year. Temperatures in the desert region (southwest) can reach 40°C.

The rainy season is predominantly October to April in the north of the Dominican Republic and May to November in the south. Expect short bursts of torrential rain with the sun out shining an hour later.

The hurricane season is from June to November, the months of August & September are considered the prime risk for tropical storms & hurricanes in this region.

Casa de Campo: Golfer’s delight with 3 courses designed by Pete Dye including Teeth of the Dog which is ranked 43 out of the top 100 courses in the world

San Cristóbal: Superb beaches with AI hotels but the southwest coast has been unable to emulate the success of the southeast resorts as yet

Language
Spanish is the official language spoken in the Dominican Republic.

Tourism
According to data from the Caribbean Tourism Organization the Dominican Republic received 5.14 million tourists in 2014, which was a 9.6% increase compared to arrivals in 2013. Their goal is to reach 10 million annual visitors by 2023.

Entry Requirements
UK citizens can visit the Dominican Republic for holidays with a Tourist Card and a valid passport. The card costs US$10, it entitles the holder to stay for up to 30 days, it can only be used once and is valid for 1 year. The tourist card can be purchased online here www.dgii.gov.do/Tturistaweb

Departure Tax
There is a departure tax to exit the Dominican Republic, if this has not been included in your airfare, the amount due is US$20.