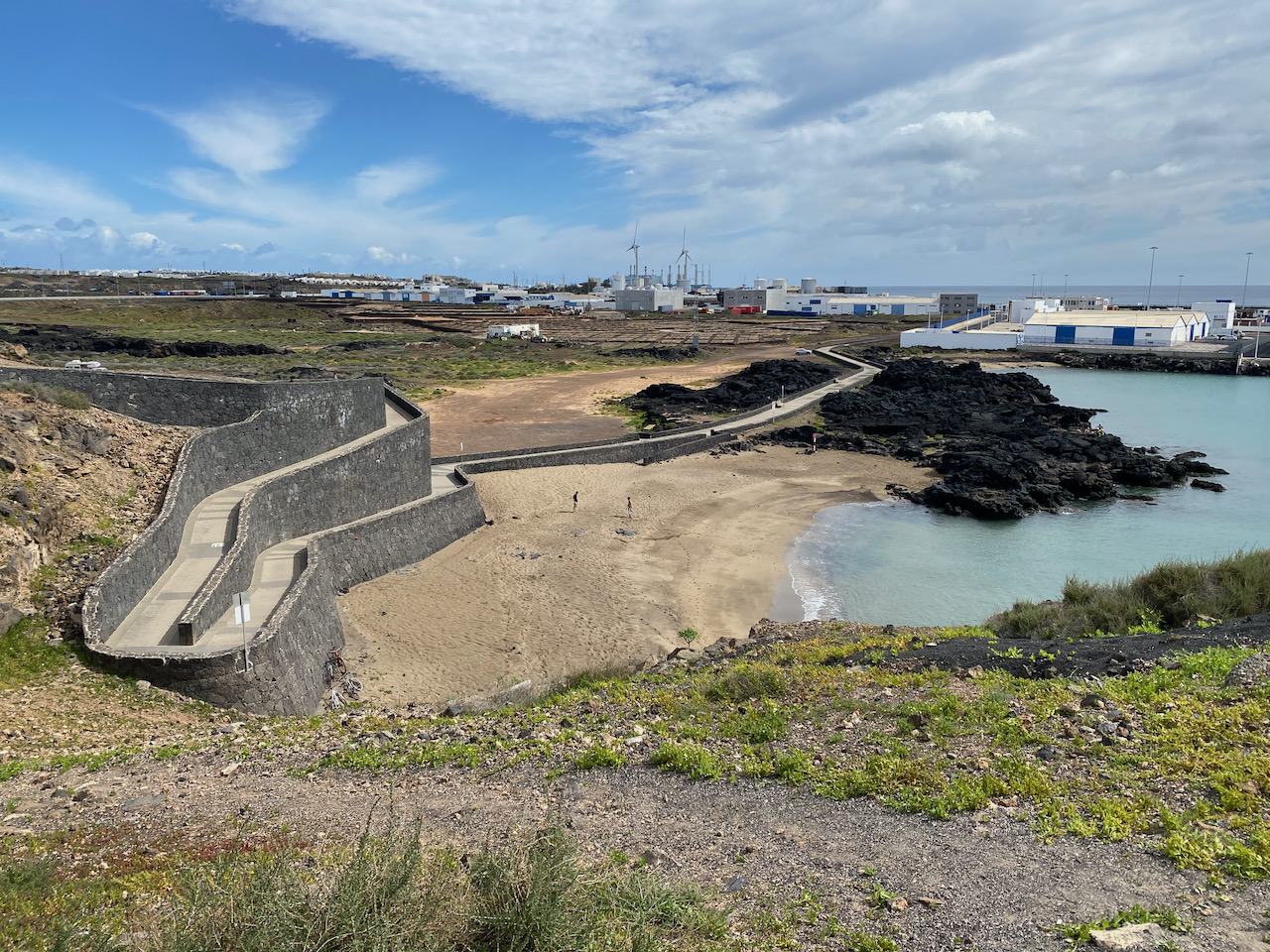 The Cruise Promenade walk connects the two ports in Arrecife, Lanzarote where cruise ships dock. The distance between Marina Lanzarote and Puerto de Los Mármoles is 3km. The information is primarily aimed at cruise visitors who dock at the commercial Puerto de Los Mármoles, who could walk this route in reverse to access the city centre. 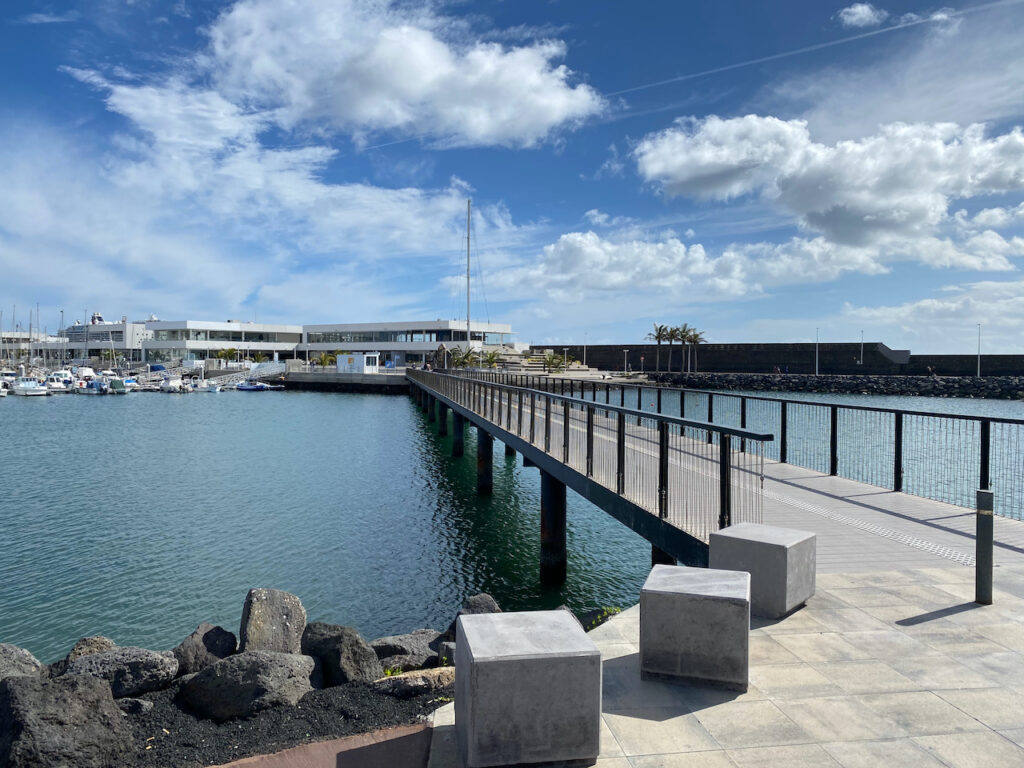 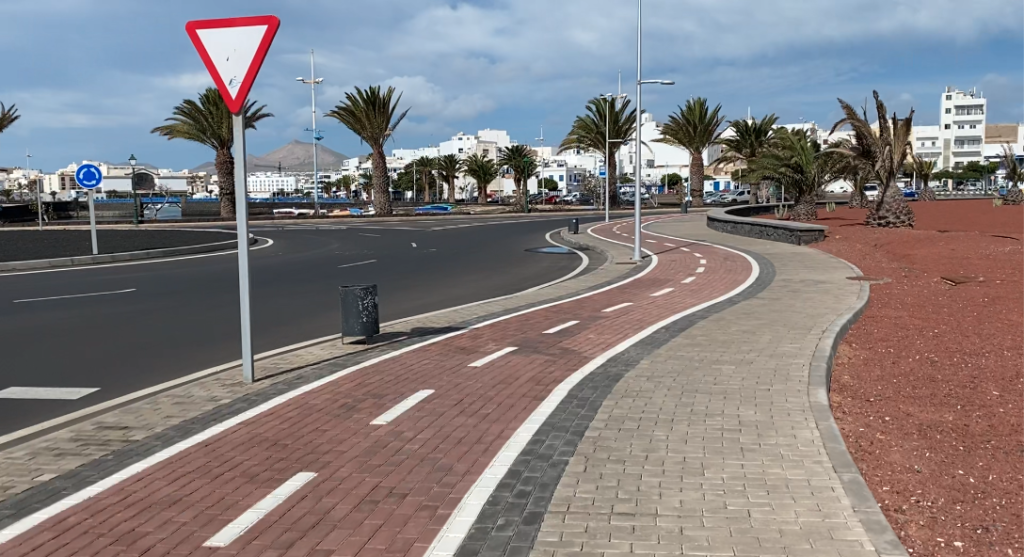 We started at the modern Marina Lanzarote in the centre of Arrecife. The TUI Mein Schiff I was docked here at the time (21 February 2021). There is a multicoloured pathway with a cycle lane & pedestrian area leading away from the marina. Just around the corner on the opposite side of the road, is the Hospital Insular de Lanzarote, which was founded in 1950. 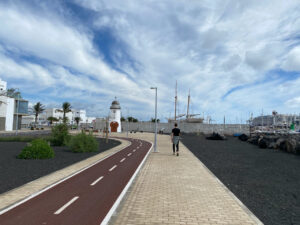 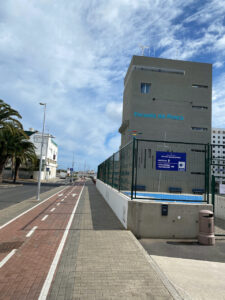 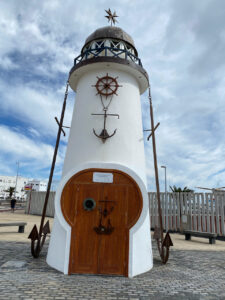 Past the Escuela de Pesca (fishing school) the footpath opens up into a little park area where you will find the Monumento a los Mártires del Mar “La Luz que nos guía”. This replica of a lighthouse is a moment to the seven sailors aboard the Cruz del Mar fishing boat which was lost at sea in November 1978. Additionally it represents all sailors who departed from Arrecife and never returned.

Continue along the footpath, skirting the outsides of the concrete fencing of the commercial Puerto Naos. There are a few traditional tapas bars in this area including the Bar Cofradía de Pescadores San Ginés, Bar Luna & El Molino. 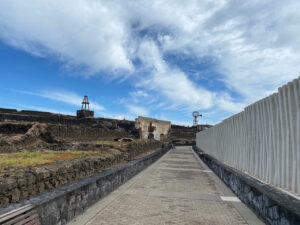 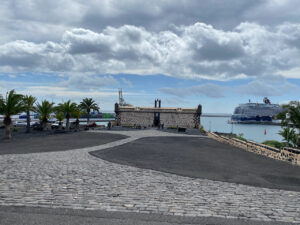 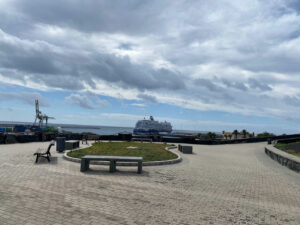 Seating area with a view

Before the road turns and starts to climb towards the castle, the footpath separates off to the right, past a ruined building where you can sometimes see the metal jolatero boats being made.

The view opens up back over the marina and towards Arrecife city centre. Continuing on, the Castillo San José is home to the MIAC (Museum of International Contemporary Art) and restaurant MUAC which has a spectacular view. 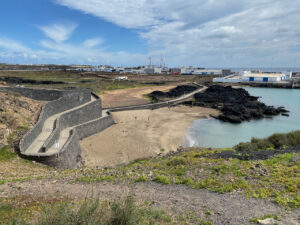 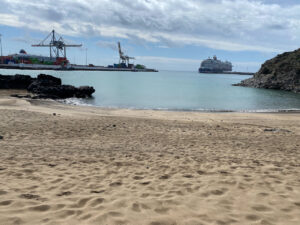 Time for a paddle 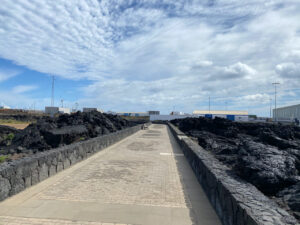 Footpath through the lava flow 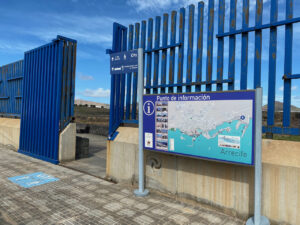 As you reach the brow of the incline, there’s an open area with seating, before the footpath descends to the hidden beach of Playa de la Arena. Cutting through the lava flow the footpath ends at the blue fencing of the Puerto de Los Mármoles.

The older section of this footpath was originally installed to help cruise passengers walk into the capital from Puerto de Los Mármoles. Eventually it will connect the two holiday resorts of Costa Teguise with Puerto del Carmen, via Arrecife.

The stretch of promenade from Puerto de Los Mármoles to Costa Teguise isn’t completed as yet, but there is a track you can take. This route can’t be described as scenic, due to the power facilities located in this area. Never the less it was enjoyable and there are points of interest along the way.

Walk out of the port passed the old Customs & Excise building to the top of the road. Next, stroll down onto the beach in front of the Telamon shipwreck. This boat was deliberately run aground in 1981 and will eventually be dismantled for scrap.

Follow the outside of the wall around the fuel depot, desalination plant and power plant. If at this point, you want to avoid a short beach walk, take the left turning back up to the road, or continue on to see a delightful little cottage dwarfed underneath the power station. 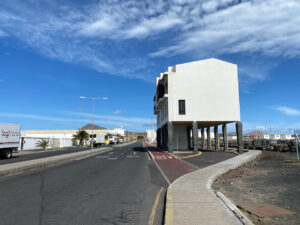 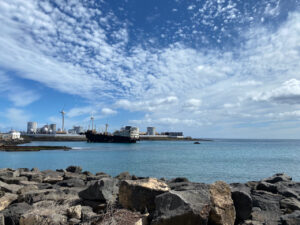 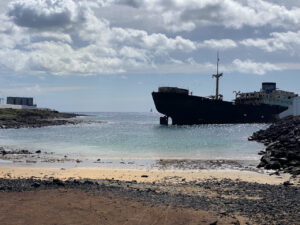 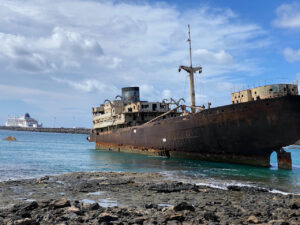 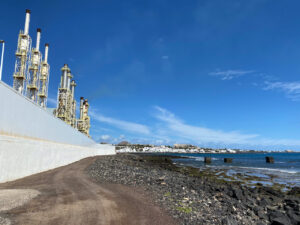 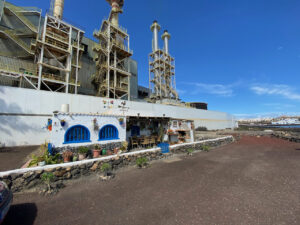 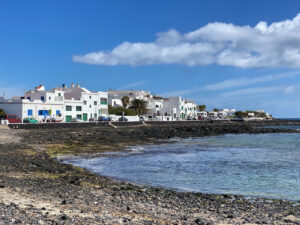 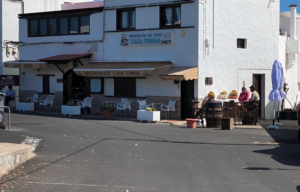 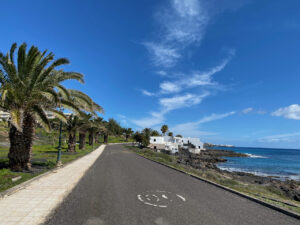 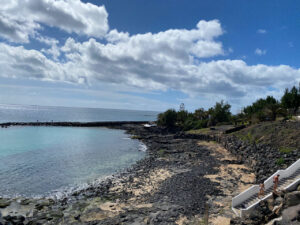 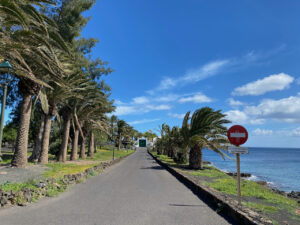 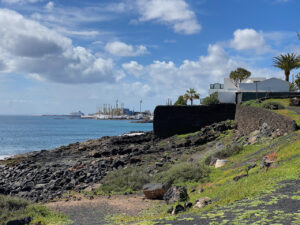 The far side of the King’s House 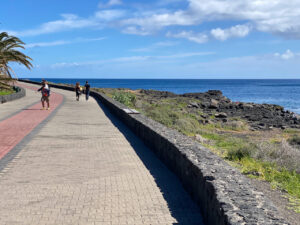 Take the coast road through Las Caletas village. You will pass Casa Tomas, which is a lovely local restaurant with sea views. Continue right along the coastline. Playa del Ancla can be accessed by steps as you level with the Occidental Lanzarote Playa. A bit further on is the entrance to the King’s house, at this point you need to skirt around the outside fencing off the building & helicopter landing pad. Now you’ve reached the start of the Costa Teguise promenade.

The whole walk from Marina Lanzarote along the Cruise Promenade and up to the far side of the King’s House was just under 7km. However, coming back we walked along the road past the power plant instead of along the coast. This reduced the length by 1km, to total 13km for our return walk.

Hopefully work will start on the missing section of promenade in 2021. At which point the holiday resorts of Costa Teguise will be linked by footpath and cycleway to Puerto del Carmen, via Arrecife, El Cable & Playa Honda.

If you have the fortune to be docked in Marina Lanzarote, access to the city centre of Arrecife is much easier. Simply head for the picturesque area of Charco de San Ginés for a selection of tapas bars & restaurants around a waterfront. Or Leon y Castillo for the pedestrian shopping street zone. Calle Ginés de Castro y Álvarez is a lovely street of cafe bars and restaurants. Across the Plaza de las Palmas is the pretty area of Callejón “El Aguaresió” which brings you back out on the Charco.

For a longer walk follow the promenade along the front to the left as you leave Marina Lanzarote. You will pass the Grand Hotel which is the tallest building on the island. Also Playa del Reducto beach which has sun beds for hire and is beautiful at high tide. Further on the footpath continues for 10km through the Spanish town of Playa Honda which has a selection of lovely local restaurants with sea views. Plane spotting at the end of the runway. Finally reaching Matagorda and the start of Puerto del Carmen.