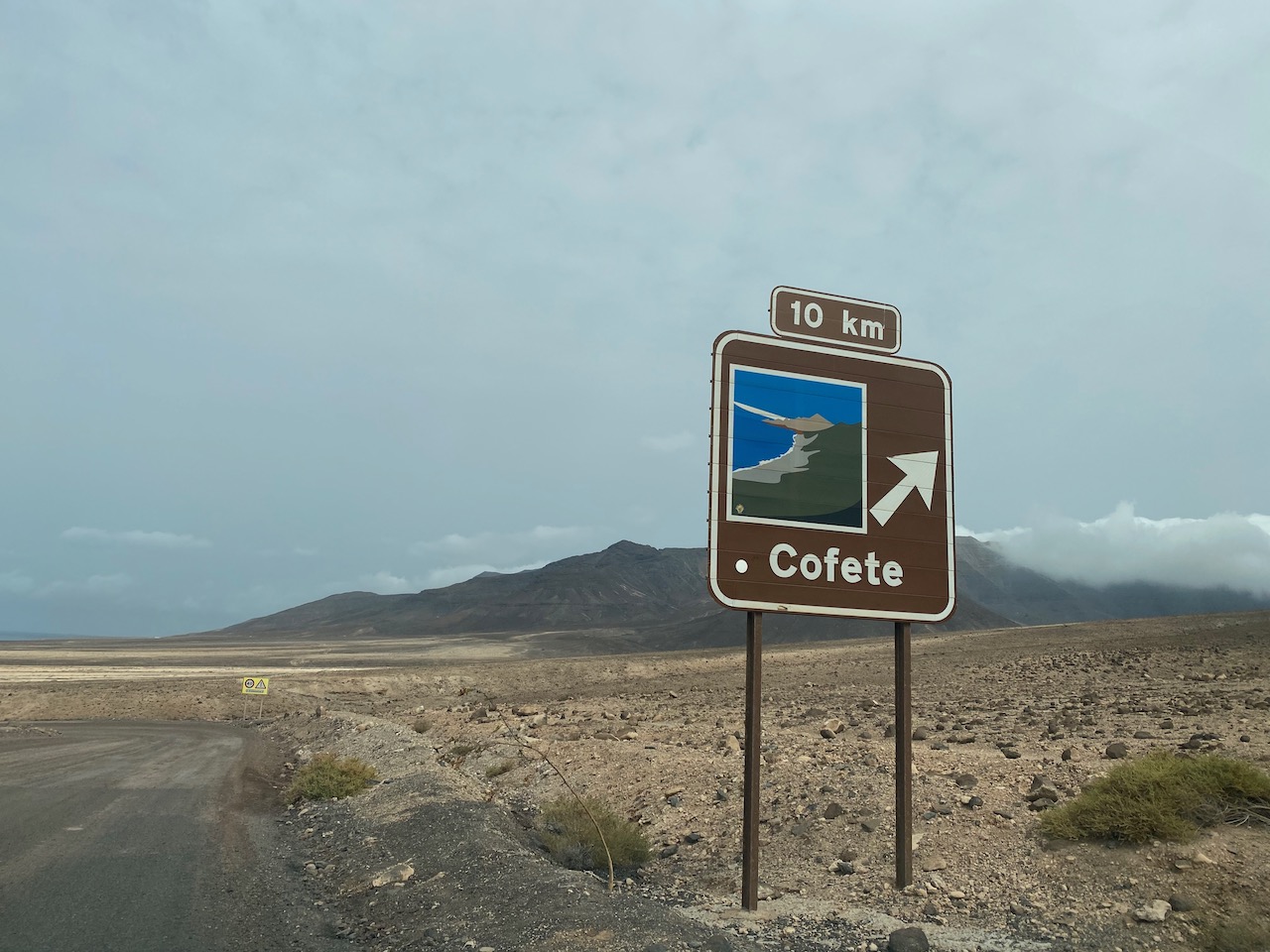 During our recent stay in Morro Jable in the South of Fuerteventura, we decided to head off road to visit the Playa de Cofete.

This beach had been on my to do list since I had learned of the turtle project to reintroduce the Caretta caretta, loggerhead turtles some years ago.

You can hike the PR-FV-55 from Morro Jable to Cofete, it’s 10km in each direction. There’s also a 4×4 bus service, the Línea 111 service departs twice daily from the bus station in Morro Jable at 10:00 & 14:00. The estimated departure time to return from Cofete is 12:45 & 16:45. It costs €8.70 for visitors. If you have a hire car and intend on driving the route, please do check if you can drive off road as most companies prohibit this.

Admittedly, we didn’t pick the best day, the sky was grey due to a calima and a thick cloud hovered on the top of the mountains in the Parque Natural Jandía. There was a surprising amount of traffic heading out on the carretera Punta de Jandía, including motorhomes. If you want to travel at a more sedate pace than the general traffic, simply pull over and let the vehicles pass you when possible.

We took the turn off for Cofete, which was well signposted showing a distance of 10km. This graded road is mainly in good condition, you have to keep vigilant for rock falls and on coming vehicles around blind bends. The golden sand stretches for 15km at the foot of the mountains. It’s reminiscent of Famara in Lanzarote, a rough coast, this location is not recommended for swimming and only the most experienced of surfers. 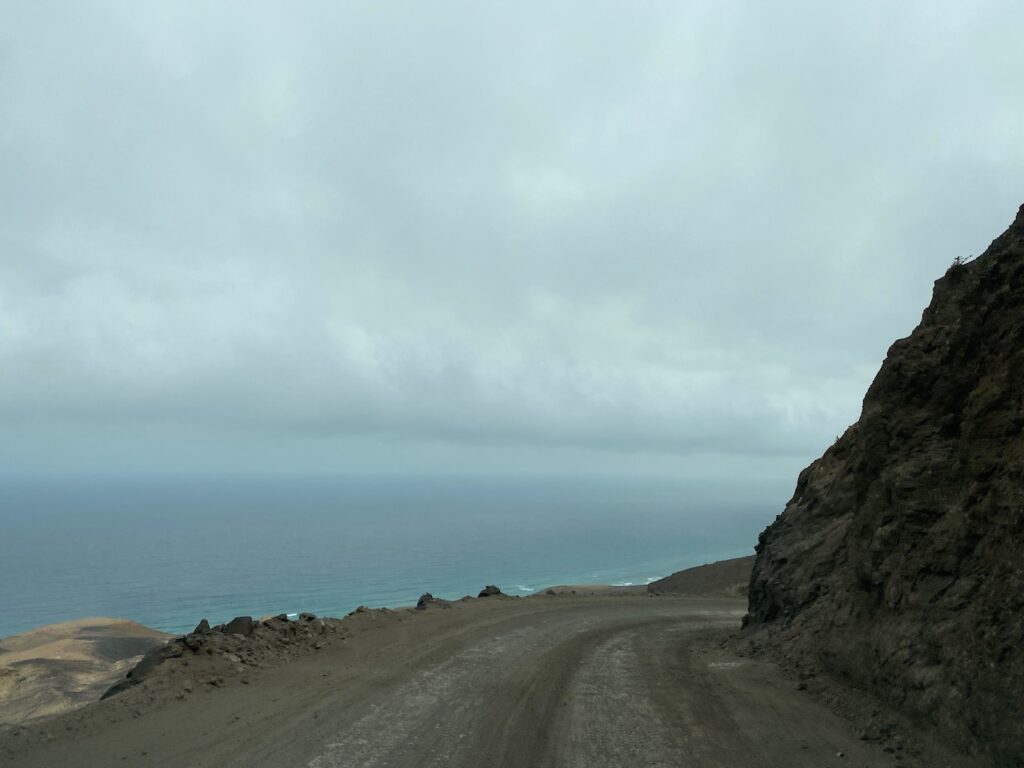 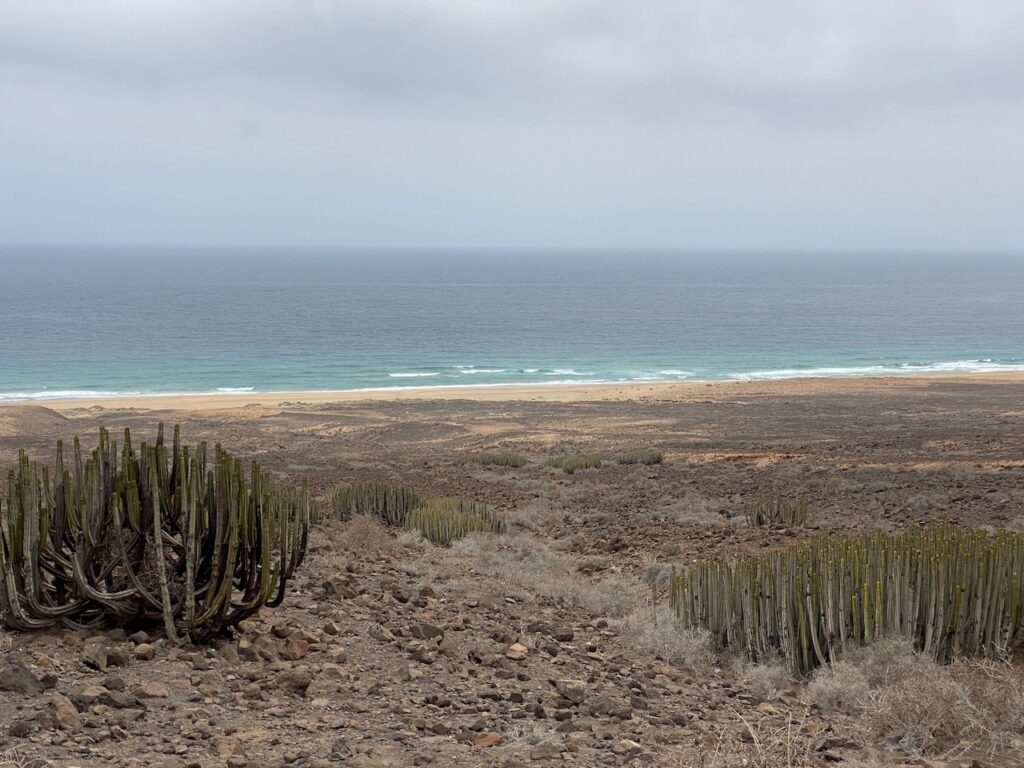 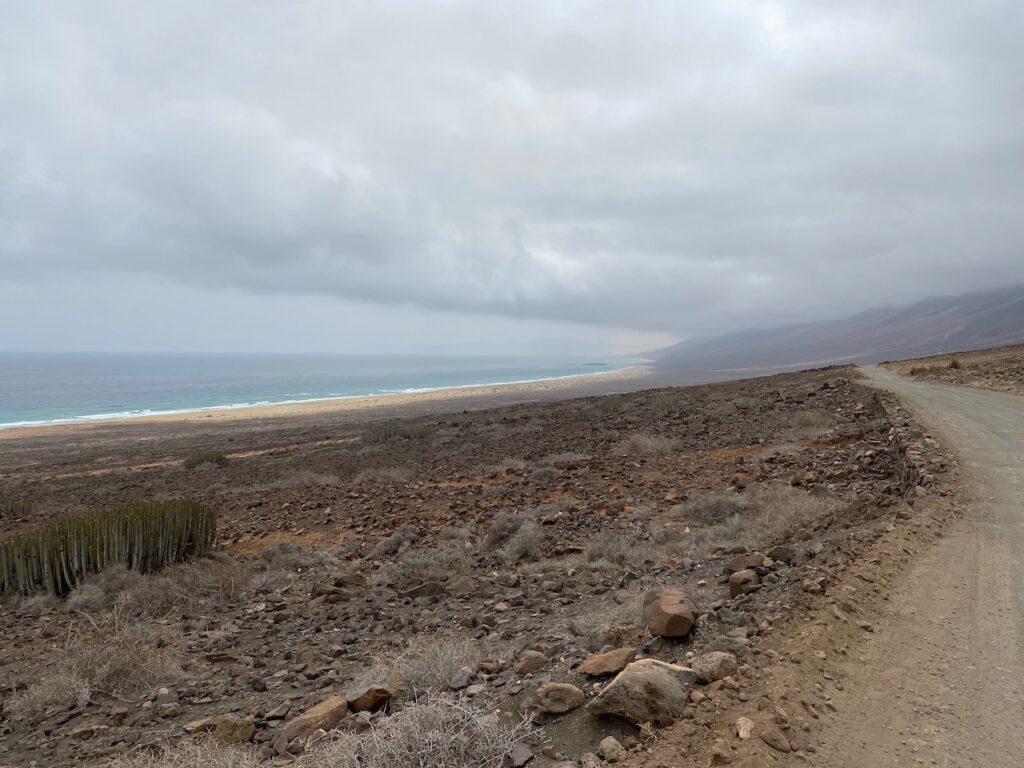 The track leading down to Cofete

The village of Cofete is little more than a shanty town. There is one establishment the Restaurante Cofete specialising in fish soup and goat meat. We stopped by the Cofete cemetery which was established in the early 19th century. Locals started burying their deceased in this spot as it was too far to travel to their nearest church in Pajara. The last burial was performed in 1956. The wooden crosses marking the graves were covered by the drifting sand. 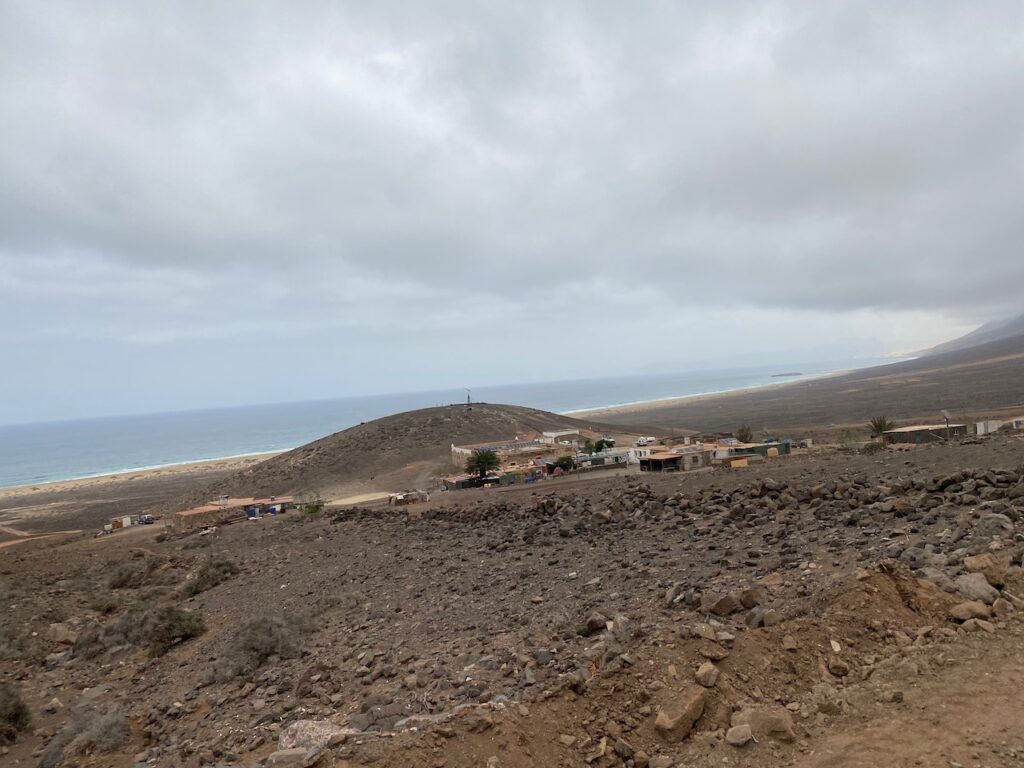 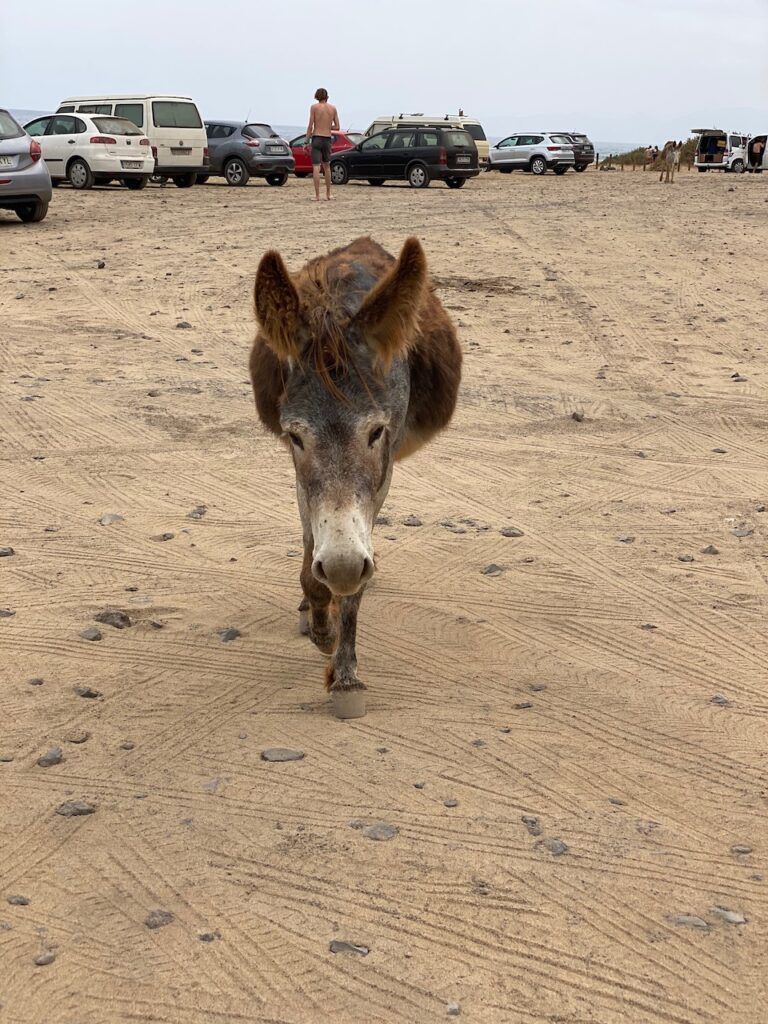 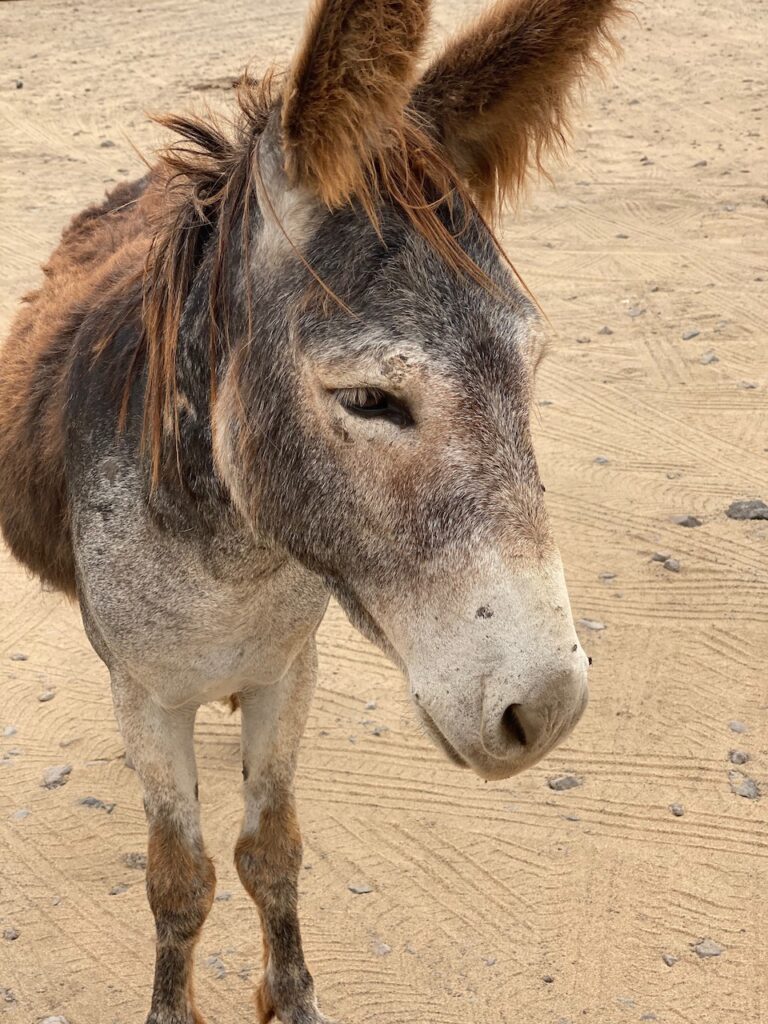 Greeted by a wild donkey 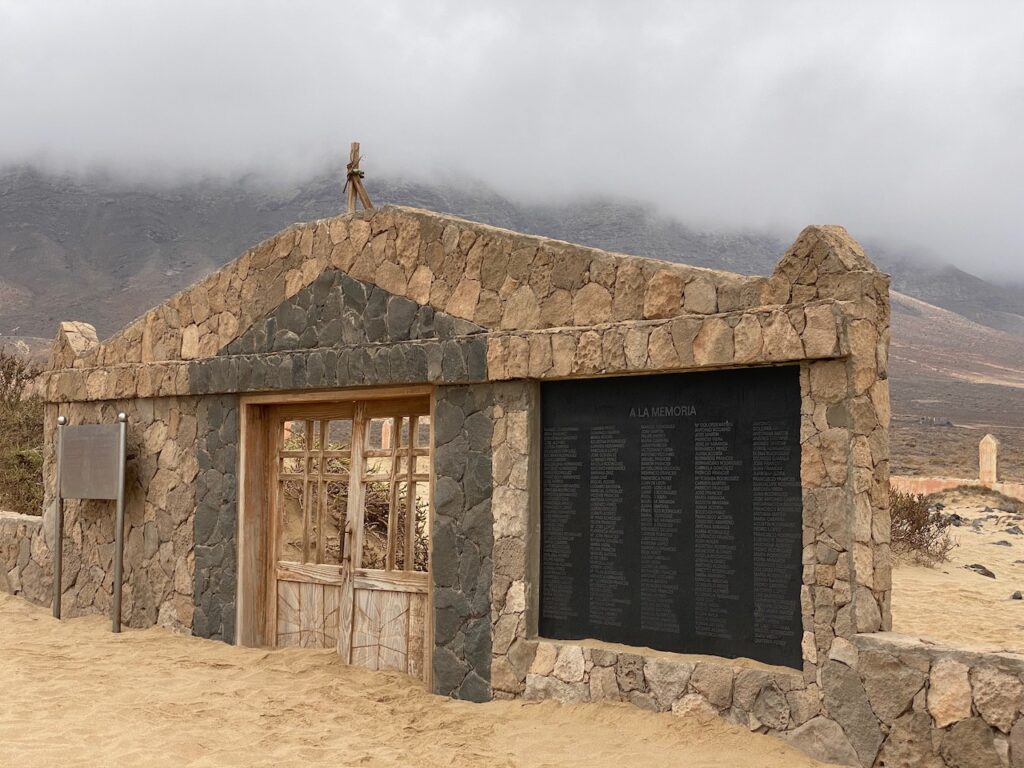 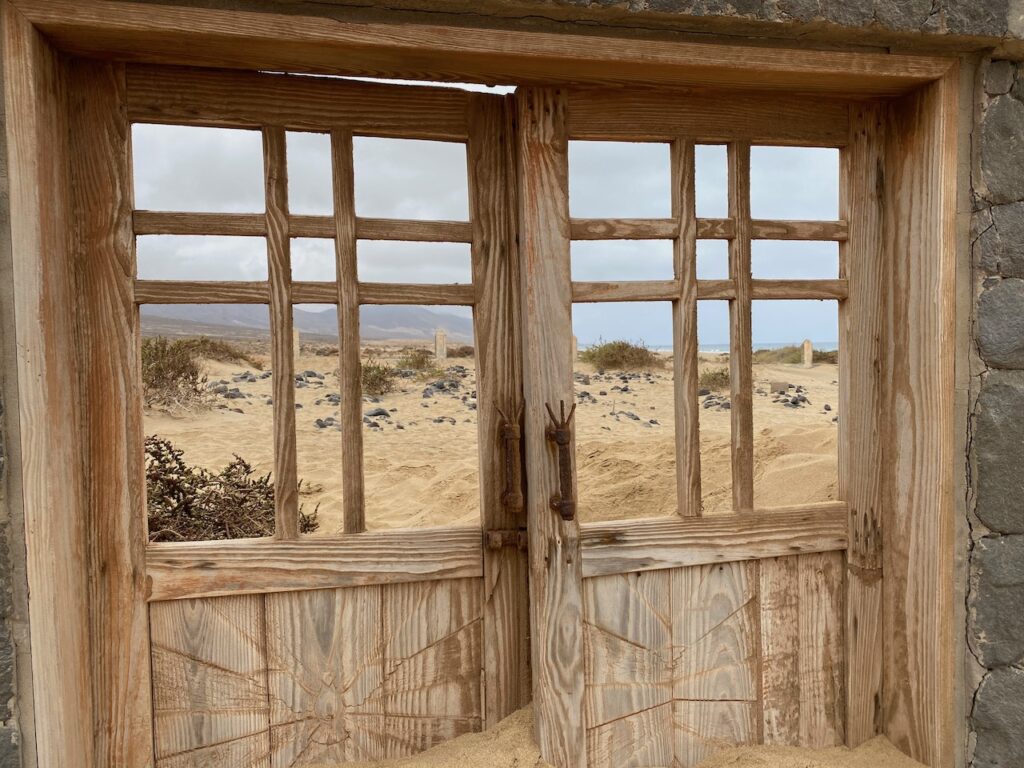 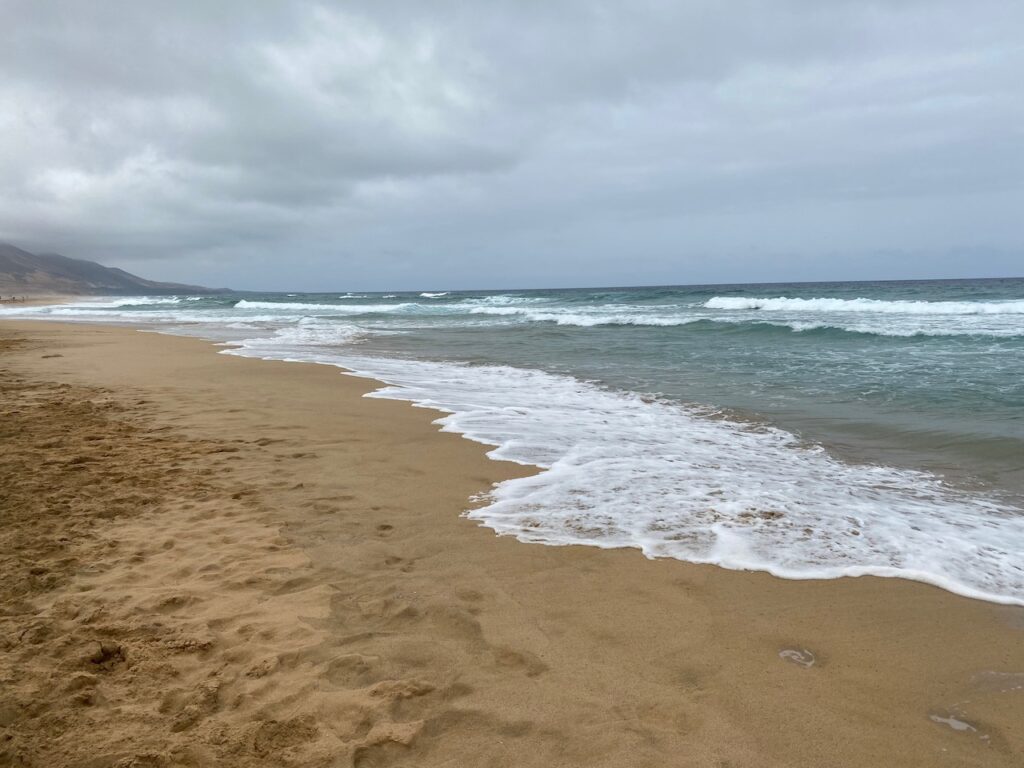 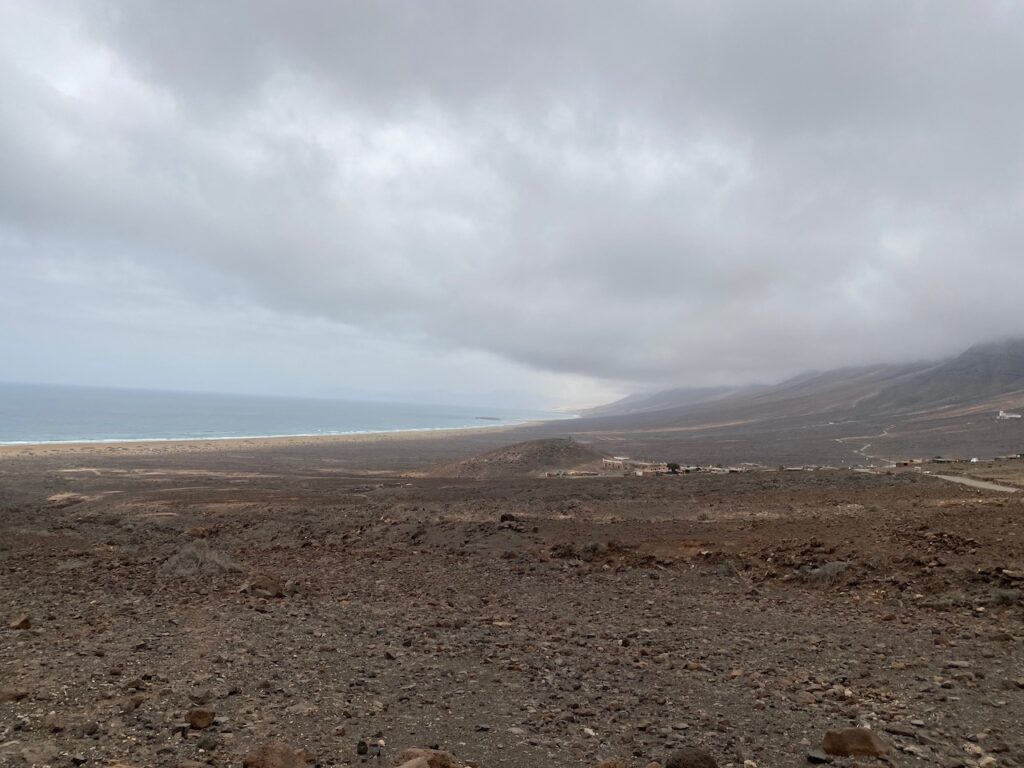 Villa Winter is far right in the distance

We parked by the beach and was immediately welcomed by one of the wild burros, sadly we hadn’t brought any treats, so we were dismissed in favour of other arrivals.

The beach was quite popular, despite the location and overcast sky. It’s also a location favoured by naturists.

El Islote is the rock in the distance connected by a sand spit and a popular viewpoint.

I regret not driving a bit further along the track to see Villa Winter in more detail. So now we have another reason to return. This imposing property was built by Gustav Winter is shrouded in legend. This German engineer is said to have arrived in Fuerteventura during the 1920’s with a suitcase full of cash to build a military base for the Third Reich. Locals were exiled from the area, tales of submarines, secret bunkers, submarines, gold reserves and Nazis undergoing cosmetic surgery were all rumoured during their occupation.