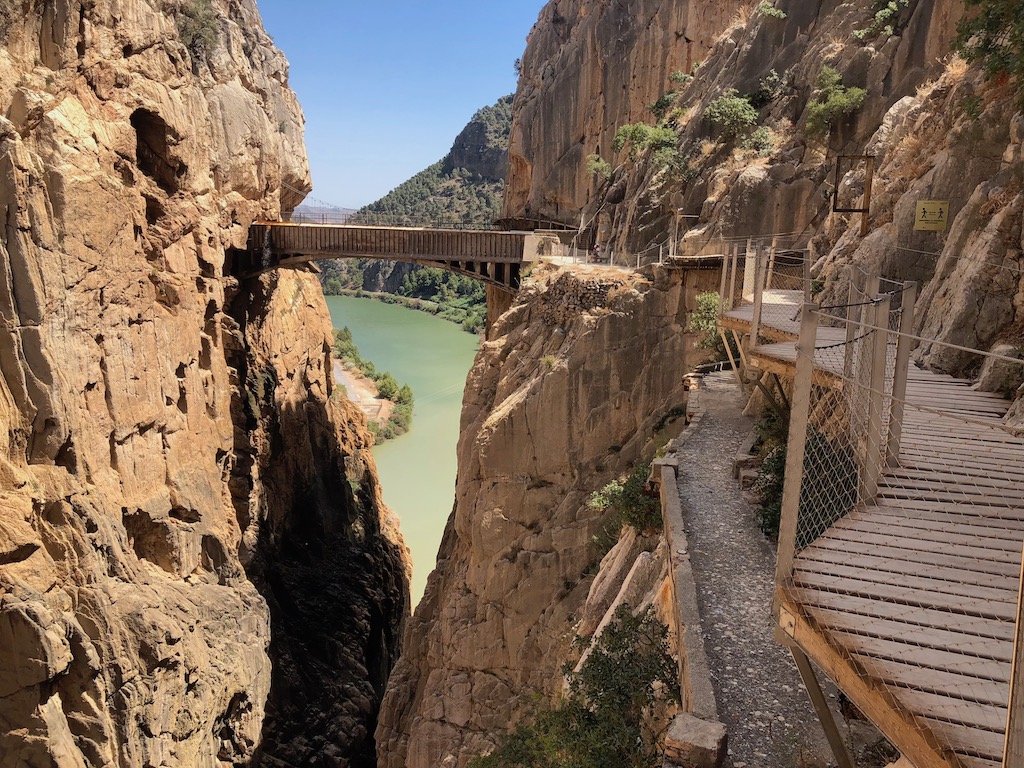 We were very lucky to reserve places on the Caminito del Rey, situated in the Ardales province of Málaga. The Caminito del Rey is a stunning walk and definitely something for your bucket list if you enjoy walking.

Despite the official website being in English it was quite difficult to work out where we needed to be to complete the walk. When we finished it became obvious that it was originally designed to be walked from South to North, and I think for a while it could be walked in both directions. However in 2018 the route is 1 way from North to South. 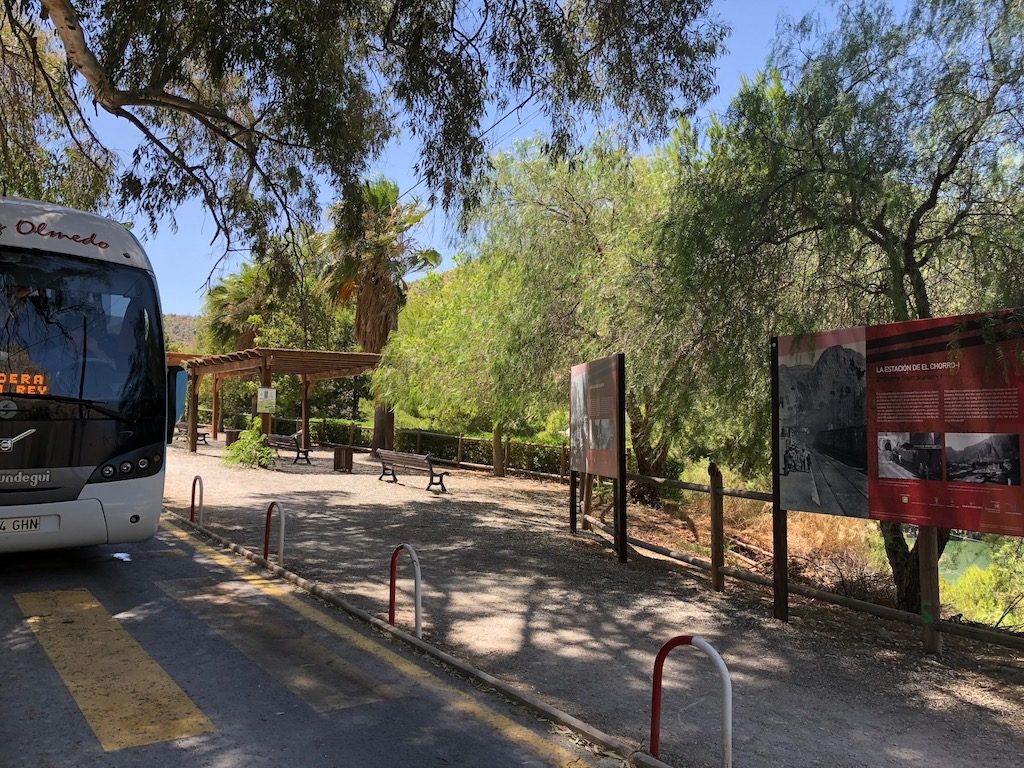 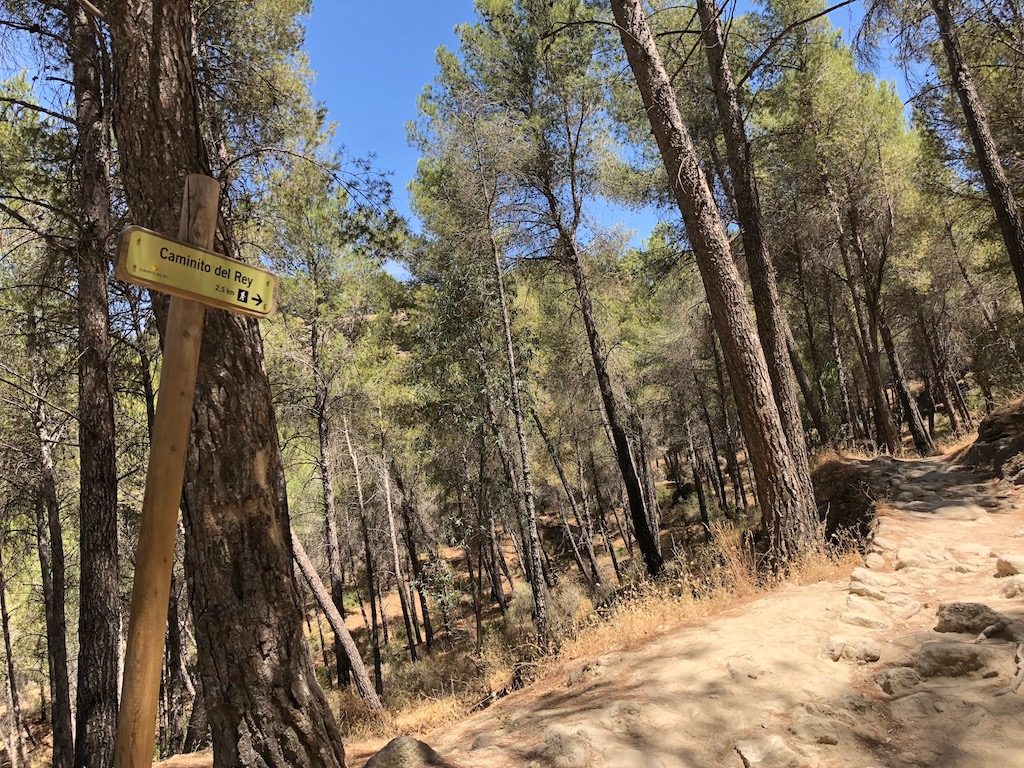 Start of the Caminito del Rey footpath from the North 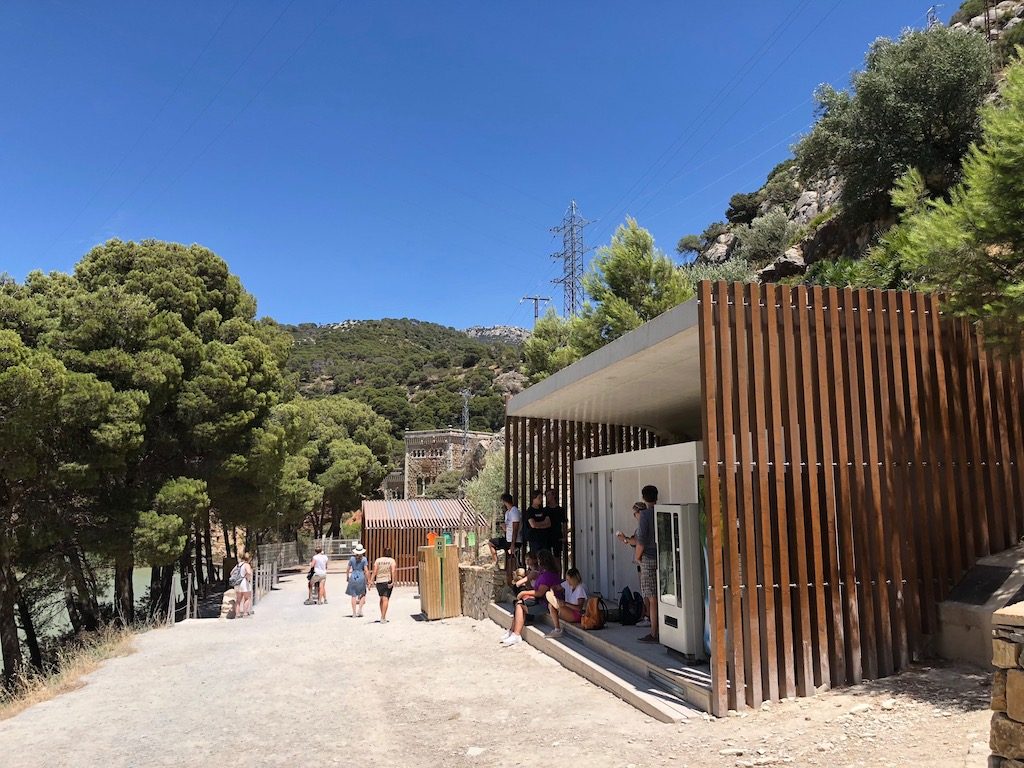 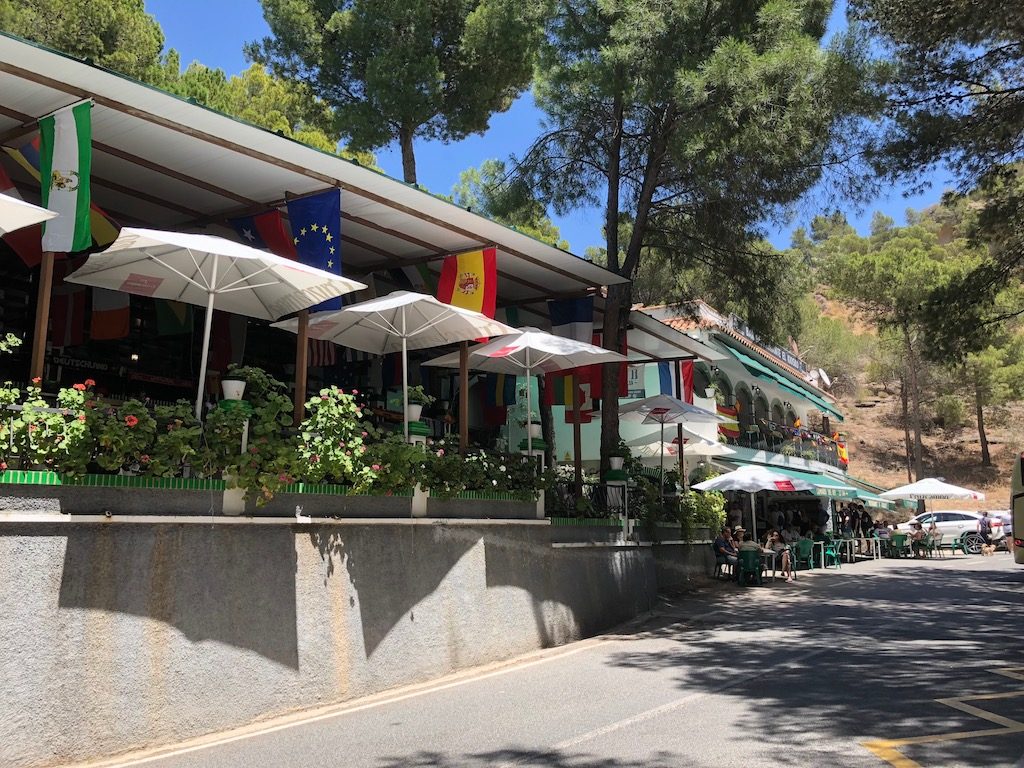 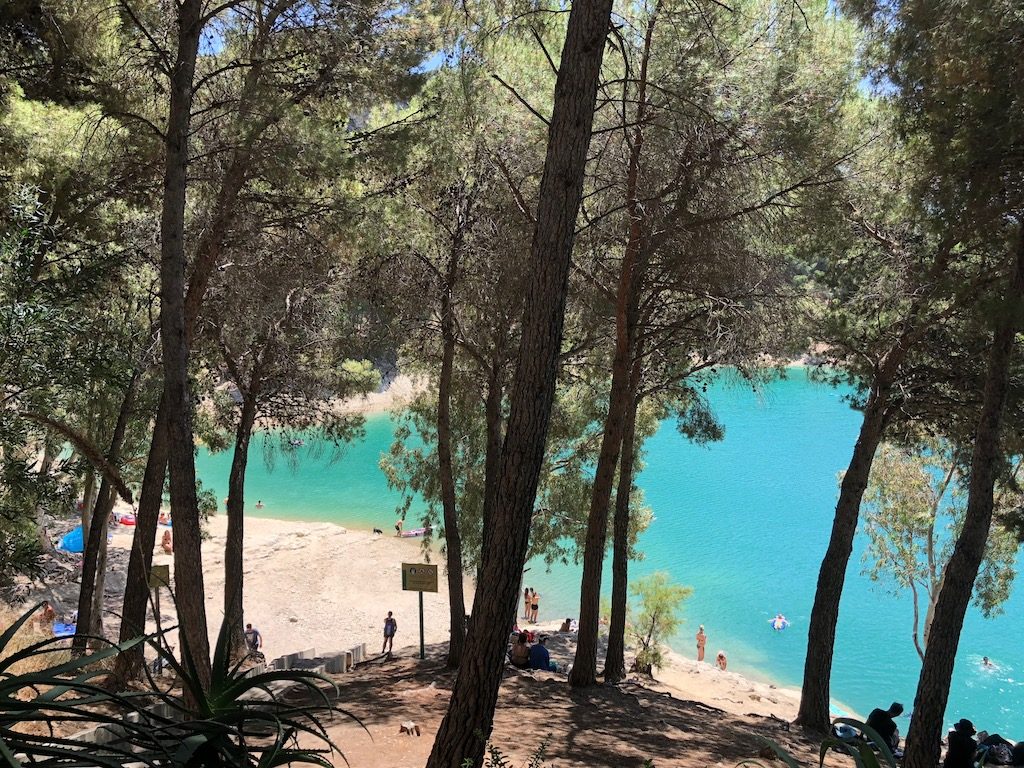 Lake view from the mirador

The Caminito del Rey can be completed as a day trip from Fuengirola, Málaga and Sevilla. We would suggest driving to El Chorro, in the Valle del Guadalhorce, Álora. When you’ve parked your car, the bus stop is situated on the Barriada Estacíon del Chorro, they run about every 30 minutes so you may have a short wait whilst the bus fills up with walkers. If you didn’t buy a ticket with the bus fare included, you can pay the driver directly.

The bus takes the winding road MA-5403 up to the Restaurante El Mirador Ardales where the driver signalled for us to walk through the tunnel to pick up the path to the control centre for the start of the Caminto del Rey. We got off here, if we had continued a bit further along on the journey, I believe there is a visitor centre and car park for the Caminito del Rey. We now had a 2.7km walk on a forested footpath which was nicely shaded with views over the Embalse de Gaitanejo water.

One of the problems with the walk is gaging how much time you need to allow to reach the control centre, as you have to be on time for your group to enter. I would suggest allowing 2 hours from the point of parking your car at the South access point, as you can wait up to 30 minutes for the bus to depart, this takes 20-25 minutes to the drop off point, and then the 2.7km walk to the gate. If you’re parking at the North access point, you need to allow 1 hour to return to your vehicle at the end of the walk.

At the control centre, there were 2 briefings given, one in English and the other in Spanish, we were all issued hair nets and a white hard hat to wear for the duration of the walk. It was time, our group started off through the entrance, and we all found our own pace, some striding out, others hanging back to take photos. This isn’t a guided walk, so you can stop and take in the views at leisure, it’s suggested to allow 3-4 hours to walk this 5km section. 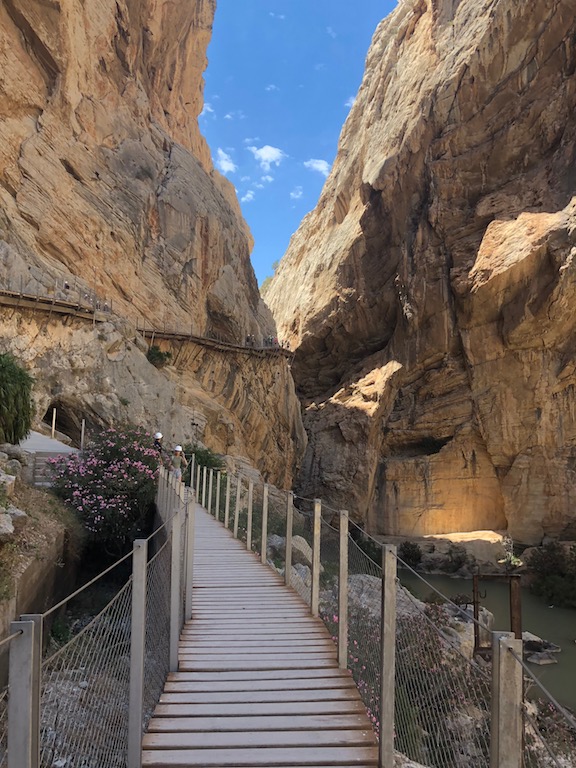 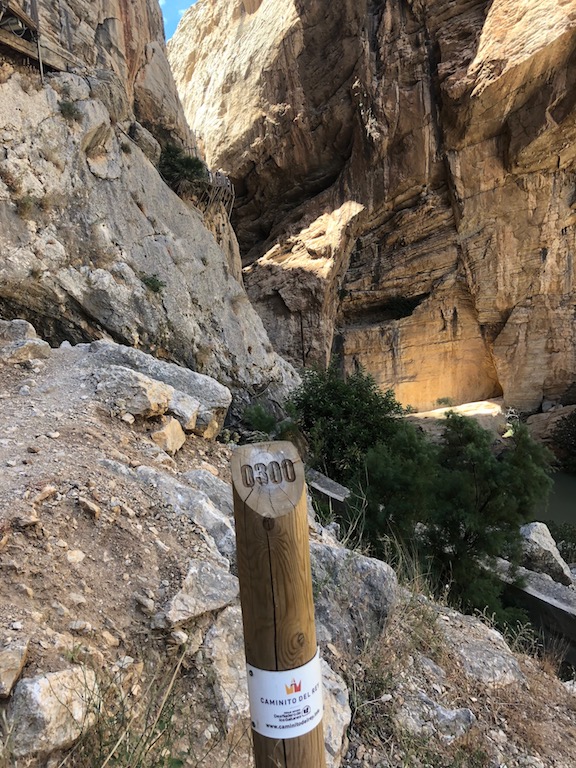 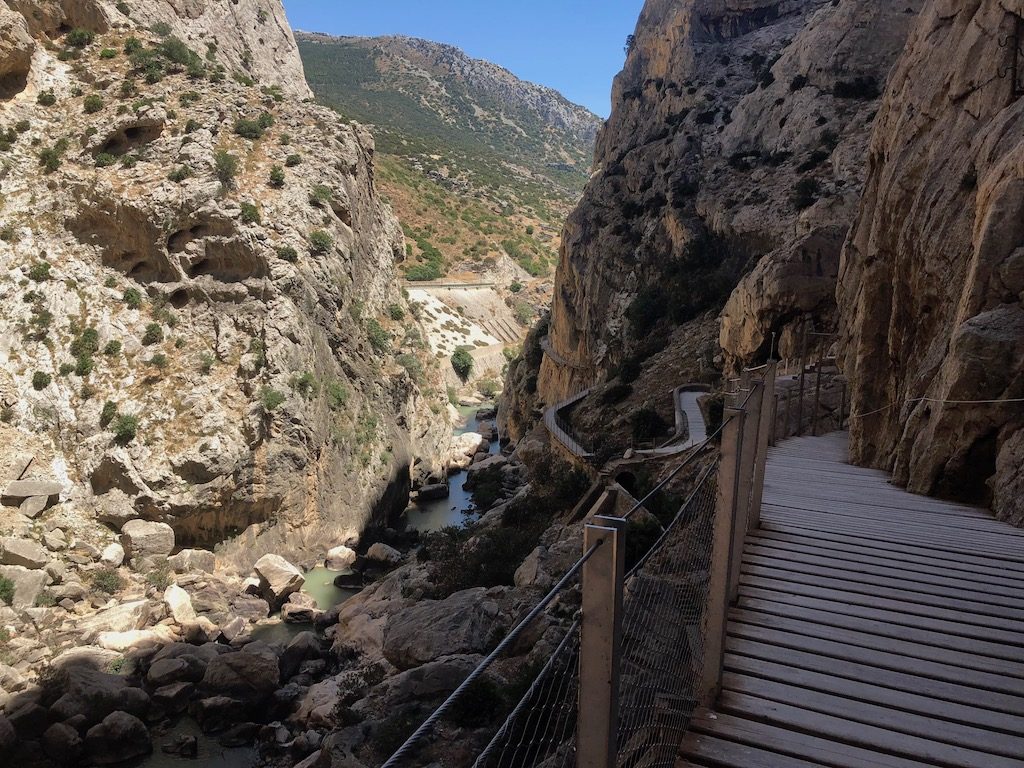 Zig zag path through the gorge on the Caminto del Rey 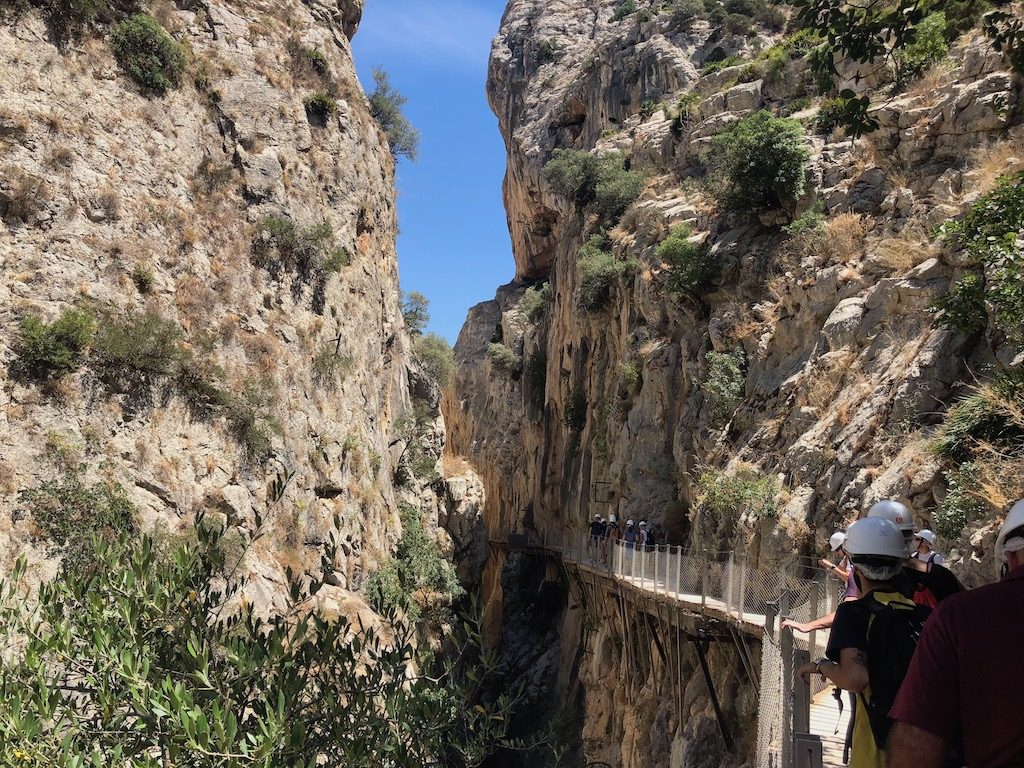 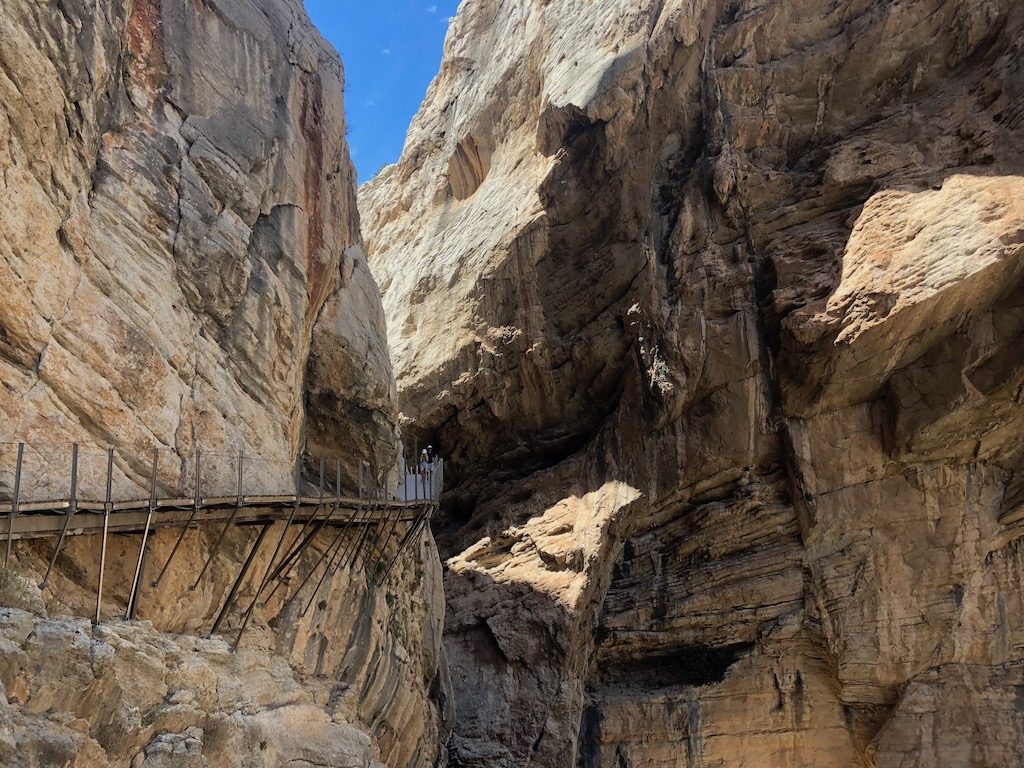 Looking up at the Caminito del Rey boardwalk 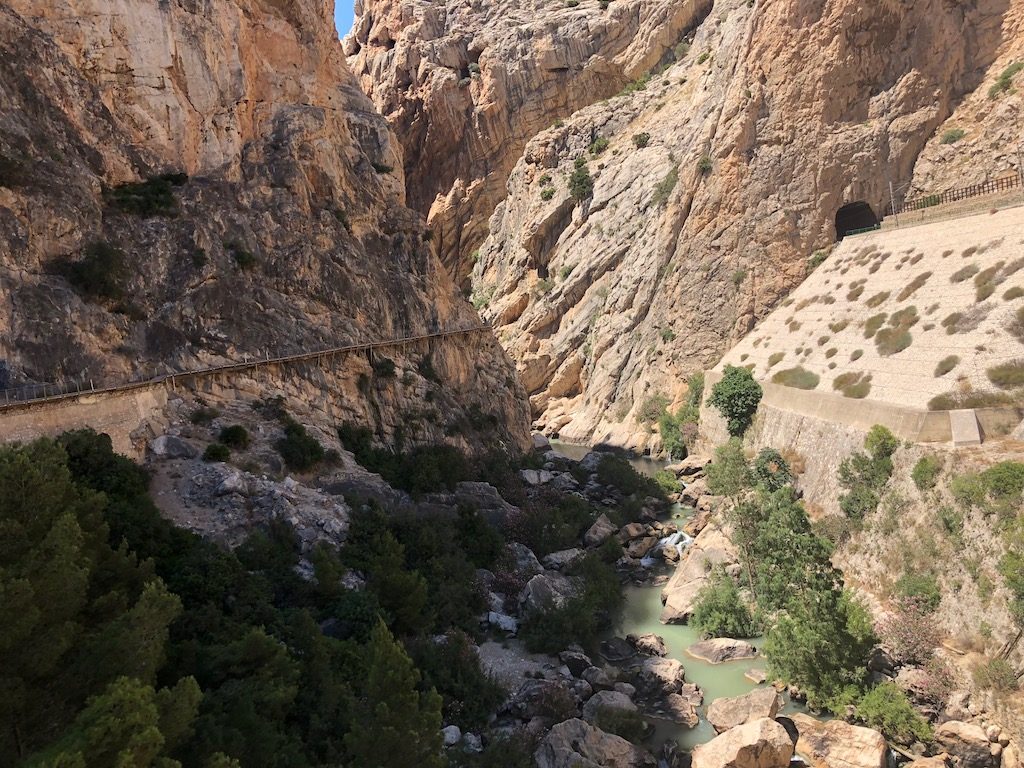 Caminito del Rey opposite the railway 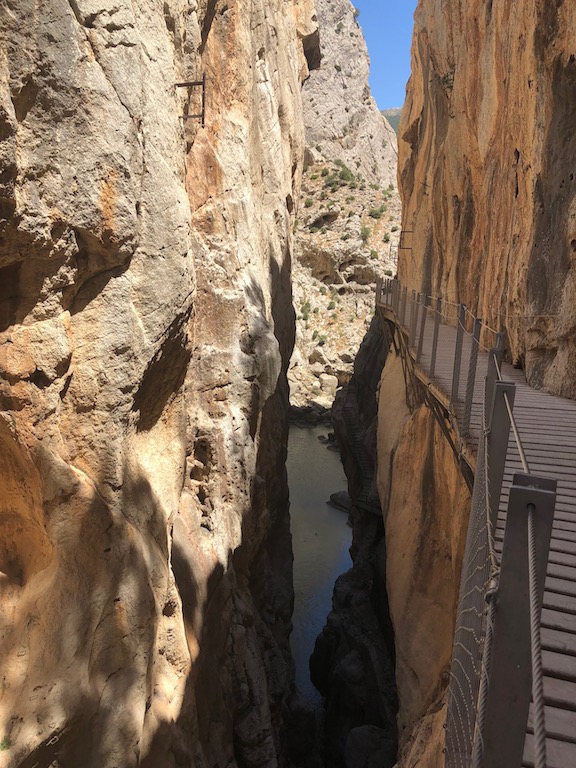 I haven’t mentioned until this point, that the footpath is on a narrow boardwalk through a gorge, suspended approximately 100m above the water!  Walkers are advised by signs to keep 1.5m distance between them, we were happy to oblige as we had no desire to test the weight load.

Before the mid 19th century only shepherds or hunters entered the gorge. In 1865 the railway was completed through this area with tunnels and viaducts connecting Málaga and Córdoba. In 1906 hydropower was created at the Salto de Chorro by diverting water through a 3km tunnel, on the opposite side to the railway. The original footpath known as the Balconcillos de los Gaitanes, was created for maintenance access for the hydropower engineers. This narrow concrete ledge can still be spotted in places immediately below the wooden boardwalk.

Once through the first gorge, the landscape opens up into the Valle del Hoyo and we spotted huge birds circling high above us. The high cliffs are home to a colony of Griffin Vultures, as well as Golden Eagles, Egyptian Vultures and Peregrine Falcons. We spotted dragonflies and the bat reserve whilst we walked through the trees in the valley.

The route is staffed in sections along the way, so if you need any help or advice, you can find a member of staff denoted by their orange helmets. There’s also cameras keeping a watchful eye on some of the boardwalks. 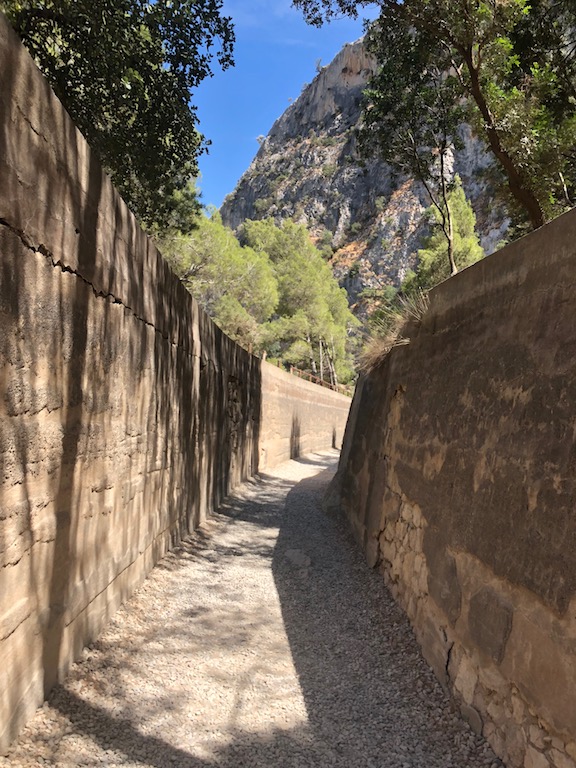 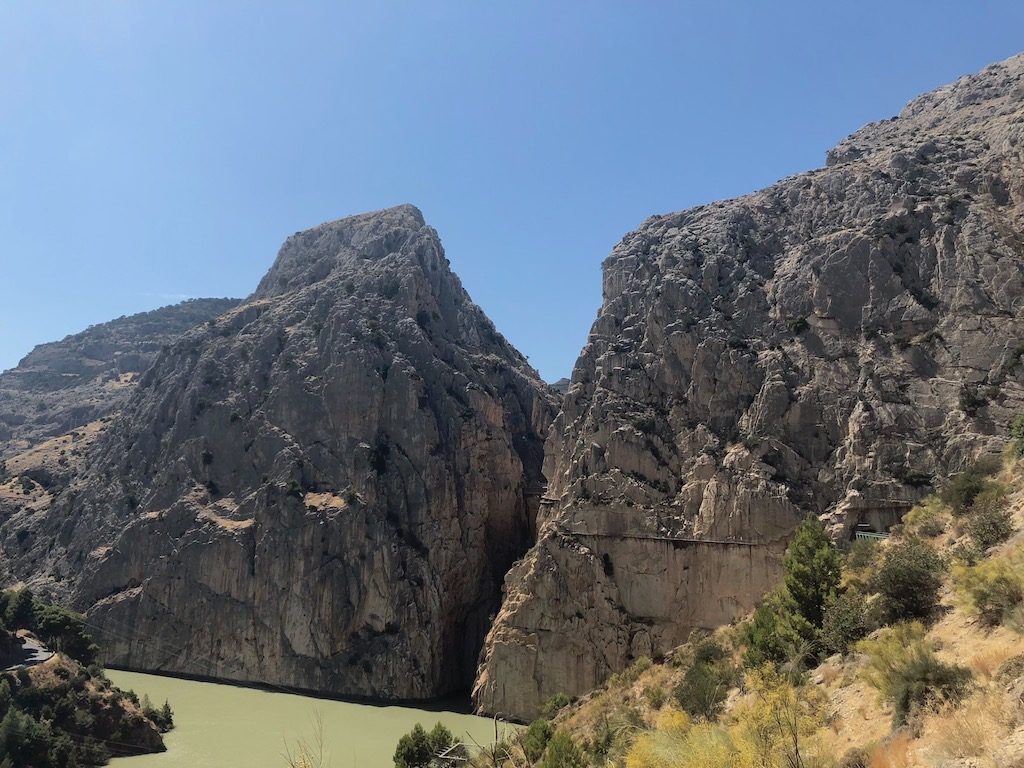 Looking back at the gorge from the south access 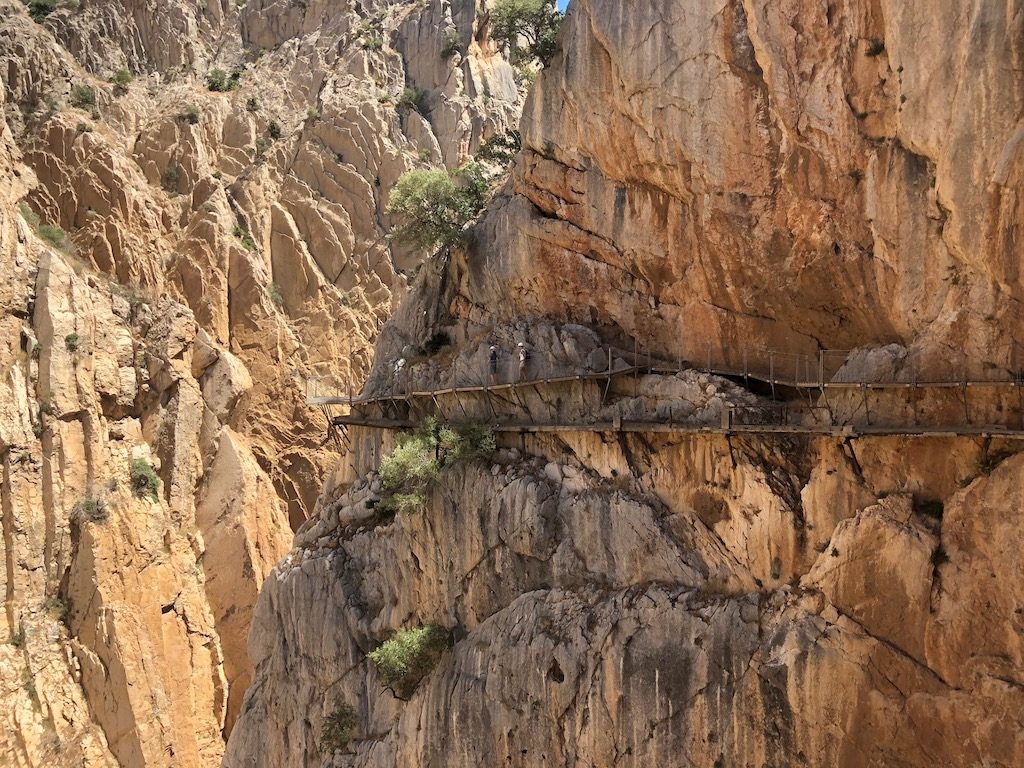 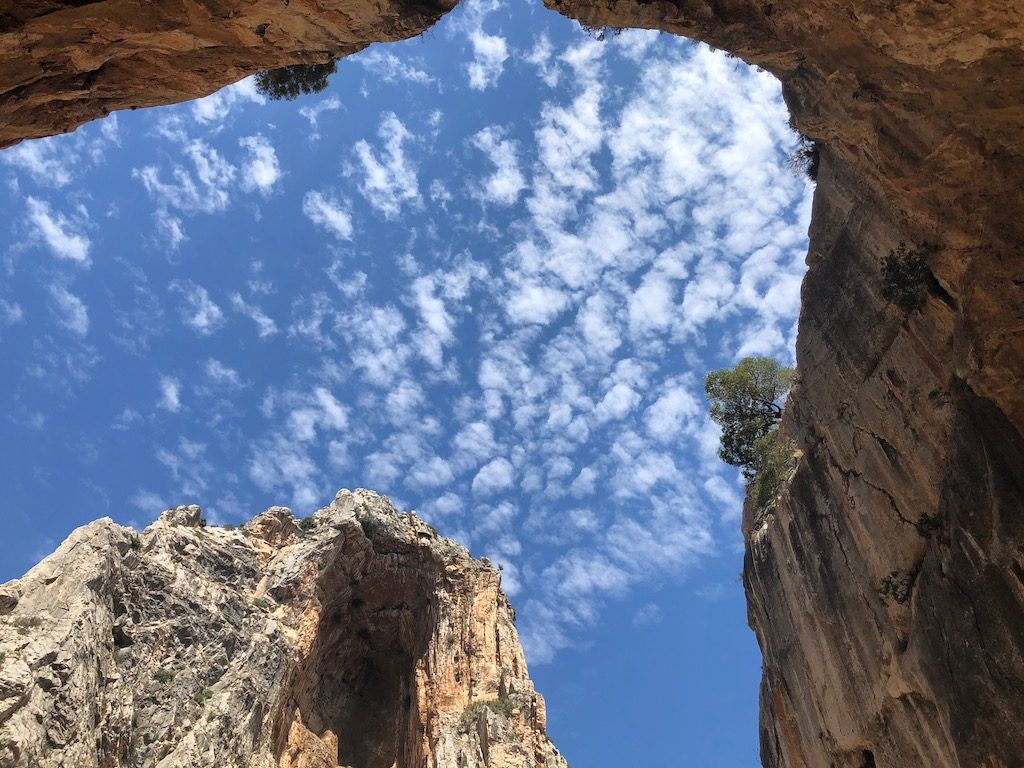 Looking up at the cliffs 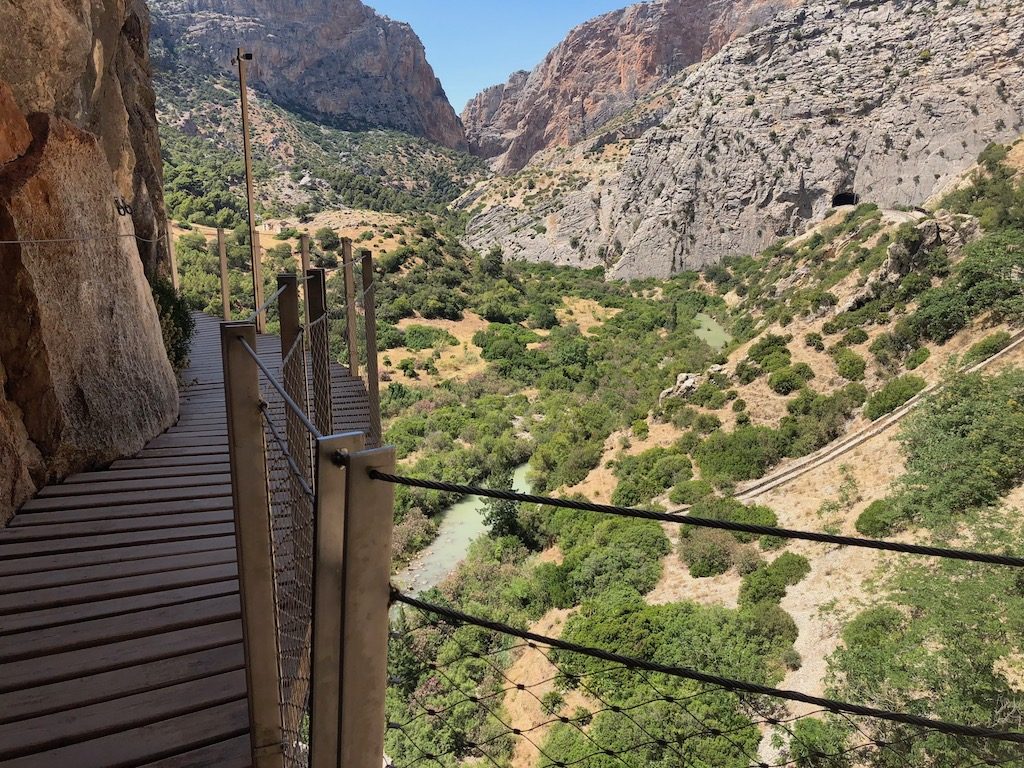 Looking back over Valle del Hoyo 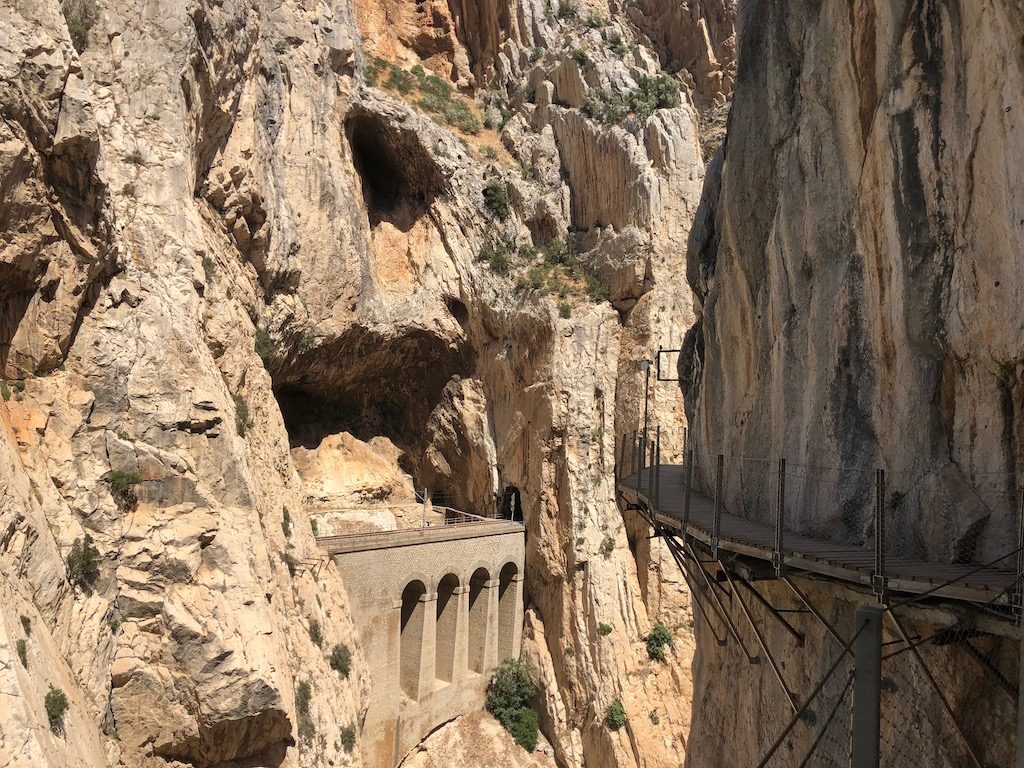 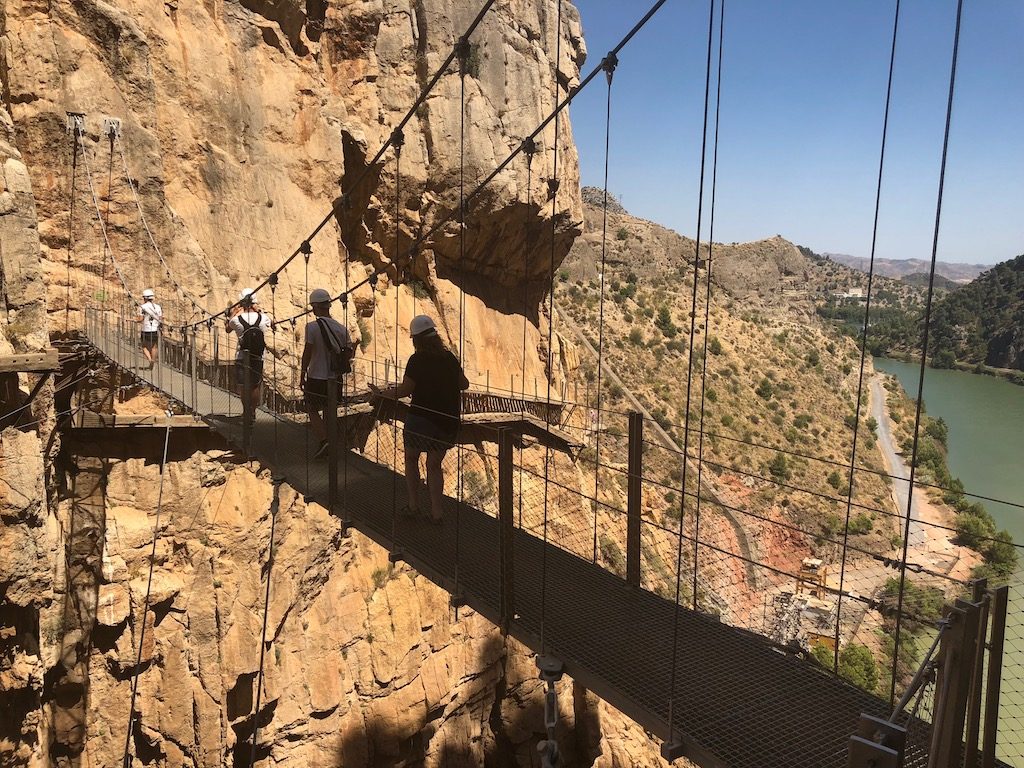 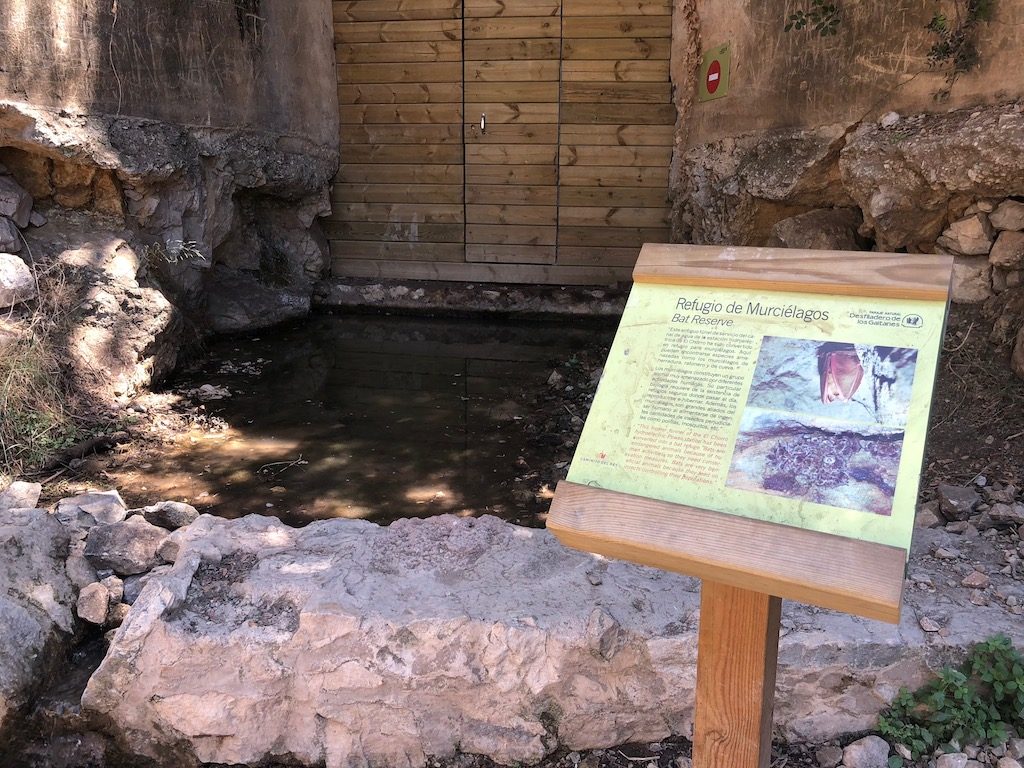 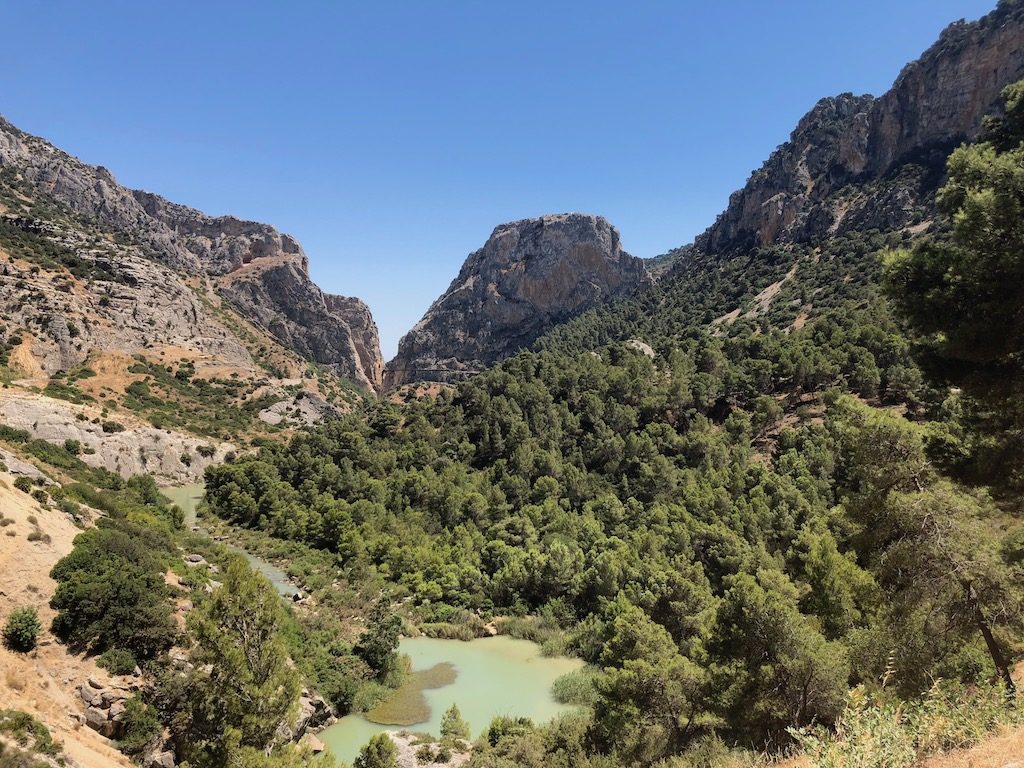 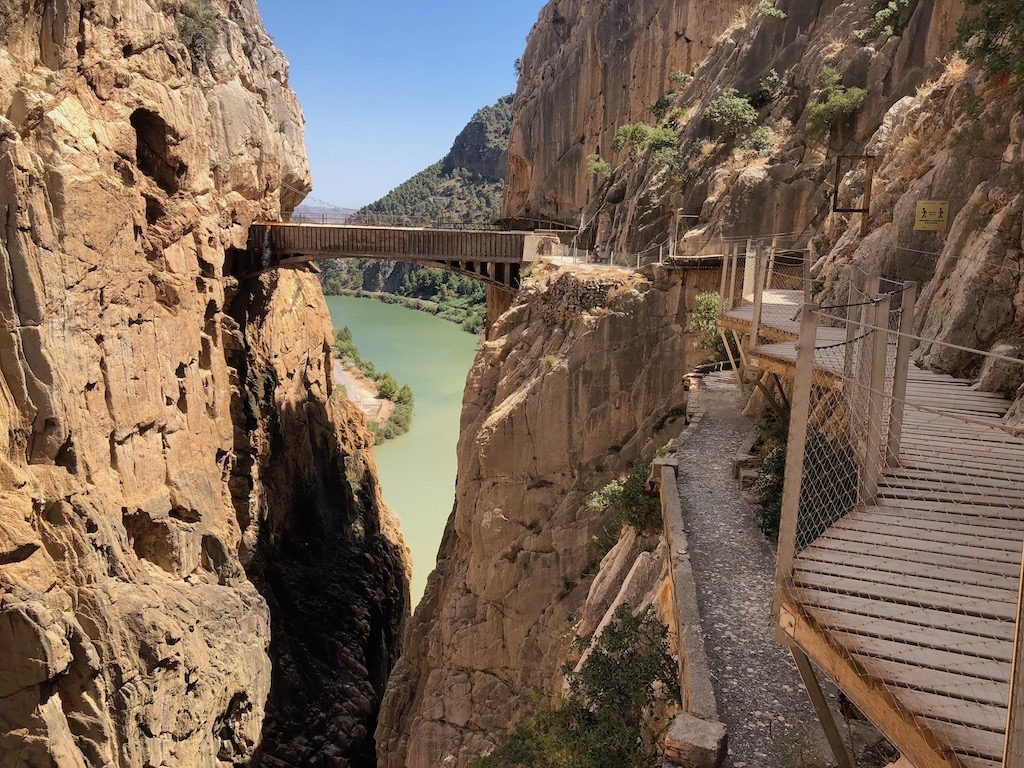 There’s a second gorge to pass through at the other end of the valley, which includes a suspension bridge to cross to the other side – the warning to not exceed 10 people at any time, was once you had crossed!

Once out of the narrow Gaitanes Gorge there was a series of wooden steps to access the South gate before our feet were back on terra firma and a footpath back down to the control centre where you can drop in your helmet.

The Caminito del Rey walk costs €10 and the bus transfer €1.55 per person, the official website to buy entry is www.caminitodelrey.info

This is a fabulous walk through the Paraje Natural Desfiladero de los Gaitanes, we really loved every moment and would highly recommend walking it, if you get the opportunity.