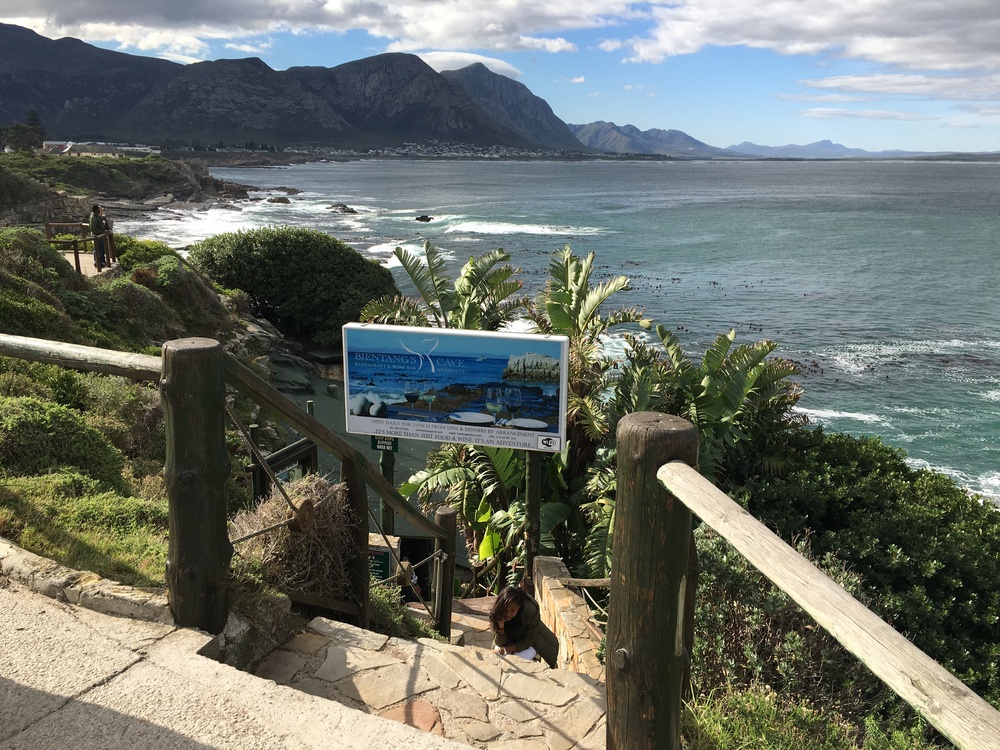 We drove through the spectacular Franschhoek pass to drop down to the Indian Ocean coast and town of Hermanus. Walker Bay is one of the top 12 places in the world to observe whales, this huge bay has been declared as a whale sanctuary and stretches from Hermanus to Gansbaai.

We parked on the cliffs and wandered along the footpath, searching the surface of the sea for any sign of whale activity. June is early in the season and sadly we didn’t spot any whales during our brief visit. August and September are prime months for whale watching on the Western Cape of South Africa. Up to 70 whales at any one time have been recorded in the bay during mating season. The Southern Right whales migrate from Antarctica arriving in South Africa during June, almost hunted into extinction, these whales have been protected in SA since 1935.

In Hermanus they have two festivals to celebrate the whale season the first is Kalfiefees in August to welcome the first whales into the bay and the Whale Festival towards the end of September. The town even has a whale crier, with a horn to let everyone know when there are whales in the bay.

I’d read about the location of Bientang’s Cave, a seafood restaurant set into the rocks at the water’s edge. We weren’t hungry enough for the lunch I’d planned on our itinerary, so decided to have something to put us on until later in our journey. Being this close to the sea, I ordered the Bientang’s Bouillabaisse Soup, which is a classic seafood soup including line fish, mussels, calamari and prawns. Mike, who had ordered cake and a coffee milkshake, had food envy when my bowl arrived accompanied by my Rock Shandy. The soup was just perfect for a cool winter’s day. It was served with ciabatta bread and Rouille, which is a sauce made from olive oil, breadcrumbs, garlic, saffron and chillies. There’s no doubt about it, Bientang’s Cave is a fabulous location, they offer picnic style tables outside down on the rocks at the water’s edge, there’s a few available on a stone walled balcony, plus the restaurant terrace.

You need to book a table in advance at this popular restaurant location during the whale season.