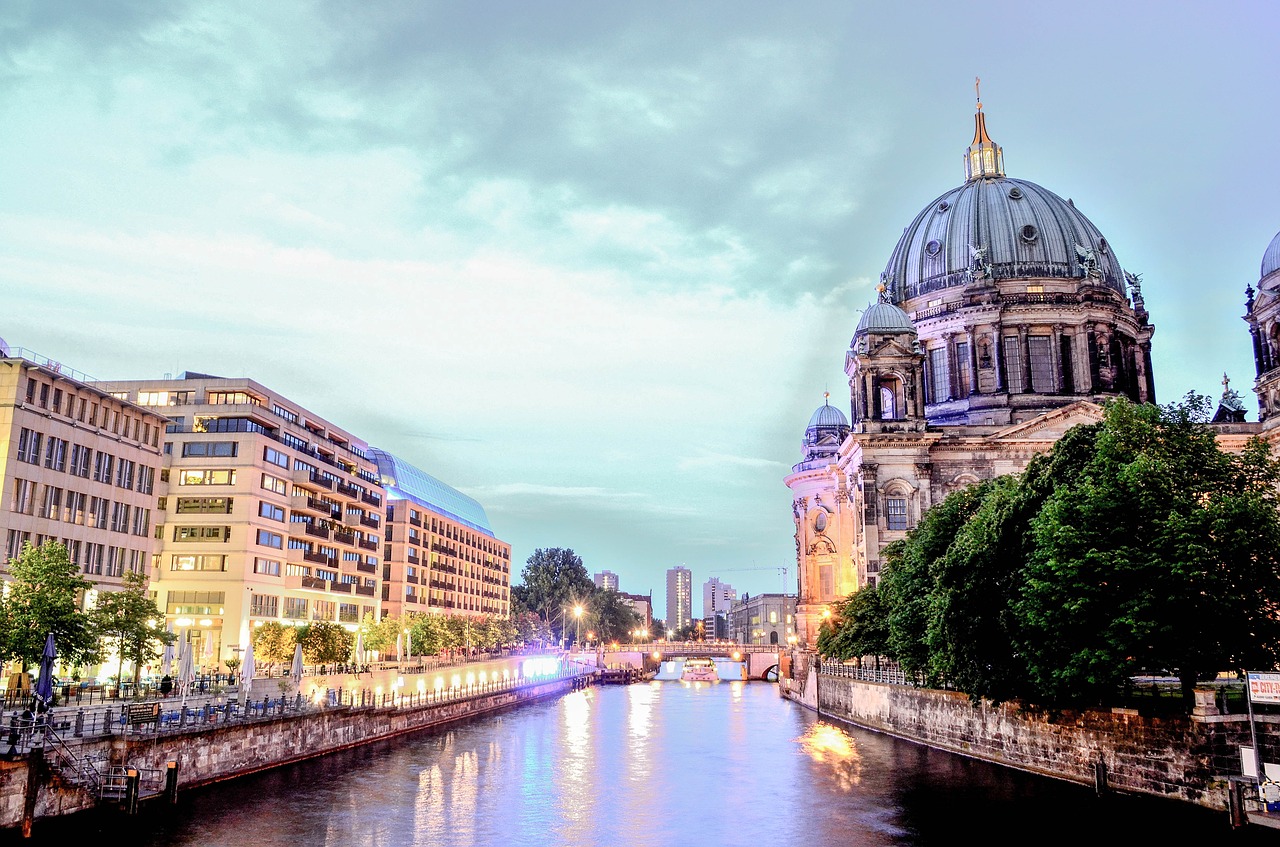 Our next adventure is fast approaching. We decided recently to look at getting away to somewhere cold and festive for Christmas this year, ahead of “peaks”. This is the busy holiday booking period in January & February, when we will be working hard on behalf of our lovely clients, to book their holidays.

We wanted an inexpensive week’s holiday including direct flights from Lanzarote for this trip, so after researching the options, we booked to fly to Berlin on Christmas Eve. We actually first met each other on a corporate trip to Berlin, Mike was asked to look after me, as it was a Volkswagen event and usually full of middle aged men. I was in my late 20’s at the time, his colleague had no idea that this meeting would lead to us dating several months later, and subsequently getting married! I’m hoping we might find some snow, although it usually falls in January, rather than December. We’ll certainly visit some Christmas Markets, as well as getting out and about to explore this fascinating city.

Visit the Weihnachtsmarkt Zauber (Christmas Market) open at Gendarmenmarkt until 6pm on Christmas Eve. It’s the quietest night of the year for restaurants, as everyone is at home with their families. Our mission is to find one of the 1,600 Döner Kebab shops open, which we’ve been assured is “very Berlin” by a local foodie 🙂

The Berliner Weihnachtszeit (Christmas Market) is open on Christmas Day, so we will look for some interesting food stalls, for our Christmas lunch. We’ve requested to visit the Deutscher Bundestag in the afternoon. Their free guided tours aren’t available during our week, so we have requested to visit the dome at sunset and plan to have coffee & cake in the restaurant there. We’re really looking forward to a stroll around the Christmas Garden once night has fallen on the 25th, there’s a 2km trail with fantastic light displays.

On Boxing Day we will be visiting Schloss Charlottenburg for the last day of their Christmas Market. The Baroque palace makes for a stunning backdrop to the 250 stalls, where we should be able to get a fix of marzipan & stollen amongst other festive goodies.

On the 27th we’re going to the Potsdamer Platz, where we can visit another market, Winter World, the Sony Center and take the fastest elevator in Europe, up to the Panoramapunkt in the Kollhof Tower, where we can enjoy a fantastic view of the Berlin skyline.

We’re heading East to the Friedrichshain and Kreuzberg district on the 28th, to visit the 1,3km remaining section of the Berlin Wall and the Oberbaumbrucke bridge which spans the River Spree. It’s also Street Food Thursday at the Markthalle Neun, so that’s dinner organised!

The 29th has been left free so that we have time to fit in things we haven’t considered as yet. It’s unusual for us, as I usually try to fit in too much during our travels! We’re considering a day trip further afield by train. Or maybe a trip up the TV Tower and a shopping experience in KaDaWe will suffice, if we haven’t already ticked those off our list of places to visit.

We couldn’t leave Berlin without discovering where it all began, so our last full day is dedicated to Spandau, where we want to wander the cobbled streets, visit the fortress and Little Venice.

We’ll be back home in time to see in the New Year with friends in La Villa de Teguise, in Lanzarote.

Berlin is one of the top 3 European capitals, alongside London and Paris. It has a fantastic range of modern hotels at reasonable rates, a trendy urban vibe and hundreds of daily events to choose from. The capital is divided into 12 districts, which are known locally as “Kiez”.

Charlottenburg – Wilmersdorf was the centre of West Berlin and offers a luxury shopping opportunity at the famous KaDeWe store amongst others, and the place to visit Schloss Charlottenburg (palace) which dates back to 1695. KaDeWe covers 60,000m2 over 8 floors and attracts more than 80,000 shoppers every single day!

Friedrichshain and Kreuzberg were once divided by the Berlin Wall, with Friedrichshain in the East and kreuzberg in the West. The two areas are joined by the Oberbaumbrücke bridge over the river Spree. The East Side Gallery is home to the longest surviving stretch of what’s left of the Berlin wall. The riverbank has lots of restaurants and this is the district for flea markets.

NeuKölln has a wild cultural mix attracting immigrants from around the world. It’s the place to be for the bourgeoisie. The Kindl Brewery is the main attraction, where you can find contemporary art and the schwuZ famous gay club.

Lichtenberg has a dark history, it was home to the Stasi headquarters and prison for outspoken journalists & political activists. The Artists Village, Berlin Campus and Kaskel neighbourhoods have helped to regenerate the area and attracted young inhabitants.

Marzahn – Hellersdorf hasn’t hit the tourist hot spot as yet, it has an authentic East Berlin chic with huge Cold War industrial apartment blocks that dominate the area. This district attracts photographers, designers and film makers to be based here. The Gärten der Welt has 9 themed landscapes, where visitors can enjoy a Chinese tea ceremony.

Mitte means middle and the Berlin wall ran right though this district. There are two main visitor attractions in this district, the Fernsehturm (TV tower) and Museumsinsel (Museum Island) which has UNESCO World Heritage Status and incorporates 5 museums. Other places to visit include the Bundestag glass dome, Brandenburg Gate and the Memorial to the Murdered Jews of Europe. For summer nightlife in this area, visit the Clärchens Ballhaus which has a mirrored ballroom and large beer garden. At Christmas visit the beautiful Gendarmenmarkt square which has the best festive market according to Berliners.

Pankow is cool and hip, the place most people associate with Berlin. It’s a great area to cycle around, the Berlin Wall Trail is full of cherry blossom in Spring. Visit Helmholtzplatz for street cafés and Mauerpark on Sunday for a huge flea market. In the summer go to Weissensee to swim in the lake, this place is also home to the largest surviving Jewish cemetery in Europe.

Reinickendorff has a beach and harbour on Lake Tegel, where you can take a cruise to Friedrichstrasse. Tegeler Schloss, an impressive waterfront palace is now privately owned, and home to the Humboldt Museum and family graves. Time has forgotten the village of Lübars and it’s beautiful Baroque church.

Spandau was where Berlin started, Zitadelle Berlin is a Renaissance fortress to visit with a stunning view from the tower. Browse the cobbled streets of the Kolk quarter to enjoy cafés, boutiques and good restaurants. In winter the old market square is host to an exquisite German market. Seek out Little Venice, which was a fishing village with canals. The parks and forests in this region are popular with hikers.

Steglitz – Zehlendorf is a luxurious residential area, where the rich and powerful live. The beauty of this area can be visited at the Botanic Garden and Royal Garden Academy.

Tempelhof – Schöneberg this area played a vital role in the Cold War, the Rosinenbomber’s used to take off from Tempelhofer Feld to take supplies to West Berlin during the Soviet blockade. The old airfield has been handed over to the residents as a space for all, instead of being developed. American pilots were stationed at Fliegerviertel, and John F. Kennedy declared his allegiance with the city at the Schöneberg Town Hall. Nollendorfplatz is the centre of the LGBT scene, with an easy going vibe.

Treptow – Köpenick has two points of interest worth mentioning. The AEG Schöneweide was once an industrial complex and is now a huge art development covering 3km. The old town of Köpenick has lovely cafés and a Baroque Palace which offers a step back in time to see how the German aristocrats lived. Berlin won’t cease to amaze, did you know the city has more than 180 museums? 440 art galleries? Or 3 international opera houses? 9 palaces? 2 zoos? 3 UNESCO World Heritage Sites? There are over 3,5 million residents from 185 nations living in Berlin and almost half of the city, 44% is allocated as green space.

Berlin is a city full of inspiration, it’s full of life and ever changing. Their motto is “No time for boredom” and described as welcoming, affordable, mesmerising and also just a little bit weird!

There are 6,500 restaurants, so you won’t go hungry! Of those 1,600 are Döner kebab shops. You can experience street food and weekly markets, as well as fine dining restaurants.

We’ve done our agent training and we’ll be experiencing this fabulous metropolis for oursleves, so please do get in touch if we can help you plan a visit to Berlin.