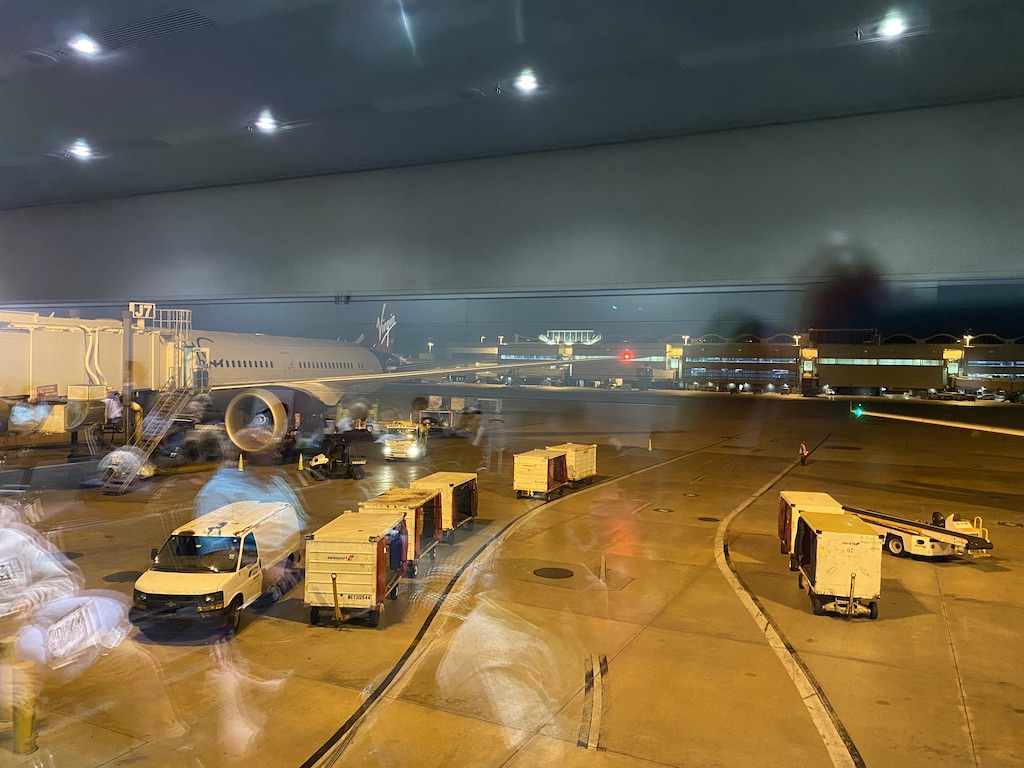 We flew from Miami to London Heathrow with Virgin premium economy in a Boeing 787 Dreamliner, and here’s what we thought.

Virgin Atlantic have a very good app, which keeps you posted on what’s happening with your flight, and it was though the app that we learned of our good fortune. The elderly Airbus A330 that we were expecting for the flight had been replaced by a swish new 787 Dreamliner!

The app also notified us of the meal choice for the main meal on our flight, and we made our selections. It didn’t follow through that well, as the crew hadn’t been told what we’d chosen – it caused some confusion when they thought we wanted a special meal.

Check in at Miami was fast and easy – we love that Virgin, unlike BA, have dedicated check in for Virgin Premium Economy clients.

The aircraft was ready on time, and boarding started on schedule, with upper class, and high level loyalty card holders boarding first. We were in the second group and were able to relax with a glass of Champagne while the rest of the aircraft boarded. The very cool ambient lighting was used to good effect.

The seats in the Virgin premium economy cabin on the 787 are in a 2-3-2 configuration. We’d booked two seats together to give us window and aisle. They were very comfortable and spacious, but one issue was that the leg rests on both our seats, which are attached to the seat in front, were jammed, so we weren’t able to use them.

There was plenty of leg room, and the in flight entertainment system is superb – with a large screen and plenty of choice of movies, TV Shows and games to enjoy.

Our flight took off on time and arrived early, and we had several short talks from the flight crew, but there was an issue with their intercom which meant what they were saying was just too quiet to hear.

Soon after take off, the cabin crew came around with a drinks trolley and ours were served with pretzels. Virgin also has a snack bar which sits between premium and Upper and we were able to go and grab sweets, snacks and drinks from there at any time throughout the flight.

When the food service arrived, it was excellent quality, although a little messily presented, and super hot – in fact too hot. In premium you enjoy proper cutlery, glasses and linen.

After eating, we settled down to sleep. The cabin crew made sure the toilets were kept clean and stocked through the night and came around to serve drinks and water to those who couldn’t get off the sleep.

The Dreamliner is a relaxing aircraft to fly in, with very low noise levels, although the Airbus A380 remains my favourite for “sleeping” flights.

The cabin light brightened an hour out from Heathrow and we were served tea, coffee and a light snack.

We took the chance to use the amenity kits provided to freshen up – each contained a weird recyclable toothbrush – too twisty, and some strange tasting toothpaste.

The service was good throughout the flight, but it wasn’t what we’d been expecting – it’s hard to describe, but it lacked any warmth, and there was no humour or any kind of banter. With Virgin’s reputation, we thought it would feel different, perhaps a little sassy, but it was just polite, efficient and had nothing to distinguish it from, say, Delta.

We arrived early into Heathrow, and enjoyed another benefit of premium economy, getting off before the main bulk of passengers, so the queues at immigration weren’t too bad.

Our luggage was delivered quickly and efficiently and we were on our way to our connecting flight back to Spain.

I was left a little flat by the whole experience. As you can read above, everything was good – the package, the comfort, the on-time performance, the food and the entertainment. It feels a little unfair to criticise it, but having heard people rave about Virgin for so many years, I had been excited to finally try their service.

We’ll certainly use them again, but so far, we aren’t hooked. And as to the Virgin Premium Economy experience, it was worth every penny, and we’d use it again.