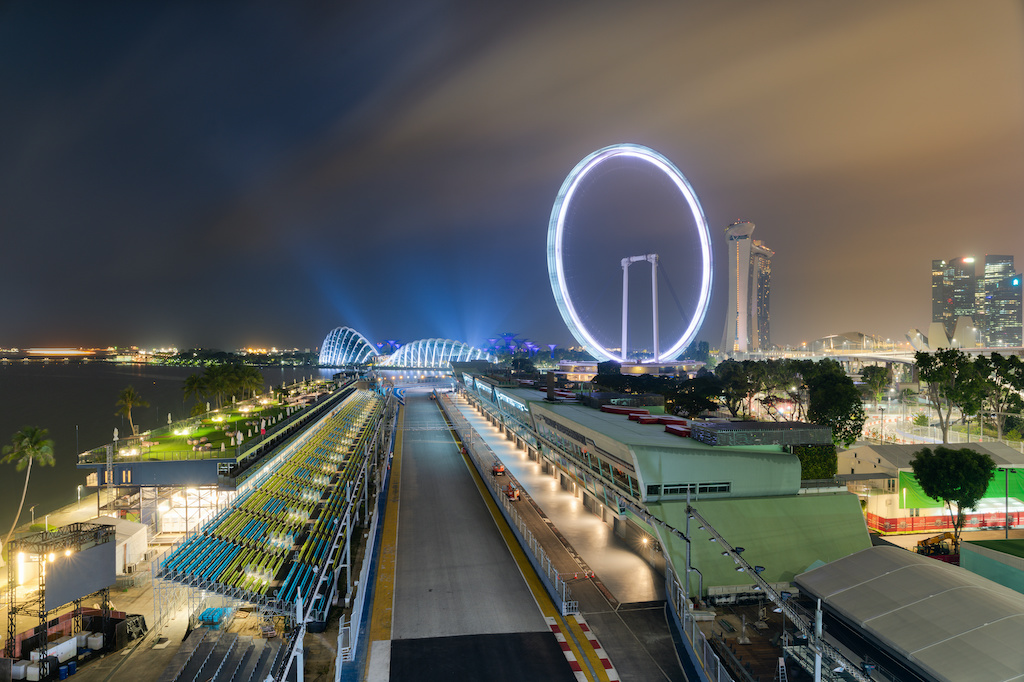 The Singapore Grand Prix takes place at the Marina Bay Grand Prix circuit, and was the first night race on the F1 calendar when it ran in 2008.

Singapore is an island city state at the southern tip of the Malay peninsular, originally founded as a trading post for the East India company by Sir Stamford Raffles. It’s a fascinating, modern and vibrant city with an extremely high income per capita.

Like many street circuits, Singapore is twisty and tight, and being just over 5KM in length, the races are long, sometimes running into the maximum time limit for a Grand Prix, of two hours.

The narrow track and proximity of the walls lead to many incidents during the races, and the chances of safety cars are very high.

It’s a particularly testing race for cars and drives, with heavy braking zones and extremely high heat and humidity. The main area for overtakes is at the end of the main straight into sector one.

The Singapore Grand Prix is rarely an exciting race, as overtaking is difficult, but the location is truly stunning. There are almost always safety car periods, so that makes the strategic element fascinating.

The first night race in 2008, was the subject of much controversy, after Nelson Piquet Junior crashed, handing the win to Fernando Alonso. It later came out that team boss Flavio Briatore had arranged the crash.

Singapore is a place everyone should visit, and any F1 fan should also experience the magic of a night race and the fabulous post race party and fireworks.

Singapore is also a great stopping off point for travel on to Australia and the far east, so you could drop in, watch the race and then go on to enjoy a fabulous exotic holiday.

The pit grandstand at the Singapore Grand Prix is actually reasonable value  and is well worth considering. The Bay grandstand is the least expensive seating at the track and is quite well positioned.

The two best grandstands are turn two premier and turn three. Both have amazing views of the track, both coming towards the stands and going away, but they are very pricey, even by F1 standards.

We can tailor a package personalised to you, so please get in touch if you want to fly out for the Singapore Grand Prix from a different airport, change the hotel, grandstand tickets or extend to combine with a holiday destination.